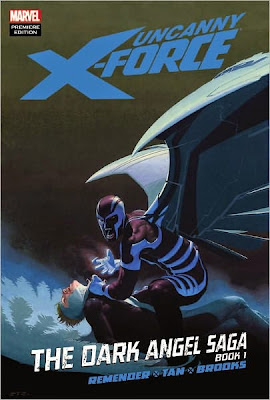 No, nothing confusing about that title at all. This book collects Uncanny X-Force #8-13, and is therefore actually Uncanny X-Force Vol. 3, but nowhere on the "Premiere Edition" hardcover sitting next to me as I type this can I find a volume number: Not on the cover, not on the spine, not on the jacket, not in the fine print below the credits and the "previously" recap.

I'm not sure why Marvel would make it so difficult to find out what order to read their books in—if you don't look in the fine print to see what particular issues are collected here, and remember which issues were collected in the previous volume, there's no real way to tell where this falls in the little library of Uncanny X-Force collections—but whatever their reasoning, the "Book 1" makes this sound like this is the first collection of a new series, or perhaps a spin-off or miniseries, featuring the Uncanny X-Force.

Whatever. Writer Rick Remender continues his very strong, very intense, rather suspenseful long-form story about a top secret, black-ops X-Men squad of assassins, all of whom are deeply conflicted about the whole killing people thing, and are still reeling from the climax of the first volume, in which only one of their members was able to go through with murdering mutant Hitler when he was still a child, before he could grow up to start mutant World War II.

While the previous volumes have been somewhat light on continuity, in that a relative lack of familiarity with the characters' long histories and tangled relationships with the rest of the Marvel Universe didn't do anything to hinder my enjoyment of the comics, with this issue I got a real sense that I probably wasn't enjoying this story arc to its absolute fullest. It rather heavily revolves around past stories involving Apocalypse (which I'm only really familiar with from their adaptations on the awesomely horrible '90s cartoon), and this volume even includes a rather substantial-in-length detour to a popular crossover event from the mid-90's.

The ever-changing art teams change again in this volume, with Billy Tan drawing the first half of the book, and Mark Brooks penciling most of the second half (Scott Eaton helps out on one issue, and two inkers join Brooks, who also inks). I hate to say something as ignorant as the art doesn't really matter here, but it is true that a substantial number of the characters are visually defined almost entirely by their costumes (Deadpool and Fantomex, for example, are covered head to toe in their costumes, making them planes of black and white and gray), and the coloring is purposefully dark and murky, no matter who is doing the penciling or inking, the shadows only pierced by the gray of the costumes, neon coloring effects around computer monitors and technology and, of course, splashes of red for blood.

The art matters, but the changes in particular style don't grate here as much as they might in other books, given the fact that the character designs are so consistent, there's little in the way of "acting" and most of the emotion in expressed through medium shots of acts of violence.

There are four distinct story beats here, all but one of which continuing the ongoing story that Remender has been telling since the first issue—and will keep telling until the end of the series.

First, we learn a little bit about Psylocke's ongoing efforts to help cleanse her lover Angel/Archangel/Warren Worthington of the bit of Apocalypse that's still inside of him—while Wolverine and Deadpool share a moment, and Deathlok and Fantomex talk about the previous story arc and allude to future ones. That's all interrupted when Deadpool goes missing on a mission, and the team takes their flying saucer to a nuclear base that's been taken over by a powerful psychic bad guy—the extremely goofy-looking, fez-wearing Shadow King. He and Psyclocke psychic fight, and while the good guys seemingly win, Shadow King has released Angel's evil "Archangel" persona.

Second, Magneto, wearing an extremely ill-fitting helmet, infiltrates X-Force's X-Cavern HQ in order to ask a favor of Wolverine—he wants Wolvie to kill a former Nazi officer for him. It's all played rather mysteriously, and is a rather quiet issue for the series. Wolverine complies; doing it all by himself, out of costume, and with a samurai sword rather than his claws.

My main take away was that Tan's Magneto needs some work, and there's a scene or two that would have been funny if staged a little better.

Third, we get back to the Apocalypse-rising-in-Angel story, as The Shadow King gives a journalist the "story" of X-Force (which is, remember, a top-secret, off-the-books endeavor), and then Archangel tries to kill the story by killing the journalist. Wolverine and Psylocke stop and cage him, but realize they need to "fix" him before he becomes Apocalypse (And this, incidentally, puts the team back in the same conflict as the first story arc, whether to kill someone in order to prevent the evil deeds they will likely commit in the future; in the first story, it was an innocent little kid, whereas here it's their friend and teammate and, for Psylocke, lover).

To figure out what's going on, they kidnap Dark Beast (Who is, as far as I can tell without turning to Wikipedia, just like Beast, but a bad guy from a different dimension), and he explains that Apocalypse planted his death seed in Angel (ew), and now that Apocalypse is dead, Angel is experiencing his "ascension" as the "heir of Apocalypse." The only way to save him is to cleans the death seed with a life seed, and the only place they can get one of those is...The Age of Apocalypse. (Which X-Men fans of a certain age know is the name of some crossover series or another from the mid-90s, in which Gambit temporarily had a less idiotic costume than he usually wears).

This begins "The Dark Angel Saga" properly, although Angel, Dark or otherwise, is absent from it. Dark Beast leads Wolverine, Psylocke, Deadpool and Fantomex to the dystopian world of the "Age of Apocalypse," joining whatever previous storylines occurred there already in progress. There, dead X-People like Nightcrawler and Jean Grey are still alive, bad guys like Sabertooth are good guys, and Wolverine is Apocalypse, which promises a climax that will include, as Deadpool puts it, "Hot Wolverine on Wolverine action!" (I don't generally like Deadpool, but I like the serious version in a serious milieu that Remender writes in Uncanny X-Force; his Deadpool is more of a Spider-Man like quipper than an out-and-out cartoon character, and I was surprised to find myself so completely agreeing with him when Dark Beast started talking about the Age of Apocalypse and Deadpool interrupts with, "Oh, hey, I'm sorry, you must have mistaken us for people who care about your stupid fake world's history").

Also, the non-mutant heroes on this world are pretty crazy. There's an Iron Man/Ghost Rider amalgam? And an Orange Hulk, who is just the Hulk, only orange...?

Anyway, our world's X-Force teams up with this world's X-Men in order to fight Wolvapocalypse and steal his life seed, which isn't as dirty as it sounds, and with which they hope to save both of their worlds from X-Men-turned-Apocalypses. It doesn't go according to plan, but the whole endeavor made for an interesting clash of the more old-school, goofy X-Men characters and plotlines that I always found impenetrable and off-putting with the more modern, new-reader friendly (or friendlier, anyway) storytelling of this title.

Also, I never realized that I wanted to read a Fantomex/Gambit team-up until I saw the pair sharing panel space in this storyline:

Now I want our Gambit to hang out with Fantomex for a while, and if they threw in Rogue, had them all team-up to fight Batroc The Leaper, and wrote all the dialogue phonetically, that would be awesome.
Posted by Caleb at 5:53 PM