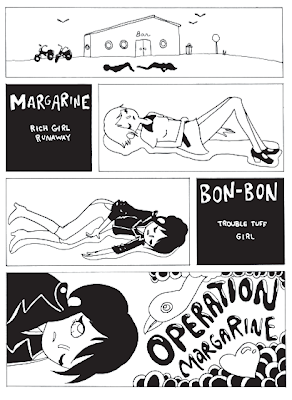 I've got two reviews at places-that-aren't-here to link to tonight. First, I reviewed Batter Up, Charlie Brown! for Good Comics For Kids, and, second, I reviewed Katie Skelly's Operation Margarine for Robot 6.

They are both very good books, in very different ways; the former is a sort of novelty gift packaging of some Peanuts strips along a baseball theme, in a beautifully designed packages, while the latter is a bad girls on motorcycles genre exercise from EDILW favorite Katie Skelly. Guess which book the above image is from.

(Also at R6, Tom Bondurant discusses the history of Dick Grayson and Robin in light of a few announcements of upcoming books made this week; Grayson more than just about any other character suffered from the New 52 reboot and super-compressed timeline. He used to be the kid who was raised and trained by Batman, who lead a team of superheroes for years, who forged his own superhero identity and was generally one of the most well-liked and well-respected heroes in the DCU and perhaps the best leader of other heroes. Now he's just a circus kid who worked with Batman for maybe a year, changed his codename and then went back to the circus. Just about anything of interest about the character—being the adult result of a childhood spent as a kid sidekick, working with and knowing Superman better than any superhero other than Batman maybe,  his universe full of personal connections—is all gone now, so like a lot of New 52 rebooted characters, he's basically just a familiar codename. And I guess they're taking <i>that</i> away in the new series now too? I'm really curious to see how Geoff Johns and DC put Grayson's secret identity back in the genie bottle in Forever Evil #7, because everyone on earth should be able to figure out that if Nightwing is Grayson, then Batman must be Bruce Wayne).
Posted by Caleb at 8:07 PM