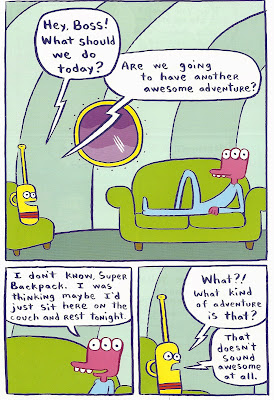 Anyway, I reviewed two books at Good Comics For Kids this week (both of which are also good for adults too), James Kochalka's The Glorkian Warrior Delivers a Pizza (from which the above panel is taken, obviously), and Monsters & Titans: Battling Boy on Tour, which collects artwork from Paul Pope's Battling Boy and an interview with Pope.

While you're at Robot 6, you may want to check in with Tom Bondurant, who discusses the first issue of Aquaman and The Others, after a bit of a history lesson on Aquaman...and The Others. I think he liked the book better than I did (Regarding last night's reviews of Aquaman and The Others #1 and Detective Comics #30, I completely forgot to mention the one rather weird part of TEC...or at least the part that struck me as odd. One of the character's mentions Bruce Wayne's son, saying something along the lines of, "Just wait until your boy becomes a teenager," and Bruce doesn't correct her, just makes a sad face. I guess I didn't realize Batman was covering up the death of Damian which, obviously, would be pretty hard to explain—"No officer, I have no idea how he was run through with a huge blade"—particularly since his body was stolen. Still, if Damian's existence was hard to explain to the public, his sudden non-existence has got to be even harder, right? I imagine that's going to be addressed at some point somehwere...if Damian doesn't get Lazarus Pitted back to life in the next few months here. Or hell, maybe it already has; I read Batman and Robin in trade, so I haven't yet seen what Peter Tomasi's been doing there since Damian died).

Also, I found this post at Robot 6 about Evan Dorkin's almost getting to do the Popeye/Mars Attacks! crossover story interesting—not simply because of how crazy it makes the life of a freelance comics creator seem, but also because Dorkin's pitch seems pretty great. I remember liking the Popeye/Mars Attacks! book that ultimately got published pretty well, but Dorkin's sounds like it would have been awfully fun too. At the moment, I want to say it would have been better than what was ultimately published, although I realize that is likely because it exists merely in the realm of possibility, and there is therefore nothing for me to find wanting about it.
Posted by Caleb at 8:12 PM