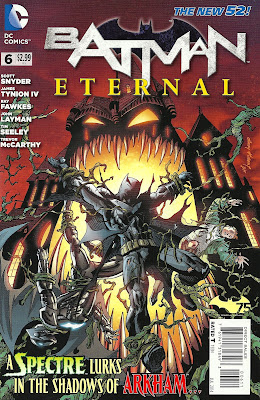 Batman Eternal #6 (DC Comics) Pretty great cover by Andy Kubert this week. It's too bad there's so much clutter on it. The book's logo covers up the evil, anthropomorphized Asylum's "head," there's the tagline, 75th anniversary logo and barcode on the bottom, and then that stack of credits. Too bad.

The credits for this issue shift again, with Scott Snyder and James Tynion IV keeping their "story" credit, Ray Fawkes handling "script" and John Layman and Tim Seeley here being credited as "contributing writers" rather than just "consulting" writers. The fourth artist to draw the book appears this issue, too—Trevor McCarthy. I'm not a fan of his realistic style, but it works well enough. The art on this series has yet to really be a draw for me, as only issue #4's Dustin Nguyen and Derek Fridolfs work in a style I personally appreciate all that much.

The focus of this issue shifts a little too, as we check-in with another member of the Bat-family—Batwing II Luke Fox—who is being assigned another story thread from those introduced in the first issue.

After Batman rescues Batwing from The New 52 Gentleman Ghost, perhaps the single worst redesign of the reboot, he races home, only to be informed that his old friend Jim Corrigan is waiting for him in his library. This was my first exposure to the new, New 52 Spectre/Corrigan, whose presence in this universe at all sort of confuses me (he seems to "belong" on Earth 2, with the rest of the Golden Age heroes). He seems to have been rather radically reinvented, having gone from a tough, hard-bitten police detective (or ex-policeman) to an "occult expert" and magician in a big, green, high-collared coat over a green suit jacket and green pants, with a gold cravat (I think that's meant to be a cravat or scarf of some kind). He's also lost his white streak of hair, and it's unclear if he's a ghost or resurrected dead man, or simply a living man with The Spectre in him. (he's different enough that I actually wondered if Snyder and Tynion had originally planned on using Jason Blood, Gotham City's resident occultist with a powerful supernatural force bonded to him, but were unable to use him for some reason).

Corrigan says he plans on investigating the occult goings-on at Arkham while Batman's busy with the A-plot of the weekly series, and Batman promises to send him one of his agents, oddly choosing Batwing, who proved just a few pages earlier to be no good with the occult.

What's going on in Arkham exactly isn't clear. We're introduced to a new player who is not Deacon Blackfire, and this new player seems to be in charge, but the art in this entire sequence is sort of muddled and hard to read (the character is shown reclining on a throne of cardboard boxes and severed arms with fresh, red blood on them). (There's also a panel in which it seems like Maxie Zeus has had at least one arm cut off, which is kind of weird if true; has Zeus even had a story in The New 52-iverse yet...?). 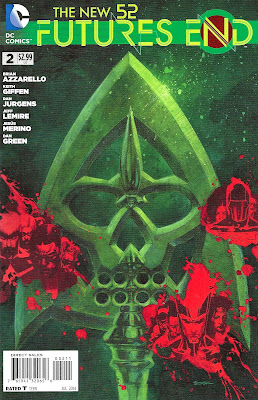 The New 52: Futures End #2 (DC) After two issues of death and destruction, this third issue of the series (which started with #0, if you're questioning my counting abilities) is a relatively quite one. In fact, no one dies at all!.

It does revolve entirely around a funeral, however.

This is probably also the best issue of the series so far. The nightmare future and central premise already laid out in the first issue, and the cast introduced in the second, this issue focuses on New 52/FYL Firestorm as he attends the funeral of Green Arrow, who he failed to save last issue. In the process, we're introduced to Mr. Terrific, who seems like he'll be awfully easy for Batman Beyond to bring himself to murder, given what an a-hole he is (I think I've mentioned this before, but I know next to nothing about New 52 Mr. T, beyond knowing how much I don't know—I'm not sure which Earth is his home Earth and which one he's currently situated on). And we get a look at the superhero community five years from now. Aquaman will have a different costume, Black Canary will wear Count Vertigo's cape for some reason, Superman, Batman and all of the Robins will be MIA (unless that's Superman wearing the weird Cobra Viper helmet and S-Shield...?), Arsenal will have a cool costume and look like a superhero for the first time in years, and there will be at least one guy I don't recognize (the guy wearing the American flag like a cape).

There are a lot of references to "the war" and things that have occurred in the last five years, which reminded me of DC's "One Year Later" jump ahead in time, where the entire universe shared a "missing year" which was meant to gradually be filled in during the course of weekly series 52 (though it was mostly ignored). There's also a mention of the fact that at some point Apokolips "chased the survivors of another Earth to our own" above an image of Gree Arrow holding a sign reading "Two Worlds One Humanity." I wonder if that will actually come to pass, and Earth 2's superheroes will come to the New 52's Earth Whatever This Is (Earth-New 52, I calls it)...? That could prove interesting, but it would also sort of defeat the purpose of having an Earth-2, as it would mean the DCU would once again have multiple Flashes, a guy named Green Lantern with different powers and backstory than the other Green Lanterns and so on.

Anyway, this issue has a lot of clues and teases and some actual character work, demonstrated through dialogue. It's actually a better first issue to a series than either #0 or #1 were.

Oh, and there's one more new character introduced. Or re-introduced, I guess: The New 52/FYL King Faraday, who doesn't look like King Faraday at all. He's just a dark-haired FBI agent with too-fancy a vest.

Pretty great cover this time around, too. I really like that Green Arrow death arrow, and the longer I look at it the more I see to appreciate in it. 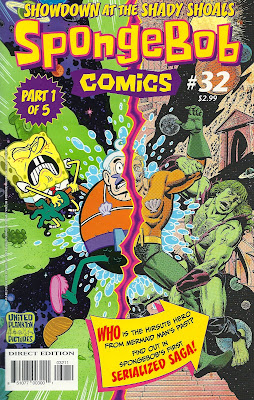 SpongeBob Comics #32 (United Plankton Pictures) This issue features the first part of this book's first multi-issue story, but, if you're a fan of the current gag strip format, don't worry; only the cover story continues into the next issue, while there are still a half-dozen other standalone SpongeBob comic strips of various lengths, from a page of James Kochalka to a ten-pager by Vince Deporter.

That five-part serial? It features a Mermaid Man comic within a SpongeBob comic, as SpongeBob (written and drawn by Derek Drymon) is reading a classic Mermaid Man comic (drawn by the great Jerry Ordway) only to find that the climax of the story is missing. He decides to visit the aged Mermaid Man and Barnacle Boy at Shady Shoals retirement home to find out how the hero's battle with Viro Reganto ended, only to find that the aged Viro Reganto is also living there...right across the hall, in fact.

It's always a pleasure to see Ordway drawing superheroes, and there's something particularly pleasurable to see him doing so in this context; here, after all, is a story about an older superhero recalling his glory days, drawn by an older superhero comics artist in a style a classic style that recalls the art of his former publisher's glory days.
Posted by Caleb at 8:29 PM

You really should have checked out Justice League Canada, or whatever it's called. I kid you not, a character gets his arm chopped off. It's like DC is just trolling us now.

I suspect you're right about Jim Corrigan originally supposed to be Jason Blood. I think I remember reading a solicit that mentioned the Demon a few months ago.

Fortunately I've read Doug Moench's run on the "Spectre" ongoing series from the late 1980s, where Corrigan basically acts like he did in this comic (working as an occult expert and considering the Spectre to not be the same person as he is) so I'm already conditioned to consider this an acceptable characterization for him.

My main worry is that the Spectre is so much more powerful than Etrigan, what's to stop him from just stepping on whatever the villain ends up summoning?

Oh, I did read it, but I didn't cover it here, as I didn't buy it from the comic shop. I kinda liked how McKone drew the scene, with that particular panel being all white, red and black, to emphasize the shock rather than the gore but, eh, guys getting their arms cut off in DC super-comics is really like white noise to me at this point.

I guess it's sorta surprising that it was The Savage Hawkman who lost his arm, but I suppose that Ultra can just make it grow back or something. Really disappointed in how random and dumb that series has been so far. Nice art though!

Yeah, I'm not sure if The Spectre is as powerful as he used to be, and if he has the same M.O. (murdering murderers), but, if so, he doesn't fit real great with the Batman characters, as he should, by rights, just turn into a giant and step on everyone in Arkham Asylum. Corrigan may investigate for a while, but The Spectre would solve that case in, like, a minute.