Sometimes I wonder about this woman.

Wonder Woman was created in 1941, was one of the very first female superheroes to have her own comic book, was one of the first comic book superheroes to have a television show based on her adventures and is one of only a handful of characters, along with Superman and Batman, whose comic book has been in continuous publication since her debut. Month in, month out, you would find a Wonder Woman comic book at the newsstand, or on the spinner rack, or on the comic book shops shelves almost every month for the last 73 years.

Despite two cycles of sustained popularity as a film genre, however, Wonder Woman has never appeared in a feature film like her peers Batman (nine films and counting), Superman (six films and counting), more recent characters like Spider-Man (five), Iron Man (four), Thor (three) or The Hulk (three). Even footnote comic book characters from the Big Two superhero universes like Blade have made it into theaters—repeatedly. (And this weekend I Marveled at the fact that I saw such relatively recent, minor characters like Bishop and Blink appear in a major motion picture, before which played a trailer for Guardians of the Galaxy, which is filled with characters from among the most obscure corners of the Marvel character catalog).

The reason usually given for this is that doing a Wonder Woman movie would be too hard or too complicated; Warner Bros. apparently turned down a proposal of a Wonder Woman film set during World War II (like Captain America: The First Avenger) by the guy who would go on to make Avengers instead. I don't know that that's necessarily true. As a character most people have already heard of an know a lot about, there's no reason to think a Wonder Woman movie would be any more difficult or complicated to tell than one starring John Constantine, or Green Lantern II or Jonah Hex.

But sometimes when I'm reading a DC comic, I'll come across a scene that portrays Wonder Woman in such a bizarre light, as a shrill, savage, bloodthirsty warrior more akin to Marvel anti-heroes like Wolverine or The Punisher that I'm kind of glad that Warner Bros hasn't attempted a Wonder Woman film yet (I mean, they had Superman break a guy's neck, imagine what their Wonder Woman would do!), and I think I even sort of see why they think the character might be hard to build a film franchise around.

It might have something to do with the fact that they have no idea who Wonder Woman is. I certainly don't recognize the woman in the scene below, written by Geoff Johns, DC's chief creative officer: 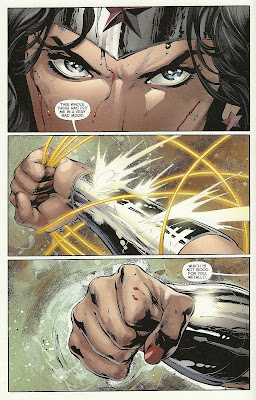 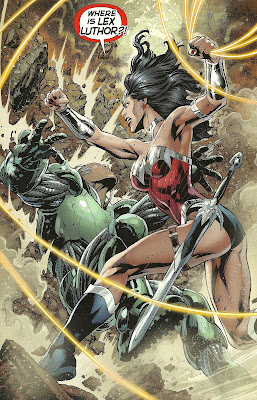 That is Wonder Woman beating down the cyborg villain Metallo in an attempt to find Lex Luthor, who, as she says in the first panel of the third page, deserves to have her "sword in his throat." (The context shouldn't really matter that much, but I suppose it's worth noting for those of you who are interested. Why does Wonder Woman want to find and maybe kill Lex Luthor so badly? No idea. When he was last seen, in the pages of Forever Evil #7, he and his associates had defeated the entire Crime Syndicate and saved the world in the process; he then proceeded to perform brain surgery on Wonder Woman's ally and current boyfriend Superman, saving his life).

What's particularly frustrating about this scene isn't just how crazy Wonder Woman seems—and hey, this being comics, maybe she's actually the Crime Syndicate's Superwoman masquerading as Wonder Woman, or a White Martian shape shifter who has replaced Wonder Woman, or any number of other explanations, but this scene sure scans with the violent, semi-psychopathic Wonder Woman we most often see strangling people with her lariat.

No, what's frustrating is that she is trying to get information out of a bad guy by beating it out of him, when she's carrying a magical lasso that compels bad guys to give her information if and when she bothers to use it on them, instead of her fist, foot or blade (She does eventually use it on Metallo, off-panel; apparently she needed to beat the bejeezus out of him and argue about due process with Flash on-panel first). Wonder Woman, unlike Batman or even Superman, doesn't ever really have to intimidate or slap-around a perp in order to interrogate them; she only has to get her hands dirty when she wants to. Which seems to be pretty damn often.
Posted by Caleb at 8:28 PM

I thought the direct-to-DVD animated Wonder Woman movie was pretty much perfect. They could just expand that script and have an awesome movie.

I do have to say I kind of like violent Wonder Woman. It reflects her growing up in a warrior culture and also makes her personality distinct from other heroes, so she's not just a sex-reverse Superman.

There hasn't been a Wonder Woman film because the only two attempts at solo female-lead superhero films (Elektra, Catwoman) have been horrid. That, and has barely been able to support her own ongoing series the past 10 years.

First, wait until someone figures out what to do with the character that people are actually interested in, then start considering other media.

Here's how the wonder woman book's sales have been per the Beat:

Basically around 30K for 10 years now.

Thor's had more success in general, but not by a ton (those 80Ks are inflated by the #1s). And he's had TWO movies.

Guardians of the Galaxy was at 27K!

Ant-Man doesn't even HAVE an ongoing and hasn't for years.

Wonder Woman is a magical superhero princess. If DC Entertainment/Warner Bros knew what they were doing, they would already have an animated Wonder Woman movie out there for audiences that enjoyed Frozen and Tangled.

Not only does DC not have that, they haven't produced a Wonder Woman comic book suitable for kids to read since the mid-1980s. The closest you get is her role as a supporting character in the Justice League series from the late 90s, and even there they barely knew what do do with her beyond having her on the team and suggesting a romance with Batman (Hawkgirl was much, much more fleshed out as a character than Wonder Woman was.)

They could have taken the reboot as an opportunity to re-imagine Wonder Woman and take back the in retrospect horrible continuity reboot of the character that Len Wein and George Perez and Karen Berger made in the 80s. (Revolutionary at the time it shouldn't have stuck). Instead they doubled down on it and have made her more and more of a Wolverine like character.

Red Sonja is an interesting character, but she isn't Wonder Woman. The Wonder Woman we've had for the past few decades has been Red Sonja engaged in Wonder Woman cosplay, and it doesn't work.

(Azarello has done some interesting things with the actual Wonder Woman book, but apparently nobody at DC actually reads the book because his character is noticeably different from the one appearing in Justice League. As in, he's actually writing a character and not a caricature.)

Jer, I'm not sure about no one having recently made a Wonder Woman comic suitable for kids to read. I know that the child version of me would have absolutely adored Brian Azzarello's current run on Wonder Woman. You get to see all kinds of cool monsters from Greek mythology, really cool designs for the Greek gods, plus there's tons of awesome fights that don't skimp on the gore.

Now, other kids weren't giant Greek mythology buffs like me when they were little, but I'm sure all the monsters and violence would still hold their interests.

I haven't read as much of the George Perez stuff from the 80s, but I think I would have liked it as well. It also appears to have lots of monsters and fighting. There isn't quite as much gore, which would disappoint some kids, but there's enough to get by.

You're in the same camp as DC, I guess, who think it's age-appropriate for 9 year olds to see Wonder Woman strangle someone to death with her magic lasso (see last week's issue of Justice League Beyond 2.0 - rated 9+!), but I think that's a bit gruesome for a 7 year old myself.

Jer, when I was seven I was really into Greek mythology, that's one reason I love Wonder Woman so much today. If I could handle the fate of the House of Atreus or the Bed of Procrustes I think I could handle Azarello's WW. I'd recommend it to any kid that loves Greek myths and isn't too squeamish.

Heck, when I was seven I wrote stories that were way more violent than Justice League Beyond. In second grade I wrote a poem about a giant lion-porcupine monster stalking a wild boar and tearing it to shreds. The rest of the class loved it.

I remember when adults tried to control what I watched and read when I was little. Fortunately I was usually smart enough to evade them. When I got older I realized that this wasn't youthful foolishness. My young self was in the right and adults were in the wrong. Whenever I hear a parent complain that modern society makes it hard to control what their kid sees I smile and hope the kid is taking full advantage of it.

I can't agree enough with this blog post. The New52/Nu52/Pu52 Wonder Woman is so poorly written, especially by Geoff Johns, that it has become a displeasure seeing her featured in comics, such as the pages shown.

With Wonder Woman running around with a sword, slashing and punching, she rarely uses her passive weapons such as her lasso. Of course, when she does use it, it is used as a noose or around the villains throat (as mentioned last week by Lex in the same issue I believe). With this evidence, it is no wonder that Geoff Johns gave such short shrift to the CSA Superwoman. With a "good" Wonder Woman behaving in this way (and with the raping and murderous Amazons as her heritage by Azzarello), how is an "evil" Wonder Woman supposed to behave?

This goes to show that Geoff Johns has such a little understanding of Wonder Woman that Superwoman from the Crime Syndicate received no origin or background in Forever Evil -- she is little more than a uterus to house the next great menace.