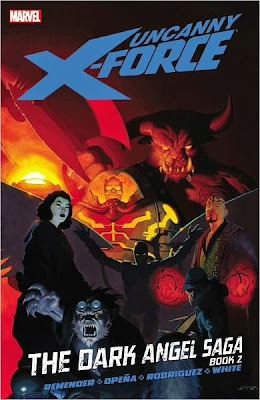 The "Dark Angel Saga" that began in the previous volume, much of which was spent with the members of the title team who weren't Angel journeying to the alternate world that "Age of Apocalypse" was set on in order to get some techno-magic Life Seed with which they hope to cure their ally Angel/Archangel/Warren Worthington, who had "ascended" to become the new Apocalypse.

If none of that means anything to you, this particular collection of the series—the fourth volume, although Marvel's pretty terrible at labeling these things—isn't the place to start, but Rick Remender and company's Uncanny X-Force actually is a rather strong comic book series, and I'd recommend it as a superhero action/adventure narrative that manages to wrestle with questions of morality and ethics while, having its cake and eating it too, constantly showing its various take-no-prisoners, more-violent-than-most-mutant anti-heroes waging violent and bloody battles.

After the mostly successful campaign in Age of Apocalypse-Land, our heroes Wolverine, Fantomex, Deadpool and Psylocke (all wearing matching black and gray uniforms, except for Psylocke) return to their headquarters in order to purge Archangel of Apocalypse, but find the Apocalypsified Archangel there waiting for them, along with his own super-team (Dark Beast, Genocide and current Horsemen War and Famine). After a brief melee, Archangel captures his lover Psylocke, who he wants to stick a Death Seed in and make into his bride or whatever, but the rest of the team escapes.

Much of the book's remaining 110 pages are so are devoted to the conflict between Archangel as the New Apocalypse and his followers, who include the Earth-AOA emigrees Iceman and The Blob among the previously mentioned characters, as well as the rather substantial cult of followers built up around Apocalypse (of which I was ignorant of before reading this series; as I've said before, most of my X-Men knowledge comes from the 1990s cartoon, rather than the comics that cartoonw as based on).

Archangel and Psylocke are engaged in a battle of rhetoric, as he tries to convince her to willingly submit to the Seed and join him and she tries to convince Warren Worthington to fight back and regain control of himself from his other personality (They also physically fight another off and on, as well). And the rest of X-Force fight their way into and through Apocalyse-Angel's forces, with Fantomex relying on a series of escalating attacks in an attempt to bring his former teammate down (First, he journeys back to the world of AOA in order to bring that world's X-Men here to help them, then he releases the clone of Apocalypse he's been growing and teaching via a virtual reality world since the end of the first volume of the series, Genesis—who will play a pretty substantial role in Jason Aaron's excellent Wolverine and The X-Men comic).

The good guys win, naturally, but at a pretty great cost. Psylocke does have to kill her lover Archangel, but, this being comics, he only kinda sorta dies—he is reborn immediately, but with no memory of his previous life at all.

It's a pretty propulsive read, all action and arguments, with a few jokes (Thanks, Deadpool!) and several rather inspired scenes of crazy fantasy. "Saga" is a pretty big word, one that's gotten smaller thanks to over use in super-comics, but this multi-part storyline, which Remender's been building to through the whole series so far, but which takes up about half of the previous trade and all of this one, really earns the word. "Epic" might have worked too, but would sound like a little much in the title of the book.

The final issue collected herein is a breath-catching, status quo re-jigger, between-arcs issue, drawn by Robbi Rodriguez in a cartoony, angular style that is in sharp contrast to every issue of Uncanny X-Force that's preceded it.
In that issue, Wolverine comes clean to Beast and Kitty Pryde about the heretofore secret existence of X-Force (which was meant to be a black-ops assassination squad kept secret from everyone but its members), and asks them to enroll both Genesis and the new, amnesiac Angel in the Jean Grey School. And one of the AOA visitors opts to stay behind, that world's Nightcrawler, who looks just like the late, Earth-616 Nightcrawler, save for a dumb tattoo of some kind (he's also a coldhearted killer). He opts to stay behind in order to hunt down and kill any of the escaped bad guys from his dimension still hiding in Uncanny X-Force's dimension.

Jerome Opena draws the bulk of the pages in this book. All of 'em, in fact, save for Rodriguez's final issue and a series of scenes that take place on the psychic plane in the penultimate issue (which Esad Ribic draws). He does his usual fine job, selling even the most garish and fussy of the characters' costumes (Psyclocke, Archangel, everyone from AOA), and really doing a rather fantastic job on many of the action scenes, especially those involving Archangel, who kills with a swipe of his wings (In general, Opena communicates the violence of such acts through Archangel's expressions even mores so then the way in which he draws the flashing, slashing wings which, when attacking, are composed as much motion lines as they are anything else).
I liked how he drew Archangel's wings at rest, too; when he's not flying or chopping people up with his wings, he keeps them folded and limp behind him, forming a long, flowing cape of metallic knife feathers.

And speaking of drawings I liked, here's the cover for Uncanny X-Force #19, drawn by Raphael Grampa: 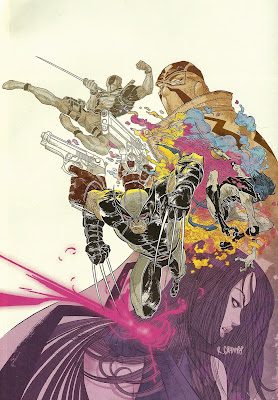 Not even close. A great first arc followed by a fairly depressing decline which pretty much wrecks that first arc. It becomes laughable by the end, which I don't think is what Remender was going for. I realize my opinion is a minority one, but that doesn't mean it's wrong! :)

I am in the camp of "Uncanny X-Force" was a pretty solid superhero book. And the art by Opena is amazing.