There's a new Godzilla movie opening this weekend at a theater near you, and that seemed like a good enough reason to read every Godzilla comic ever (and watch every Godzilla movie ever, although I'm still only like midway through the Showa series), so I put together this brief history of Godzilla in American comics piece that ran at Comics Alliance today.

I've discussed some of those comics in formal reviews here on EDILW in the past, and I will likely discuss the rest here at some point in the future. I'll also discuss the new film, which I just returned from seeing about an hour or so ago, although I'm not sure if it will be in the next installment of Everything Else" or in a standalone pose; techinically, Godzilla's not a comic book character, so I'm not sure if I should give his new film a post of its own or not. Either way, I still have to write up my thoughts on Amazing Spider-Man 2 before I get to Godzilla.

In short though, it is not a very good movie (awesome trailer, though!), and while it's much better than the 1998 American Godzilla film, it repeats many of the same mistakes, including a new, more "realistic" design that, while closer to the original Godzilla than Godzilla '98's "Zilla," still doesn't look right.

And, in fact, Godzilla '14 doesn't look anywhere near as cool as the version of it that Arthur Adams drew on the cover of Godzilla: Awakening, the official movie tie-in graphic novel published by Legendary Comics: 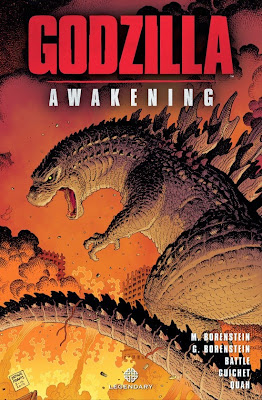 I tweeted my initial reactions to the film on twitter, because I tweet, because I am a young, hip, with it, social media savvy type cat. My initial thoughts on the design?

Now that I've given it more time to settle into my brain, though, I guess it makes a certain amount of sense. This is Godzilla's 30th film, and he's been making movies for 60 years now. Maybe he's just in his Marlon Brando-in-The Island of Dr. Moreau phase of his career...?
Posted by Caleb at 8:27 PM

He just looks so...happy in that first scan!

Yeah, I agree in with SallyP, the first scan has Godzilla looking strangely emotive. That face is highly unsettling.