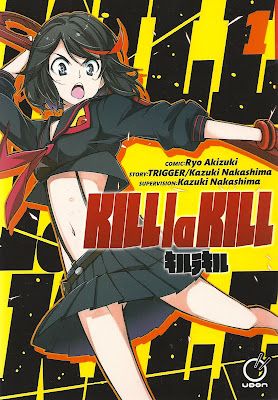 The Japanese school uniform is one of the most distinct and omnipresent aspects of manga, especially among the manga that makes it into translated and re-published form here in the United States, where the uniforms are immediately noticeable for their other-ness. In the U.S., only private and parochial schools have uniforms, and these tend to simply look preppy and/or involve a lot of plaid, rather than being derived from military uniforms, as so many Japanese school uniforms are (Not to overstate things, but remember one of the first and biggest anime/manga imports from Japan was Sailor Moon, which featured a heroine whose school uniform transformed into a superhero version of itself, and whose name was partly derived from the uniforms itself).

In Kill la Kill, a popular anime series whose manga adaptation arrives in the states this month, Japanese school uniforms inform the entire premise of the series, which is, in and of itself, an interesting concept.

If, like me, you haven't seen the anime, the setting is Honnouji Academy, a prestigious school ruled by iron fist by Student COuncil President Satsuki Kiryuin. The student body is divided into a clear hierarchy, with the many students wearing special "Goku Uniforms," which give their wearers incredible strength, speed, endurance and other powers; they range from one-star goku uniforms to three-star goku uniforms. 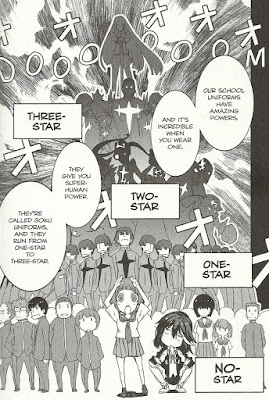 Thematically, it's not subtle. "The uniforms that this country makes its students wear are based on military uniforms," Satsuki explains at one point, "In which case, we at Honnouji Academy wshat treat our uniforms as combat uniforms. They shall be symbols of our control over the pigs in human clothing." She and the members of her student council are in the process of conquering all of the other schools in the country. In the book's opening scene, a teacher is lecturing about the rise of Hitler when a battle between a three-star and one-star student breaks out.

It's into this environment that a ronin transfer student wanders. Her name is Ryuki Matoi, and she wields what looks like one of those ridiculously large and sometimes oddly shaped manga/anime swords, but it turns out to be something quite different and more appropriate for the story: It's one half of a pair of giant scissors. She found it sticking out of the body of her murdered father, and is now in search of whoever possesses the other half. Naturally, the giant scissors are powerful enough to cut into even a goku uniform.

It's not enough to help her win a battle against any of the Academy's fascist rulers, of course, but she gets a more powerful weapon when she stumbles upon, well, here's where it gets really weird–a sentient sailor suit uniform that both feeds off her blood and gives her the strength and fighting abilities to go toe-to-toe with anyone in a goku uniform. 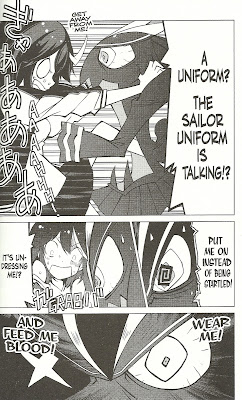 Think Sailor Moon meets Venom then, and you can start to see much of why Kill la Kill is as popular as it is, even if that description doesn't really do it justice, but just touches on some surface elements. The suit, by the way, is ridiculously tiny when in battle mode, allowing Kill la Kill to have its cheesecake and eat it too, as Akizuki draws Ryuki's exposed flesh in a barely-there uniform, while every single character makes fun of how weird it is that anyone's wearing something so small. 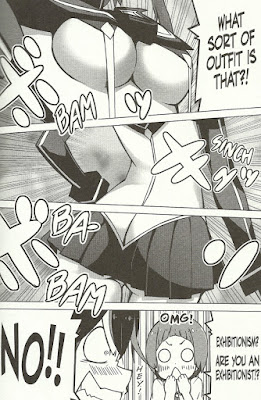 That is, apparently, only the suit–which she calls "Senketsu" or "Fresh Blood"–while it is in battle mode. It also appears as a too-small-for-school two-piece suit that leaves at least a little to the imagination (that's it on the cover).

In addition to its exploitation and exploration of the Japanese school uniform and its mixture of over-the-top action and fan-service, Kill la Kill also literalizes the idea of social hierarchy in school, externalizing conflicts–real or imagined–between kids of different social strata into epic super-brawls. I don't know how well it works in the anime, which I've never seen, but in Akizuki's manga adaptation it works quite well indeed. 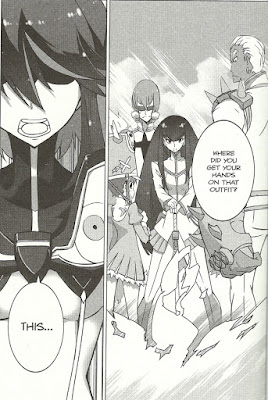