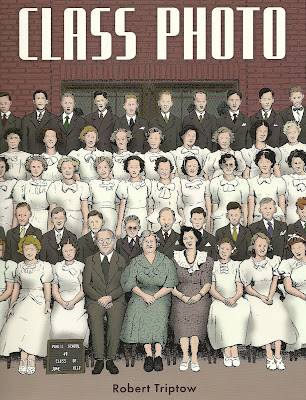 You guys all read Comics Alliance's weekly column, "Best Comic Books Ever (This Week)"...right? That's the feature where various CA contributors all suggest some of the week's most promising-looking releases. In this last week's installment, one of the book's I suggested was Robert Triptow's Class Photo. That is the cartoonist's book-length work based on an old, 1937 class photo he found in a garage a long time ago, hung on his wall and used to use to amuse his guests, making up weird stories about the kids pictured there, and what became of them. Essentially, he just re-tells the sort of stories he would tell his guests, only in comics form.

The story I was most excited about was that of Ashtabula Krug, maybe the only woman–fictional or real–I've ever come across who was actually named after my hometown of Ashtabula, Ohio. It's not a city that gets mentioned in pop culture at all, really, with rare exceptions including mentions in 1951 Frank Sinatra/Jane Russel/Groucho Marx movie Double Dynamite, Jack Kerouac's On The Road, Bob Dylan's "You're Going to Make Me Lonesome When You Go," Jon Lovitz's "It's no skin off my Ashtabula" in A League of Their Own, and the rather tedious 1960 Vern Sneider novel, The King From Ashtabula. 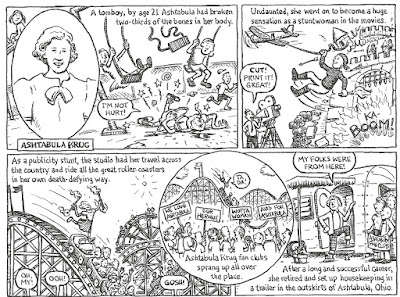 Triptow's done his homework. Ashtabula's newspaper is The Star-Beacon, and while it's masthead never read The Ashtabula Star-Beacon in my life time, it may have during Ashtabula Krug's. 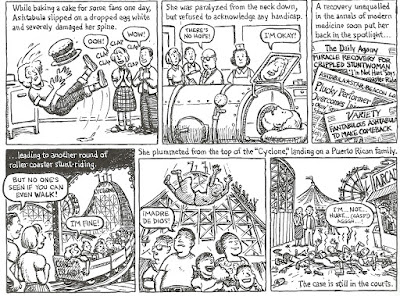 As many of the stories in the book criss-cross narratively, the very next page is about Daisy Bulch, who followed classmate Krug to Hollywood, where she played the non-action parts of Ashtabula's movies, all of which have completely awesome titles: 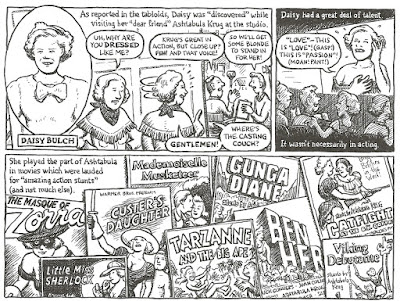 For more on Class Photo, click here.
Posted by Caleb at 7:55 PM