Previously, in "The Darkseid War"... 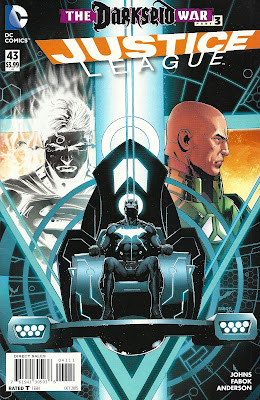 Artist Jason Fabok does for something a little more symbolic and more carefully designed this time around, limiting the characters to just three and using a literal triangle for outline the trio of figures. In the center, and at the point of the triangle, we see Batman, in his new role as The Know-It-All Jerk Who Sits Atop The Mobius Chair. This was the role previously filled by Metron, the New Gods' god of knowledge and laziness, but Batman stole Metron's seat last issue, in an attempt to keep the chair, and all of its knowledge, in the League's possession.

This, apparently, makes Batman the first New New God. Note that the chair seems to be changing Batman, giving him a goofy glowing Tron version of his costume, more than Batman is affecting the chair; why, he hasn't even been able to add bat-wings to it yet!

Batman's also shooting eyebeams, which he doesn't do inside the comic, but this may be symbolic of his newfound ability to see all. It also helps bisect the image (as does the vague column of light behind the chair), dividing the busts of archenemies (but current Justice League teammates) Superman and Lex Luthor.

You will note that Superman looks like a black-and-white photo negative of himself, and appears to be steaming. What's up with that? We will have to read on, to find out!

Another "cinematic" opening, as the first page has a half-dozen, thin and horizontal panels stacked neatly, Fabok's art–colored by Brad Anderson–suggestive of a camera slowly zooming in. We see what appears to be an eye-less pit-bull chailed to the floor in a room full of humanoid bones. Someone clubs it to death with a pair of silent blows, then lifts a phallic lip to his pierced nose, and licks it.

The splash page that follows reveals this to be Kalibak, here drawn monstrous in size (as will become clear when Steppenwolf approaches him), rendered by Fabok in much greater detail and more realistic proportions than the character's creator Jack Kirby originally imbued him with.

The result? He looks more like someone you might run into on the street, and less weird, monstrous and scary.

Does he still have those weird, two-toed feet...? It's difficult to tell from this comic book, as Fabok manages to avoid drawing the character's feet in all but one panel, and that one is an extremely long shot (page three, panel three). He appears to have the normal amount of toes, though, or at least the boots he's wearing covers up his feet so that they appear to be the normal shape of your average humanoid foot.

"Leave," Kalibak tells Steppenwolf in a bigger, bold font than most characters get to talk in. "I'm busy."

He's busy beating to death chained monster dogs and then eating them, maybe...?

The two evil gods banter a bit, with Steppenwolf telling Kalibak they are headed to Earth to fight. Kalibak makes it clear he fights not for Darkseid, but for Kalibak. 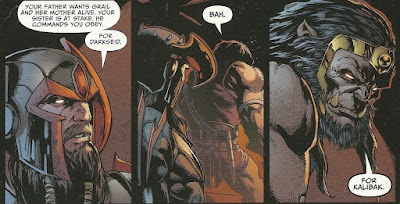 Steve Trevor and the Justice League try to convince Batman to get off the Mobius Chair, but he's not budging. He insists they need the information it contains, and that he can handle it, but he's already glowing funny and talking in a new font.

Meanwhile, Superman and Lex Luthor find themselves on Apokolips, where Lex's sister sent them after repeatedly shooting Lex. While the frenimes (or are they more enefriends...?) wander about an Apokoliptian slave camp, it becomes clear that Superman is weakening: His hearing is less sharp than Luthor's, his X-Ray vision is on the fritz and, when they are attacked by a horde of extras from Mad Max: Fury Road, Luthor notices that Superman is bleeding.

This has nothing to do with his de-powering in Superman, Action Comics and the rest of the DCU line; "Darkseid War" is apparently set before the events of Convergence. No, Superman is losing his powers because, as Lex says, "There's no sunlight."

I don't want to second-guess Luthor, one of the smartest men on the planet, nor Geoff Johns, the guy writing this story, but I would think it would take quite a while for Superman to lose enough of the solar energy stored in his Kryptonian cells to de-power him so drastically...especially if he's not expending a ton of energy (Johns might have wanted to rearrange events so that Superman was forced to use a "solar flare" attack either just before or just after being transported to Apokalips; that would have been a more logical way to believably de-power him almost immediately).

Kanto and Lashina arrive in the Myrina Black Cave, looking for Myrina Black and Mister Miracle. They're not there.

Grail, Darkseid's Daughter, uses her own Mother Box (in the shape of a weird axe), to draw a summoning circle with which to call for Darkseid. Her ally The Anti-Monitor chills in the background, while Shadow Demons circle him in the air, and others kneel before him, bowing reverently like they're in some sort of old movie, playing natives worshipping an idol. 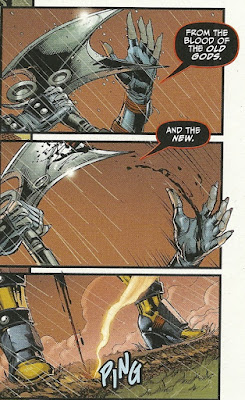 Because she does. I just noticed that.

The League are still talking when Mister Miracle Boom Tubes onto the scene, and Batman and his chair starts exposition-ing. In the space of a few pages, plans are formed.

Miracle will lead Wonder Woman and most of the League to face The Anti-Monitor, in an attempt to get him to leave Earth before Darkseid arrives to fight him.

Batman, his chair and Green Lantern Hal Jordan are going to head to "the depths of The Multiverse" (Hooray! No one ever gets sick of DC screwing around with their ever-changing Multiverse!) to seek answers about The Anti-Monitor, in case they need to force him to leave Earth. 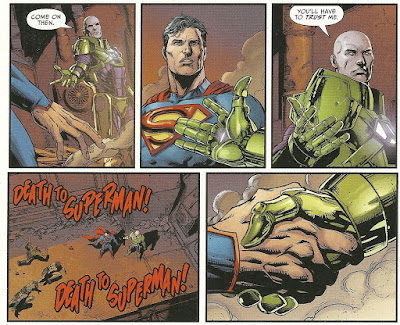 Wonder Woman and her fellow Leaguers Boom Tube to where Grail, The Anti-Monitor and the Shadow Demons are waiting.

The lay-out on these two pages is a little crazy, as Darkseid, Kalibak, Steppenwolf and a bunch of Parademons arrive via Boom Tube (see the image at the top of the post). Four elongated letters–B-O-O-M–for "panels" that are actually just one big splash panel, reaching over one page and crowding into the next page. Darkseid's feet are rooted in the bottom of the four panels, the misshapen M panel, but the rest of him stands outside the panels containing the forces behind him.

Filling most of the rest of page 19 are a stack of five panels. The Anti-Monitor and Darkseid stare each other down, while Power Ring asks Wonder Woman who they should fight. Wonder Woman thinks about Scylla and Charybdis.

Those are the sea monsters of Greek myth she's thinking of, by the way, not the terrorist super-villains who stole Aquaman's powers and had his hand chewed off by piranha in the early '90s.

A double-page splash, featuring the titanic Anti-Monitor and Darkseid striding towards one another, while their armies run and fly at one another. Framing the image in the foreground are the hands and hips of Wonder Woman, on the left, and Mister Miracle, on the right.

The action jumps back and forth from Apokolips to Earth, almost panel-by-panel now.

On Apokolips, Luthor flies the weakened Superman up into the sky using his suit's rocket boots, while Parademons pursue them.

On Earth, Wonder Woman leads the Justice League in a charge, although it's not clear which side they're taking, if any.

Back on Apokolips, Luthor explains he's going to drops Superman into a fire pit, as Superman's cells need reacharged by solar energy, "and these fire pits on Apokolips are that." Is that true? I didn't know that was true. I'm not sure how they would or could be solar energy either, since they are coming from a planet rather than a star, but again, I'm just going to take Lex Luthor's and Geoff Johns' word on this, since the former is super-smart and the latter is the writer.

As Superman falls and disappears, the two evil cosmic entities on Earth reach one another and throw punches. Before we can see if they connect or not, there's an explosion in a fire pit, and a tail-less baloon says the name "Luthor" in normal font. 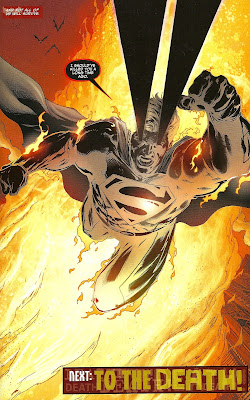 A climactic splash page, showing a transformed Superman flying out of the pit. He looks like a photographic negative, as the cover of this issue already spoiled.

"I should've killed you a long time ago," he says in the white font on a black, red-rimmed dialogue bubble, of the same sort Batman and Grail are talking in. That must be the official dialogue style of the New New Gods.

Is that the best term for them? What about All-New Gods? All-New, All-Different Gods? The New-er Gods? The New 52 Gods...?

They've always been massively inconsistent about how much solar charge Kryptonians (and Tamaraneans and Daxamites) can hold. I remember an issue of Green Lantern where Krona turns the sun of Daxam from yellow to red, and Daxamites start falling from the sky. It was a cool image, but I kept thinking that their charge should have at least lasted long enough for them to land safely. (Also, it seems that somehow red sunlight diminishes the charge faster than zero sunlight).

Very Good Comic... this story is interesting. I do not like batman is now a god - as always give great importance to Batman- seems to be working more on other characters - not everything should turn all arround Batman. - I like the story of Superman and Lex Luthor, he is on track.