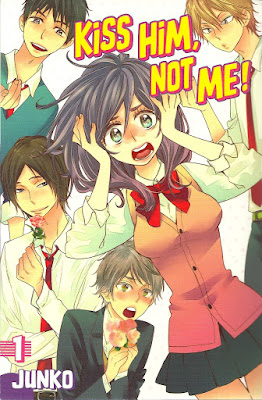 I enjoyed this fairly weird high school comedy quite a bit, but I don't think there's any way around the fact that a lot of potential readers will find themselves turned off by its central conceit, which is likely to be viewed by many as, well, problematic.

At its center is a fairly typical standard of teenage pop fiction, the ugly duckling who suddenly becomes a beautiful swan, but here that transformation isn't accomplished via a makeover or Pygmalion-style coaching, but rather by fairly straightforward weight-loss. The fat girl gets skinny, and is suddenly super-hot.

The girl in question is Serinuma Kae, an avowed fujoshi (here, "a passionate fangirl of anime and manga that objectifies male characters and male-to-male sexuality") who manga-ka Junko draws with a big, round, bun-shaped head, huge glasses over her mole-like tiny eyes and the only body in the whole manga that looks like that of, say, someone you might see in real life, out shopping, rather than an idealized high school student. 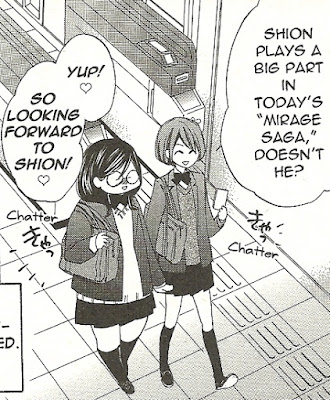 Kae isn't unhappy with her appearance, though. "Who decided the Prince should be with the princess?" she thinks in the book's opening panel, "The Prince with another Prince! IT SHOULD BE LIKE THAT!!" While she "ships" certain cute boys in her class, and is friends with one of the hottest guys in schools, she explains that "Even if I have a connection with hot guys... It's meaningless to me...My happiness comes from peeping on the sidelines, uninvolved in the magic before me. That's where I belong!" 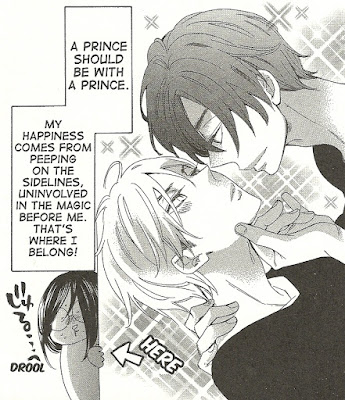 Those guys start to disagree when the unthinkable (to Kae) happens: Her favorite character in her favorite anime is suddenly killed off, plunging her into a deep depression. She spends an entire week in bed, not eating, and when her mother and brother finally drag her out from under the covers, they find her magically transformed:

Yes, simply by starving herself for a week, Kae is now not only hot, but shockingly hot.

So you can see why this might be problematic. I've thought about if there was perhaps another way around this, without involving actual magic; some way in which a girl who wasn't hot could suddenly turn into the most desirable girl in her school and, well, nothing quite seems to work. A sudden onset of puberty would have to involve younger kids, a makeover wouldn't be dramatic enough and any alternate form of sudden beautification wouldn't tie directly into her mourning the loss of an anime character, anyway.

Kae gets so sad she stops eating, and as a result loses a bunch of weight and becomes attractive–take it or leave it. (She does get some help dressing cute from her best friend Ah-Chan, who shares her fujoshi status, but hides it, while Kae is out and proud).

In a rapid fire sequence, we re-meet the four boys introduced in the first scenes–best friends (and her OTP) Igarashi and Nanashima, pretty boy underclassman Shinomiya and her fellow member of the history club Mutsumi–all of whom now ask her out, more-or-less simultaneously. 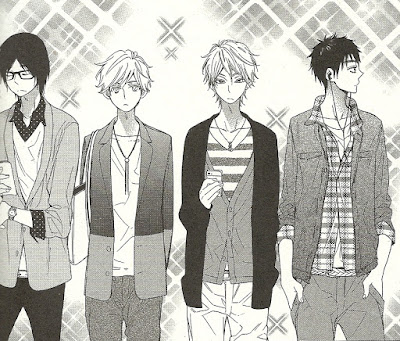 She agrees...to all of them, and begins dating all four boys. At once. As in, on the same date, so that Kae has several different dates in which she and a small harem of cute guys all go out together. Flustered by any and all attention they show her but still driven crazy by the thought of the boys with one another...well, it's in the title, isn't it? There's the additional complication that she must try to hide the degree to which she's a fangirl from the boys, lest they be terrified by the level of her passion (by the end of their first date, however, she gets all five of them matching phone fobs of her favorite character). 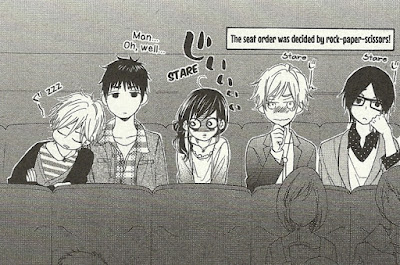 Despite the questionable fat = ugly, skinny = pretty message, Junko makes Kae a fun and funny character before and after her transformation, with only her appearance really changing. Her defining characteristic remains her fannish interest in boys with boys, and even when boys are interested in her, that doesn't change (In other words, her lack of interest in boys wasn't something she defaulted to because she was unattractive to them; that's who she was). Additionally, while all four boys are different and all four have various strengths and weaknesses and gradually start to become real friends with Kae, it's clear from the beginning that one of them is better-suited to her than the others.

That would be Mutsumi, who she was friends with, and who was the only character who recognized her after her transformation, something even her mom and brother failed to do.

"Ah, Serinuma-san," he greets her simply upon seeing the new her. He's in the school nurses office, trying to disinfect the wounds he sustained while rescuing a cat from a tree:


"Changed?" Well, yeah, I suppose you've gotten skinnier while you've been gone...but I can still tell it's you, y'know? You kindness hasn't changed. You're still Serinuma-San.


So there's the pair that Junko and her narrative seem to be shipping, even if the protagonist is too distracted by shipping her other suitors to one another to really notice.
Posted by Caleb at 7:47 PM