A little more on the first couple of new Marvel Star Wars collections. 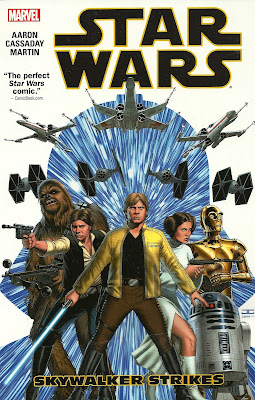 In general, I was quite impressed with both. Dark Horse Comics had done such an incredible job with the license to the Star Wars franchise for so many years, and Marvel's licensed comics of late have been so lackluster and just kind of weird (think the Dark Tower comics, Halo, the Castle-related books, the Once Upon A Time comic, etc) that I remember actually being a little scared when it was first announced that Marvel would be reclaiming the license.

In fact, I think my first reaction was a snarky tweet along the lines of "I wonder which artist Marvel will be pairing with Brian Michael Bendis for their new STAR WARS comics." I was pleasantly surprised, then, that the comics I read–just these two, so far–were actually quite good.

While those GC4K reviews are as thorough as I'd want to get with either book, and accurate reflect my feelings about both collections, there were a few random observations I had while reading them. Which I will now share with you here. Because what am I going to do, have a thought about a comic book and not commit it to writing on the Internet...?

•I can't tell you how excited I was to to find that Jason Aaron was not starting his Star Wars ongoing with the rebels looking for a new secret base from which to hide after the Battle of Yavin IV (i.e. when they blew up The Death Star at the end of the first movie; I never understood why they don't refer to that as "The Battle of the Death Star," as everyone knows what the Death Star was, and only fans know what Yavin IV is. I imagine it's the same in the the Star Wars universe, right? Surely every sentient being would have heard of the giant, moon-sized, planet-destroying, orb-shaped laser gun, or at least be more likely to have heard of that then some random celestial body chosen by the rebels for its relative obscurity, right?).

That was at least part of the premise of the Brian Wood-written Star Wars series at Dark Horse, the one that used the same cast and time period as this book, and it feels like it was the driving plot behind the first one million issues of the original Marvel Star Wars series (I'm still on Dark Horse's Star Wars Omnibus A Long Time Ago... Vol. 4, but it seems like the original Marvel series was dedicated to the rebels trying to find a new base for a few years...right up until The Empire Strikes Back came out, and then it was all about Luke, Leia, Lando and Chewbacca trying to "find" Han, even though it always seemed pretty clear that Boba Fett was going to take him straight to Jabba The Hutt). 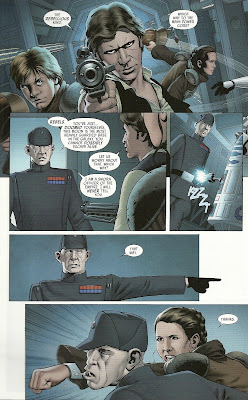 •Leia seemed to be the more bad-ass of the two Skywalker twins. The first issue features Han posing as an emissary for Jabba, and Luke and Leia are disguised as his bodyguards, wearing the same disguise Lando would wear in Return of The Jedi. They're attempting to infiltrate an Imperial weapons factory, and at one point they turn on the nearby Stormtroopers.

It's Leia who gets the tough-guy moment punctuating the scene, as she punches out the Imperial and says "Thanks" after he's given them the information they need. (That information was scared out of him by R2-D2, who is basically the Batman of the Star Wars gang). 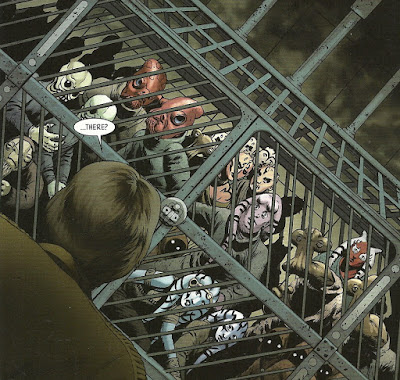 •I suppose I shouldn't have been, but I was pretty surprised by the inclusion of prequel trilogy races in this series, which is set in the original trilogy. It seemed slightly wrong and off, but then, I guess I'm just not used to the later films informing the setting of the earlier films; it's basically been the reverse forever, with all the comics and books and cartoons being pumped out stuck foreshadowing the "future"e vents of the original trilogy.

There are more subtle allusions too, as when Darth Vader prepares to lop off Luke's head using two light sabers, the same way Anakin finished off Count Dooku in Revenge of The Sith, an far more obvious ones, as when Darth Vader flashes back to various scenes of his life as Anakin with Padme at the climax of Darth Vader Vol. 1, an unfortunate scene if only because it forced Salvador Larroca to try his hand at celebrity likeness.

•I really like AT-ATs/Imperial Walkers. And one figures pretty prominently in this first Star Wars collection. Han and Leia try to escape the facility in one, they try stepping on Vader with it, and Vader fights it hand-to-hand.

When I first heard they were going to do Star Wars spin-off movies featuring certain characters, my initial hope was that there would be a Star Wars: AT-AT, and it would just be 90 minutes of an AT-AT walking around and stepping on stuff.

That, or maybe The Haunted AT-AT, which sould be like DC's old The Haunted Tank concept, only with the Force ghost of a fallen Jedi general from the Clone Wars filling in for General Stuart. Or maybe The Fast and The Furious, but with AT-ATs.

•I don't think there's anyway around it: Star Wars: Darth Vader Vol. 1–Vader is a terrible name for a trade paperback. Whenever you have a colon in the title of your comic book, you're going to get in trouble when it comes time for the collections, as if you want to include a sub-title you have to either use a double colon or a dash, as they do here; neither of which looks good. If you have a colon in your title, you're better off forgetting sub-title and just using volume numbers, as in manga collection. But If you were going to use a sub-title, why on Earth use have it be half of the same name that is your title?

•I'm not a particular fan of either Cassaday or Larroca's style, although they're both good at what they do, and reading the entire run of Invincible Iron Man kind of turned me around on Larroca a bit. The latter is at his best when not drawing humans, so he's in pretty good shape here, as there are hardly any human beings at all; just a lot of droids, aliens and guys in masks that make them look like robots. Although so much of the book is devoted to not drawing humans that, when a few finally get introduced, they look super-off.

•Seeing Darth Vader on Tatooine seemed pretty wrong to me; partly because I was assured in one of the old Expanded Universe novels that Vader would never set foot there, and partly because it makes him seem a bit more like a chump that he returned to his home planet and never, like, felt Luke's or Obi-Wan's presence, never put two-and-two together at all. 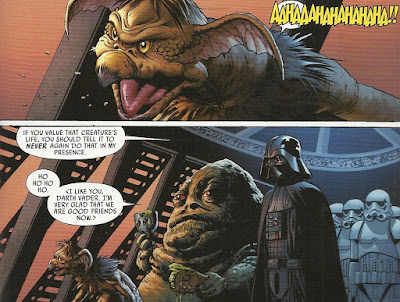 •I did like his reaction to Salacious Crumb, though. 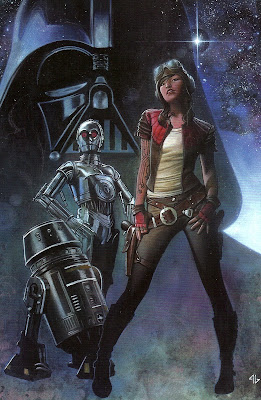 •The cover for Darth Vader #3 was pretty awful; I'm not sure why Doctor Aphra is striking a sexy, Bond girl-on-a-movie poster pose, like she's a model showing off the latest in finger-less gloves and blaster-holster belts.

It's not at all reflective of her character within the story.

•Kieron Gillen's story doesn't really deviate far at all from Dark Horse's several Darth Vader minis-series, most of which were actually pretty excellent. He's scheming against The Emperor, The Emperor is testing him and treating him like crap and the pair have two completely different agendas.

•By far the best part of Vader is the creation of two dark, evil versions of C-3PO and R2-D2. We've previously seen an astromech serving Vader in a few panels of one of the previous miniseries, and I was kind of fascinated then by the concept of an "evil" R2, who was to R2 as Vader was to Luke.

This one is BT-1, not an astromech, but a "blastomech" droid. Aphra explains that it "does enough to pass as an astro, but it's primarily a cove. It's a specialized assassin droid." He doesn't really look as cool as Vader's old black astromech, and Larroca's art and Edgar Delgado's colors make him look more gun-metal with lots of color than shiny black. The square-shaped head further distances him from R2. He certainly packs a lot of weaponry though: 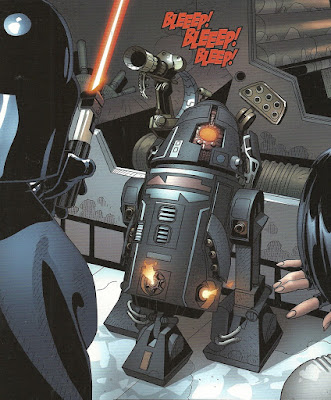 I was much more impressed by 0-0-0, or Triple-0, the evil version of 3-PO. "I'm a protocol droid, specialized in etiquette, customs, translation and torture, ma'am," he says, introducing himself to Aphra. 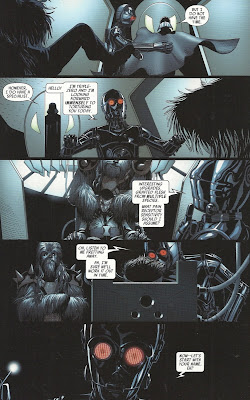 He looks identical to 3PO, save instead of gold he's a shiny dark gray, and his eyes glow red. He walks and talks just like 3P0 too, which makes his dialogue about torture and killing seem all the funnier, as I hear it in Anthony Daniels' voice.

•As much as I liked Vader's new running crew, I didn't care for the ending of the series, and the direction it's taking. I'm not sure if I'd buy the second volume...but then, I'm not sure what's happening with future issues of Marvel's Star Wars comics anyway, as they seem set to do a crossover already, and who knows how that will end up being collected. Hopefully a lot better than Black Vortex was...
Posted by Caleb at 11:09 AM

OK, since you brought it up, the official name of the re-released first Jessica Jones trade is AKA JESSICA JONES TP ALIAS VOL. 1 VOL 01 ALIAS. No colons in the Previews listing 'cause it's all spreadsheets. But. Still.