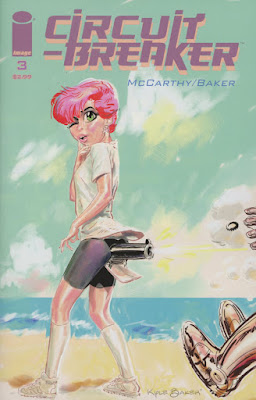 Circuit-Breaker #3 (Image Comics) The latest issue of Kevin McCarthy and Kyle Baker's ultra-dense dissertation on Japanese pop culture in the form of a pastiche adventure comic has so much going on that my brain can barely catalog all the references.

The first eight pages–just eight pages!–features a flashback to the war between the U.S. and Japan 50 years ago, and that war was fought primarily between the American superheroes (whose catchphrases their leader Commodore 64 steals without remorse) and the robot heroes of Japan, the climax a battle between the Gigantor analogue (I think) and the Americans' Godzilla-like kaiju, which a character calls out as such: "This is psychological warfare! They think they can walk all over us with their goofy 'Godzill?'").

After those eight pages, the storyline resumes, the pace of the craziness doesn't let-up at all.

The action climax involves a transforming truck robot that is only something of an allusion to the Transformers and the revelation of our heroine's real nature to her enemies in the robot terrorist cell.

Two random thoughts: 1) I need to set this issue aside for the next time my Japanese friend visits, so she can translate the sound effects and names that appear in some panels and 2) When Marvel next tries to relaunch the Fantastic Four, they should give Kyle Baker a crack at them–he does a great Thing, from what little we see of Aunt Petunia's favorite nephew in this issue. 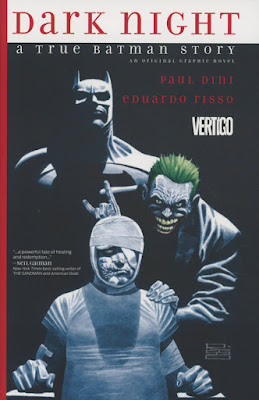 Dark Night: A True Batman Story (DC Comics) I actually haven't read a page of this yet. In fact, I haven't even torn the cellophane off. So I'm just listing it here because I bought it at the shop today. This is Paul Dini's graphic novel-format memoir about surviving and recovering from a brutal physical attack in the 1990s, when he was working on Batman: The Animated Series. It's drawn by Eduardo Risso, one of the greatest Batman artists around these days who hasn't really gotten to draw Batman as much as one might hope he would. I'm both really excited to read this, and a little anxious, given the subject matter. 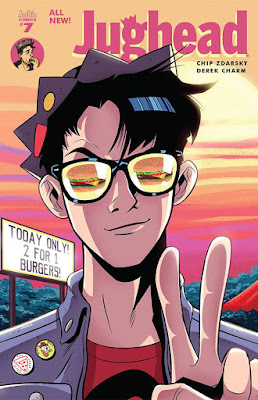 Jughead #7 (Archie Comics) I feel weird saying this, as I thought Erica Henderson's artwork on the first six-issues of the Chip Zdarsky-written Jughead was perfect, but I think I might prefer the work of Derek Charm. Granted, Henderson's version of Jughead's nose was better, as she managed to retain it's unrealistic cartooniness while fusing it to her own personal, not-at-all-indebted-to-the-old-Archie Comics-house style style, but Charm's character designs are a nice fusion of "new" art with the flat, gag comic look of Archie Comics.

Not that one needs to rate Charm and Henderson against one another or anything. I just point this out because I was a little worried about the change in artists, and it turned out that I liked this new guy who isn't Erica Henderson a whole lot.

Chip Zdarsky's plot for this new arc isn't as crazy as that of the previous arc (at least, not yet), but it includes lots of jokes, some of which are wonderfully surreal (like the Mantle family reunion). What I found most surprising, however, is the way in which there's some actual character conflict and drama in this issue, as Jughead loses his temper with Archie, who perpetually values girls over him.

It's a weird thing to realize, but guys, Archie Comics are really, really great right now, and I look forward to reading them in a 100% non-ironic way. In fact, this was the first comic I read this week (I don't know about you, but I generally stack up all my new comics in the order of which I am most excited to read them, with any trades going at the bottom. This week it was Jughead, Circuit-Breaker, Swamp Thing, Lumberjanes and SpongeBob). 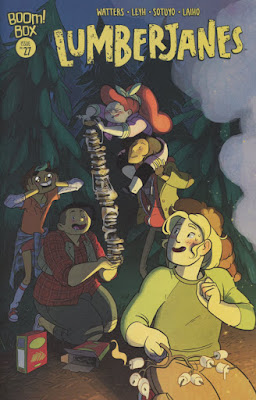 Lumberjanes #27 (Boom Studios) Well, what do we have here? It's another Lumberjanes story arc that seems to be going on way too long for what relatively little story there is. It hasn't dragged yet or anything, but just knowing that this is the third issue in what will be a four-to-six-issue arc has given me something of a sinking feeling.

Jen, Roanoke Cabin, Scouting Lad Barney and, um, that other 'jane from a different cabin and their magical, super-powered kittens are all reunited with Rosie and The Grand Lodge ladies...and they are now all stuck in the next of the giant, horned monster bird that turns out to be a Roc (rather than a Thunderbird, as I assumed; I guess that makes sense, since despite the North American setting the majority of the monsters the 'janes face are from classical myth).

Their our two opinions on how best to deal with the giant monster bird, one of which is to kill it, and the other of which is to escape without killing it. Barney finds the key through the power of bird-watching, and the new girl comes up with a plan, the realization of which makes for an actually rather dramatic cliffhanger, as she figures it out but doesn't spill, leaving a reader (or at least this reader) to puzzle over it in their (or my) head, but not getting any satisfaction. Next issue, I guess. 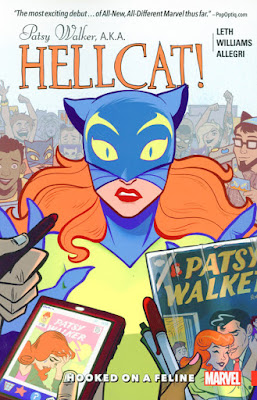 Patsy Walker, AKA Hellcat Vol. 1: Hooked on a Feline (Marvel Entertainment) I haven't read all of this first trade paperback collection of Kate Leth and Brittney Williams' new Hellcat comic yet–that's what I'm going to do as soon as I hit the "publish" button after finishing this post–but I've read the first two issues as they were serially published, and they were excellent. While I've read many more issues of the other two series, based on what I know so far, I would hold this up next to Chip Zdarsky and Joe Quinones' Howard The Duck and Ryan North and Erica Henderson's Unbeatable Squirrel Girl as one of Marvel's very best comic books, a perfect example of how genuinely fun and funny the Marvel Universe and its characters can be when they are allowed to be. 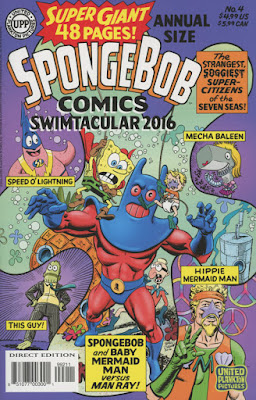 SpongeBob Comics Annual-Size Swimtacular #4 (United Plankton Pictures) For the fourth SpongeBob summer annual, the comic is once again devoted to superheroes, which means a whole lot of pages featuring Aquaman parody Mermaid Man. This particular installment includes some work from some honest-go-goodness, what-are-these-guys-doing-here? superhero comics creators, including Jerry Ordway (who drew the cover), Jon Bogdanove (who drew the table of contents) and Neal Adams, who pencils and inks a Derek Drymon written and laid out story that parodies the Adams illustrated, "relevant" Green Arrow/Green Lantern stories of the late 1960s. In this version, Green Arrow stand-in The Green Harpoon convinces Mermaid Man and Barnacle Boy to quit saving the city from supervillains and instead devote themselves to "the boring problems of the common citizen!"

Seeing Adams' version of Mermaid Man, who has the too-big muscles, neck and chin of a superhero parody, sharing the panel with what look like pretty straight versions of typical Adams characters run through a SpongeBob filter, is pretty great fun.

The other stand-outs in this over-sized, 48-page comic are the Drymon-written, Robb Bihun-drawn "SongeBob BabysitterPants," drawn in a rather realistically rendered, ink-heavy style, and Scott Roberts "Speed O 'Lightning," an entire, 10-page story written to the tune of the Underdog theme song. You should probably read that one out loud for the full effect. 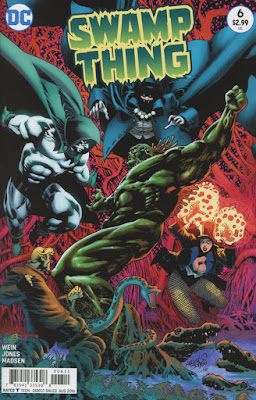 Swamp Thing #6 (DC) The final issue of Len Wein and Kelley Jones' Swamp Thing miniseries ends with a bit of a whimper, as T.S. Eliot predicted (and Wein points out himself in his narration). That's mostly because this is the last issue though, and there's really only one way the conflict can end. Matt Cable has cured Alec Holland from the curse of being Swamp Thing, and he's done so by becoming Swamp Thing in Holland's stead...and then promptly using his newfound, god-like powers to threaten to conquer the world. SHIELD ARGUS has nukes pointed at Houma, Louisiana, where the conflict is set, and it can therefore end in one of three ways. First, Cable can take over the world. Second, ARGUS can wipe Holland, Cable and a portion of Louisiana off the map. Or, third, Holland can take the Swamp Thing powers back from Cable and everything can go back to where it was at the start of the series.

Guess which of those three options Wein goes with?

Of some surprise, if only because it is such a contrast to what we've seen before, a few classic Swamp Thing characters make appearances, and there are guest-stars galore. Not only do Steve Trevor Agent of ARGUS, The Phantom Stranger, The Spectre and Zatanna all reappear, but so too does Etrigan, The Demon.

It's great fun to see Jones' versions of all of these characters. I particularly liked his Zatanna, which is just so...different than the way everyone else draws her, and some of the expressions his Spectre makes. I wasn't very enamored of his Demon (I didn't care for his Etrigan when it appeared in his run on Batman either), but it's still interesting to see Jones' bizarre style applied to different characters just to see how he interprets them. Like, I'd be excited if Santa Claus showed up in a Kelley Jones comic, just to see how Jones would draw that jolly old elf (Hey, that's not a bad idea! Mr. Wein! Can your next miniseries with Kelley Jones involve Santa Claus? Maybe he can team up with Batman to fight Calendar Man and The Krampus or something...)

I suppose one could read something into the last panels in which Swamp Thing is overly emphatic about the fact that he knows exactly who he is, that he is Alec Holland and definitely not a sentient plant with Holland's memories, as some kind of meta-response to what Alan Moore did with Wein's character during the classic run which is the main reason anyone knows/cares about Swamp Thing at all (especially given DC's apparent decision to base their latest relaunch on calling out Watchmen as some kind of wound on the DC Universe), but I've become somewhat inured to DC comics writing criticism or conversation with Moore's work for the publisher a generation ago...to the point where I can sometimes spot it, but rarely care enough to think about it.

As with the previous issues, I cam for the Kelley Jones art, and everything else about the comic was just some sort of Kelley Jones delivery system.


Okay, that's it for tonight. I'll probably write at greater length about Dark Knight and Patsy Walker later, and do come back this weekend for reviews of this week's DC "Rebirth" books, of which there were many.
Posted by Caleb at 8:59 PM