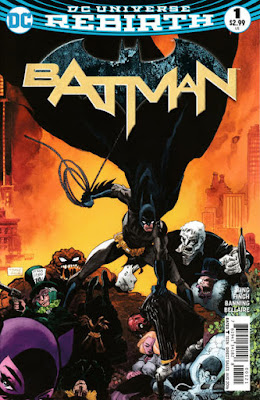 This was one of the variant covers for June 16's Batman #1, by artist Tim Sale. While Sale has never had a regular run as an interior artist on any Batman ongoing series, he has done so many limited series and one-shots featuring the character that, at this point, he's got a gigantic body of Batman work built up. It's a body of work that I imagine eclipses that of many artists who have had regular runs on various Batman ongoing series, in terms of the volume of pages.

I was a little surprised to see him contributing a variant to the new, "Rebirth" era Batman at all, and more surprised still by its content. Sale doesn't draw the current, "Rebirth" Batman, but his own, "Year One" era Batman from his many collaborations with writer Jeph Loeb (Long Halloween, Dark Victory, the Legends of The Dark Knight Halloween specials, etc). Even Neal Adams, an even more classic Batman artist, decided to draw the Rebirth-ed Batman on his variant. 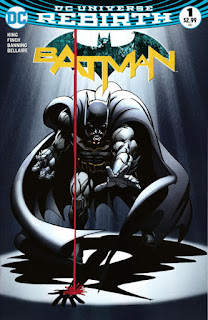 The villains sharing the cover with Sale's Batman are similarly the particular versions from Sale's "Year One" Batman adventures, none of whom look much at all like the New 52 versions and a few of which don't look much at all like the versions other artists draw from any period  (Poison Ivy and The Penguin in particular). Of note is the inclusion of Clayface, who hasn't previously appeared in any of Sale's Batman comics (at least, not this version; I'm pretty sure that Clayface III was in his Showcase story with writer Alan Grant), and whose design Sale seems to have based on that from Batman: The Animated Series (which, in fact, is also the basis for The New 52 version).

The presence of the blond lady baffled me for a while, but I'm like 80% sure she's supposed to be Gotham City District Attorney Janice Porter from Dark Victory, which is a really, really weird choice, considering the villains from the series Sale didn't include, like The Joker, The Riddler, Calendar Man, Carmine Falcone or any of the mob guys. Or a major Batman villain he hasn't drawn before, like, I don't know, Man-Bat or Ra's al Ghul or Harley Quinn or Bane or Killer Croc.

Anyway, it's an interesting piece I enjoyed staring at and picking apart. And much better than the regular cover by the regular artist: 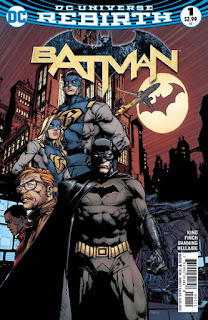 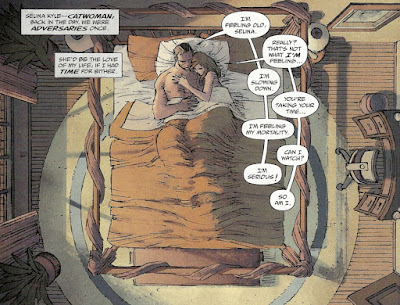 Did any of you read The Dark Knight Returns: The Last Crusade? That was the recent prestige format one-shot in which Batman teams up with Sean Connery to find the Holy Grail before the Nazis can. No, it's the latest of DC release that makes me wonder what on Earth Brian Azzarello is doing with his life (If I had to guess, it would be working on Maus fan-fiction, just to complete the trifecta).

This is his prequel to The Dark Knight Returns, which he is currently writing the second sequel too, as drawn by John Romita Jr. and Peter Steigerwald and featuring vague, nebulous contributions from Frank Miller (He shares a "story by" credit with Azzarello, although "Based on The Dark Knight Returns by Frank Miller" is the first credit; no one is credited with the script). It is a 57-page answer to a question nobody needed an answer to, which is "What exactly happened to the Robin that the old, mustachioed Batman was narrating about at the opening of Dark Knight Returns like 30 years ago?" The answer, of course, was "The Joker killed him," but then, everyone already knew all that.

This is essentially a retelling then; "A Death In The Family" without all the globe-trotting, international intrigue, adventure, super-scary death scene or heroic sacrifice. It's just an older Batman with graying temples and Robin Jason Todd fighting crime in Gotham City together, until The Joker kills Todd. Sort of. Todd is on the escaped Joker's trail when some guys who apparently work with or for The Joker beat him with pipes until red coloring effects fill the bottom of the panels, and The Joker says "Oh, the fun we're going to have little boy... The fun."

If it's a worthwhile read at all, it's mostly because it's still kind of fresh and new and exciting to see JRJR draw DC characters, and here he gets to draw classic (or, if you prefer, the real) version of Batman and Robin, rather than the New 52 versions JRJR's been stuck with since leaving Marvel to play with DC's iconic super-characters for a few years.

It served as a pretty good reminder that there was nothing really wrong with the original Robin costume that Jason Todd wore; it's not like it couldn't look cool when drawn really well, and JRJR draws it really well and puts it and the guy wearing it in some very dramatic scenes, that red, yellow and green popping in contrast to the blues, blacks, grays and browns of Batman and everything else around Robin.

I know that a lot of people–myself included–have wondered about how much of this new suite of Dark Knight Returns material is really Miller and how much of it is Azzarello, and to what degree Azzarello is simply trying to do a pastiche of Miller. It was with some amusement that I noticed a line that either demonstrates Miller's involvement or that Azzarello was really asking himself "What Would Frank Miller Write?" during this process.

The above panel is from a scene in which Bruce Wayne visits former Catwoman Selina Kyle, whom his narration tells us he visits whenever he's feeling unsure of himself.

Check out the last two panels at the end of the scene, though: 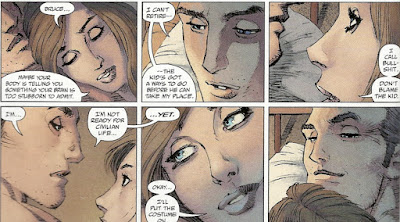 Superheroes having sex in their costumes for kicks! You don't get a whole lot more Frank Miller than that. 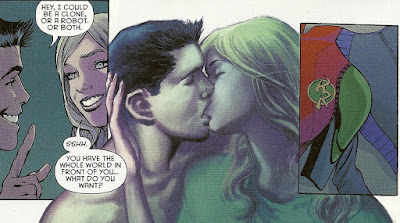 The above panels are the last few in a downright shocking scene in Detective Comics #935, the second issue of the relaunched series, which is numbered #935 instead of #2 because...reasons.

What was so shocking about that scene? It's 13 panels spread across two pages. Red Robin Tim Drake is in Spoiler Stephanie Brown's apartment, taking off his costume in front of her like it's NBD. They're talking about Tim's college plans, when Batgirl Black Bat Orphan Cassandra Cain enters the window holding a plastic bag and wearing an expression of surprise.

"Hey Cass...do you think I could have the place to myself tonight?" Spoiler says. "I need to give my boyfriend a lot of crap for not being honest with people."

That's right, Tim and Stepahnie are dating. They are going steady. They are actually in a relationship.

When did this happen? Off-panel, apparently.

Stephanie Brown was only rather recently introduced into the current, post-Flashpoint continuity during the year-long weekly series Batman Eternal, and she did not meet Red Robin until one of the epilogues of the very last issue. Stephanie walks into her roommate Harper Row's bedroom to see Harper talking with Red Robin. Harper introduces them, and they shake hands...and stare silently at one another for an entire panel before Harper coughs to wake them back up from their apparent reverie, and Red Robin makes a lame, awkward excuse about needing to leave. "Um...Okay. I should go,: he says, rubbing the back of his head "Probably some kind of um...mischief going on."

And as far as I can remember, that's pretty much, like, the extent of their relationship up until this point. Stephanie is in the earliest issues of the sequel series, Batman & Robin Eternal, and shares a scene with Tim. In Batman & Robin Eteranl #2, Red Robin climbs in the window of the apartment Stephanie shares with Harper and Cullen Row and finds Dick Grayson and Stephanie, in her Spoiler costume, standing over a badly injured Harper.

How did he know to show up? He says he bugged the house with cameras and censors, which infuriates Spoiler. "I'm just monitoring for trouble," he says. "I mean, have you met yourselves?" They spend a little more time together with other Batman allies at the Rows' apartment and then in the Batcave, before Stephanie and Cullen get stashed in a safe house while everyone goes off to have an adventure that lasts most of the series (Steph and Cullen both reappear at the end).

And that's about it in terms of Tim Drake/Stephanie Brown interactions.

It therefore feels like a bit of a cheat that writer James Tynion, who is writing Detective and co-wrote the two Eternal limited series, just jumped ahead and we missed all of their flirting, Red Robin's revelation of his secret identity, whether or not it was awkward for Harper and all the humor and drama one would expect in a relationship. I mean, I feel cheated. I liked the idea of Bluebird and Spoiler as roommates, and of a possible love triangle between them and Red Robin. I liked the gradual way Tim and Stephanie's relationship played out in the pre-Flashpoint DCU (under writer Chuck Dixon, who co-created Stephanie and wrote both characters almost exclusively during the various incarnations of their relationship to one another).

I wanted to see Tim and Steph date dammit, not just move from meet-cute to one panel of bickering to suddenly being an item and banging in Steph's new apartment (She no longer lives with the Rows, as she says Batman set both her and Cassandra up with their own places, although Cassandra apparently chooses to instead crash at Harper's or Stephanie's).

I can only assume that Tim and Stephanie are going to break up pretty soon, as otherwise there doesn't seem to be much point of suddenly introducing them as a couple, and that Tynion will focus on that drama rather than the drama of their coming together.

Anyway, note their costumes touching each other on the floor of Stephanie's apartment in that last panel. Symbolism!
Posted by Caleb at 8:38 AM