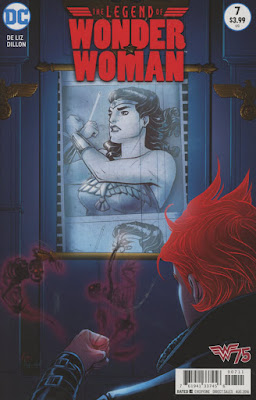 The Legend of Wonder Woman #7 (DC Comics) This is the issue before the issue before the last issue of the series, and writer/artist Renae De Liz packs in some rather unexpected surprises. As of last issue, Wonder Woman's origin seemed complete: She had gotten her name, her costume, her powers and she had began fighting alongside the allies against the Nazis and their supernatural ally with a connection to her mother, The Duke of Deception.

Here De Liz presents us with a scene of the status quo, before tearing it down, in what appears to be the third act reversal of features setting up the climax. Diana learns more about the Duke of Deception and the Greek gods' plans for her and the world, and must make a choice as to whether she wants to be Zeus' champion or not. Given what that entails, she chooses "not," and loses the divine enchantments on the magical items that powered her exploits.

Is this the end of the Legend of Wonder Woman?

No, of course not. There are still two more issues to go. It is a satisfyingly unexpected turn in the story, though, and a dramatic bit of stakes raising. With the Finchs finally off Wonder Woman and replaced by more competent creators, Legend is finally getting some competition for the title of The Best Wonder Woman Comics on the Stands." It doesn't seem to be in any danger of losing that title, though. 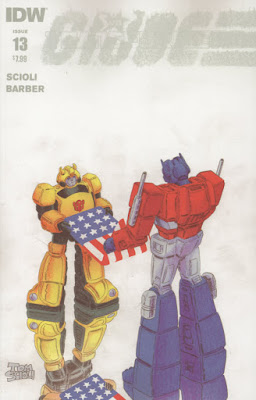 Transformers Vs. G.I. Joe #13 (IDW Production) Well I suppose it had to happen eventually, huh? This is the very last issue of Tom Scioli and John Barber's Transformers Vs. G.I. Joe series, notable for the leeway that IDW and Hasbro apparently gave Scioli, making this one of the most outrageously personal, creator-driven and distinct comics featuring corporate-owned characters of any kind–let alone two toy franchises essentially on loan to a comics company–ever created. I would love it if this series sparked a new, widespread trend of auteur licensed comics, but it's hard to imagine anyone but Scioli pulling something like this off (On the other hand, I never would have imagined a series like this could exist before they started publishing it, so who knows?).

In retrospect, we're lucky we got as many pages of this series as we did, as I assumed when it was first announced that it would only be a miniseries, as that's how all of the many Transformers/G.I. Joe crossovers of the past have been structured (And there have been a lot of them, from Marvel, Devil's Due and IDW; enough to fill three hefty trade collections). Instead, we got 14 issues spread out over two years, and this last issue is a couple books worth of comics: It weighs in at 43 story pages starting on the inside front cover, is completely ad-free and even bears a spine, making the $7.99 book akin to DC's old "prestige format" releases.

I honestly can't overstate how incredibly good this series has been. Certainly it helps that I grew up with the two early '80s iterations of the franchises, and have checked in with them off and on since. I have an enormous amount of affection for both, and just seeing, say, a drawing of Shipwreck or Lady Jaye is usually enough to get me excited. But while so many comics featuring these characters (flip through those IDW collections of previous crossovers I just mentioned, I dare you!) are incredibly disappointing, this one has always wildly exceeded my expectations, or even the most fevered imaginings I've had as a kid.

Scioli consistently mined the incredibly deep depths of the two franchises, each of which occupied a vast, if often rebooted, shared universe, for the most minor of characters and details, drew connections and then did something completely unexpected with them, alluding to pop culture and high culture with elaborate, unexpected references that transformed them. In every single issue of the series, which began with a 2014 Free Comic Book Day #0 issue, I would repeatedly see something that I never expected to see in a comic book of this nature, or a comic book at all, or anywhere at all, really. That level of invention and innovation is difficult to pull off; hell, I would have said it was impossible, had I not spend the last two years seeing Scioli and Barber do it.

That so many of those surprises are of the sort that could only be accomplished in the comic book medium only increased my esteem for the book. I'm sure I've mentioned this ad nauseum before, but it's my belief that the sign of a really great comic book story is one that does something that can only be done in comics. Which isn't to say other comics can't be great, but if you have two otherwise equally great comics, one of which tells a story that could just as easily be told in prose or film and another that takes full advantage of the comics medium, well, the latter is always better (or "better"), at least in my view. Transformers Vs. G.I. Joe did that like six times an issue.

So here we are, a 30-page climactic battle including just about every combatant we've seen so far for the fate of the solar system, which Megatron has on the ropes, having previously destroyed Earth and is about half-way through with the sun itself. There are about ten deaths, including one of the Joes and plenty of the name Cobra characters. Destro is unmasked. Metatextual jokes are made. Pages from the original, Marvel-published G.I. Joe: A Real American Hero and Transformers comics are sampled for effect and, for one funeral scene, re-used in its entirety. There are amazing sword fights told in tiny sequential panels. There are delirious shifts in point-of-view as Scioli plays up the differences in scale between Joes and Transformers. An important plot point revolves around the fact that Hasbro used the mold for one character in the creation of a new toy featuring a new character. There are eight pages of epilogues, all of them amazing: Covergirl and Brawn are getting married...and expecting a child! Optimus Prime leads a joint exploration out of the solar system, with a logo reading "Transformers (Heart) G.I. Joe: Generation 2." Megatron journeys to a different dimension, for a one-panel crossover with the least likely Hasbro toy franchise to join these two in crossover imaginable (And yet, it's somehow perfectly reflective of childhood play, where everyone's toys get mixed together).

And then there's a one-page map of the post-war solar system, which has been transformed by this conflict and the mish-mash of technology and culture. It is an elaborate and, in the annals of G.I. Joe and/or Transformers, unique, new shared universe, featuring enough world-building to support the sort of relentless exploration of the DC, Marvel or Star Wars shared universe mining, although it's just something Scioli has whipped up for fun here (despite an editorial box earlier on saying "As seen in Shipwreck: Space Pirate on sale July 2025!", there's no current plans for more work in this setting).

And I know it sounds like I've been describing those pages forever now, but I've barely scratched the surface, and certainly didn't spoil what occurs on page 29, which is perhaps the reason why this series has to end. How does Scioli, how does anyone top that? It is the most surprising, most awesome thing in a series jam-packed with surprising, awesome things, and, perfectly, it's the sort of thing that seems so completely obvious in retrospect, you can't believe you didn't see it coming; hell, if you're of a certain age and had a certain affection for a certain toy line, chances are you've imagined it yourself decades ago and forgotten all about it.

Farewell Transformers Vs. G.I. Joe, the greatest fucking comic book series of all time.
Posted by Caleb at 8:29 AM

TvG has been nothing but incredible from start to finish. And as someone who was brought to comics by Hama's G.I. Joe, the callbacks and payoffs were particularly sweet. I found myself laughing out loud at the sheer audacity of Scioli's images and ideas. Speaking in generalities to avoid spoiling the finale, there are moments in issue 13 - the General Flagg identity reveal, a double page splash that concludes the Earth/Cybertron conflict decisively (nice use of Italy!), Megatron's final fate, the bonkers epilogue(s) - where I couldn't turn the page, I just had to marvel at what had to be done. I hope Larry Hama is reading this and appreciates it (though I just just as easily see a curmudgeonly, but affectionate dismissal).