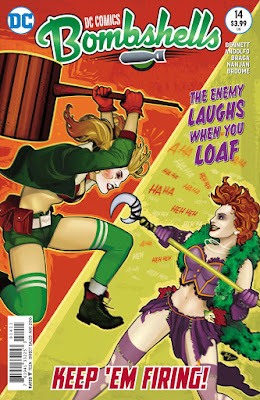 DC Comics Bombshells #14 (DC Comics) After last week's check-in with the Batgirls on the homefront (Last week? Jeez, slow down guys! I thought this was a monthly?), writer Marguerite Bennett and artists Laura Braga and Mirka Andolfo head back to the European theater for "Love Stories." The powerless and injured Mera is plucked from the ocean off the coast of Ireland by handsome blonde lighthouse keeper Arthur Curry (their first panel together showing them in a romance cover pose), a flashback to the 1936 Olympics shows how Zatanna came to be in The Joker's Daughter's thrall and what eventually becomes of Zatanna and John Constantine (also, Bombshell Raven gets a a three-panel introduction) and, finally, Harley and Ivy confront The Joker's Daughter (and Harley introduces Ivy and the readers to the Bombshell version of The Joker in a flashback). It's...a lot for one issue, and the issues seem to be coming out a little too fast at the moment, but it's still all mostly enjoyable, and better-drawn than the bulk of DC's multiple-artists, sprawling-casts digital-first series. Of the three couples in this particular issue, the only one that actually locks lips is Harley and Ivy. The subtext of Batman: The Animated Series is now text, here and in the DC Universe proper, and it's well-worth noting that DC Comics Bombshells is probably the most LGBT-filled mainstream superhero comic of all time–or, at least, the most L-filled. Perhaps ironically, it's set in 1941, not 2016. 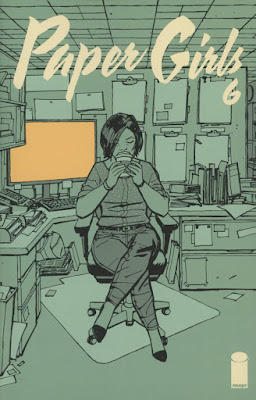 Paper Girls #6 (Image Comics) Speaking of 2016, that's the year in which this issue of Brian K. Vaughan and Cliff Chiang's weird timetravellers-invade-Cleveland story jumps ahead a few decades to this year–"We got backed to the fucking future," one of them explains–where protagonist Erin Tieng and the other girls meet future Erin Tieng. It's pretty awesome. I still find the plot a lot more opaque than I would like, although I appreciate the way Vaughan is so gradually revealing parts of it for the sake of suspense, but the art is superb and the moment-to-moment interactions between the characters and the weirdness they are confronted with is fun. 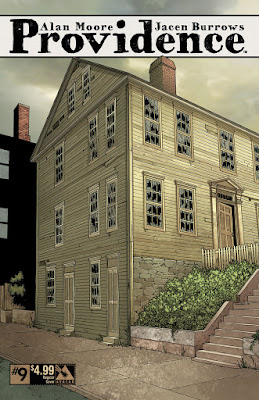 Providence #9 (Avatar Press) In this issue of Alan Moore and Jacen Burrows' exploration of their imagined H.P. Lovecraft shared universe, our protagonist arrives in the titular town and meets with a different version of the scientist in Lovecraft's "From Beyond," who here uses special glasses in order to see the bizarre creatures whose reality overlays our own. They mostly look like the creatures you would find on the light-less ocean floor. Our hero then proceeds to have anal sex in a secret room in a Catholic church containing a meteorite that probably isn't going to lead to anything good, and then spends the rest of the issue with Lovecraft himself, who Moore writes as a delightfully quirky character.

As usual, there are a million pages of fake hand-written journal entries that I did not read. 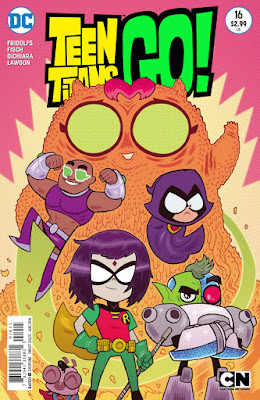 Teen Titans Go! #16 (DC) I actually bought this for my nephew, who is a huge fan of the show, but naturally I read it first. I had an ulterior motive for buying it for my nephew as well; he's only three-and-a-half-years old and can't read, which means he makes my sister read these too him, and I enjoy knowing she has to read these things over and over to him and try her best to imitate all the voices while doing so.

The art is pretty disappointing, as it usually is. I think that stems from having a fantastic Dan Hipp cover, and than have people who are not Dan Hipp do the interiors. It just raises expectations in order for a good dashing.

That awesome cover refers to the first of the two stories in this issue, in which Mumbo Jumbo scrambles the Titans' powers (Starfire is given Beast Boy's powers, but she only turns into weird Tamaranian animals with names like glorg and Zornian muck beetle. There are a lot of neat little gags in this story, written and drawn by Derek Fridolfs. The art grew on me the second time through. The designs fit those of the show, but the rendering doesn't quite...still, there's a very flat, charmingly amateur-ish look to it. It looks like fan art, which is probably a good look for art in a based-on-a-cartoon show like this to have.

The second story, written by Sholly Fisch and drawn by Marcelo DiChiara, has the Titans wild in the Batcave and messing with Batman's stuff again. This time, they take the Batmobile for a road trip. The best gag was, I thought, a simple detail in a single panel–Gordon carrying his Batman helmet from the recent "Superheavy" arc in Batman in his hands when he and Batman return to the cave and react to the Titans' antics as they always do.

Although I did laugh at Starfire's changing "Talk to the hand, girlfriend," into "Speak to the hand, friend of the girls"...
Posted by Caleb at 8:59 PM