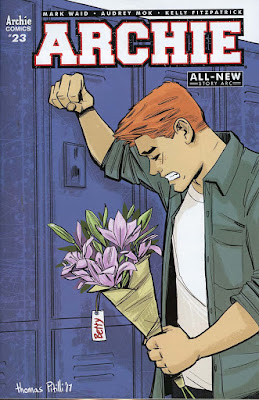 Archie #23 (Archie Comics) This issue is technically the start of a new story arc, but it continues to explore the fallout from the previous arc, as Betty Cooper and friends deal with the extent of her injuries, which may result in her being bound to a wheelchair for the rest of her life (but I'm going to guess probably won't). Writer Mark Waid does find some room for jokes, as Betty's friends try to help her out by taking over all of her various volunteering and charity work for her, and each of them try to pass Archie off on one another as his legendary clumsiness makes a mess of everything, but for the most part this issue continues the level of drama of the previous arc. In retrospect, I really wish Waid would have invested another issue or so in setting up the rationale for the drag race; at the time, it seemed to be a little out of left field, and if the consequences are going to be this dire and have a semi-permanent-ish effect on the series, it would have been nice if they were a little more organic.

Perhaps to help distinguish this as the start of a new arc, Waid is joined by a new artist (or, as the back cover says, "NEW SERIES ARTIST") Audrey Mok, which is something of a blow to Josie and The Pussycats, which Mok was drawing before she got switched to Archie. 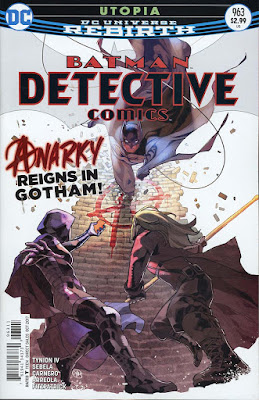 Detective Comics #963 (DC Comics) Co-writer Christopher Sebela joins James Tynion for "Utopia," a sort of in-between arcs story drawn by Carmen Carnero. Here we check in with what Spoiler Stephanie Brown has been up to since she fled Batman and Batwoman's Justice League of Gotham City at the end of "The Victim Syndicate," and zoom in on the Clayface sub-plot, the thing about how his clay brain makes him a bad guy, regardless of what he might want to be.

Steph has been working with Anarky, who Wikipedia tells me is actually the second Anarky in post-Flashpoint/New 52 continuity. This Anarky is apparently Lonnie Manchin though (Steph calls him "Lonnie" at one point), even though he has a new, dumb costume which keeps nothing of the original save the color scheme and the mask. The design is a weird one, given that the character was originally created around a particular costume design (artist Norm Breyfogle and writer Alan Grant wanted to do a character who looked like the one from V For Vendetta) and the A-for-Anarchy symbol has a fairly universal appeal, although this design has excised it from Anarky's costume entirely (instead, he wears a couple of straps that attach to his belt to suggest an "A").

Like most of the '90s characters inserted into this series, this version of Anarky reads like a pale shadow of his original self. It's not just the design; when creator Alan Grant was writing the character, particularly after his initial appearances, I got the sense that both Grant and Lonnie had read books I hadn't, and were talking about societal philosophy. Here Lonnie basically just talks in platitudes, and what he's up to exactly just feels like a sort of generic clash with Batman's worldview (he has apparently set-up an underground refugee camp near "Monstertown," the Gotham neighborhood created in the wake of "Night of the Monster Men").

There's also a flashback to before Tim Drake disappeared, as a way of reminding us that Tim and Stephanie did indeed have a relationship in the current continuity, even if it happened almost entirely off-panel. 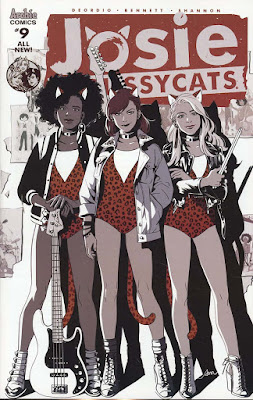 Josie and The Pussycats #9 (Archie) This issue concludes the Pussycats' Tokyo adventure, in which Riverdale's up-and-coming band The Archie was opening for them...until they were kidnapped by an alliance of antagonists from throughout the earlier issues of the series. Mostly a chase scene, this issue resolves the kidnapping when the Pussycats receive aid from an alliance of friendly bands from earlier issues in the series, plus Alexandra's giant robot battle suits.

After the amount of set-up last issue, including the panel-time devoted to The Archies and the Josie/Alexandra/Alan love triangle, this issue felt like it resolved things a little too quickly and too neatly, but the fact that it felt off might have been due to the fact that regular artist Audrey Mok has been replaced by new artist Kelsey Shannon (Mok, as mentioned two reviews ago, has apparently been transferred over to Archie) or that the normal joke-per-page ratio was lower than usual.

There's still a rather sweet ending, particularly the panels of Josie tucking in the publisher's teenage mascot. 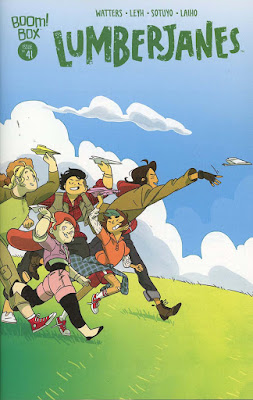 Lumberjanes #41 (Boom Studios) In a relatively rare mega-plot issue, Jo completes her invention to try to figure out what the heck is going on with the movement of time around the camp--41 issues does seem like a lot for a series that covers the span of a single summer, right?--and Molly moves to see what if anything she can do to slow it down even further, to delay her having to return to her maybe abusive mother. There have been hints about Molly's bad home life in the past, and we met her parents last issue and saw things weren't right, but writers Shannon Watters and Kat Leyh just kinda skipped over that for a return to the status quo here. There is something going on with the face seen in the waterfall at the last issue, but, um, I don't know what's going on. Lumberjanes has unusual rhythms for a monthly, serially-published comic. As I've mentioned before, the arc generally go on at least an issue longer than it feels they need to, and this issue seems like it should be the next part of the arc that may or may not have wrapped up last issue, but it could just as easily be the start of the next arc. Or a standalone story. I don't know; maybe it reads more smoothly in trade...?

Ayme Sotuyo is still drawing, and I'm still not crazy about her art.

The bit with the paper airplanes, which is what found itself on the cover, was interesting and educational though. 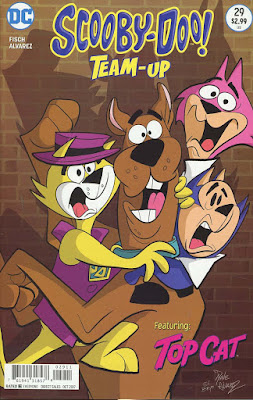 Scooby-Doo Team-Up #29 (DC) I'm not really a fan of Top Cat and company, so this particular team-up didn't excite or interest me in the way that the DC superhero team-ups do. It's set entirely in TC's alley, as a series of different characters employ the legend of Hoagy's Alley to try and scare everyone away for one reason or another. It starts as Top Cat's scam to clear the joint out for an illegal poker game with some visiting cats, and Officer Dibble immediately calls Mystery Inc. in upon the ghost's first appearance. Regular writer Sholly Fisch is joined by artist Dave Alvarez, who has a pretty strong individual style that differentiates his Top Cat characters from those of the TV show, and even adds a dimension of dynamism to the Scooby-Doo characters, which too often in this book are so faithful to the cartoon designs that one wonders if regular artist Dario Brizuela doesn't just plop them into panels from a file folder of poses he's amassed over the years. Look very closely for a surprise Yakky Doodle cameo of sorts.
Posted by Caleb at 1:15 PM