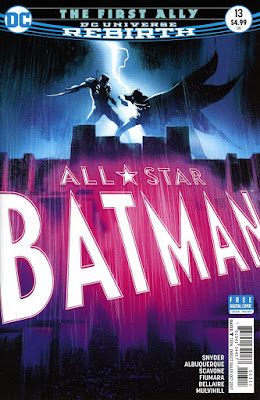 All-Star Batman #13 (DC Comics) It was interesting reading this just a few hours after I read The Beat's regular column on DC's month-to-month sales, as writer David Carter noted the dramatic difference between the sales estimates for July's issues of Batman (107,071 and 102,335) and July's issue of All-Star Batman (60,569), and quite reasonably noted that "Despite the involvement of Snyder, readers seem to have been treating this as a secondary Batman title."

It would certainly seem that readers--or at least the shops ordering things for their readers--are treating it that way. I suppose that's natural, as Batman and Detective are historically the main Batman books, and over the course of my time reading comics, probably in that exact order. That would make All-Star the tertiary title, and I think DC did a few other things to signal that it was an "unimportant" Batman book, including re-purposing the title of an out-of-continuity book from a special, out-of-continuity mini-line, featuring rotating artists, a higher price-point and back-up stories. The market was certainly trained to consider All-Star a less essential Batman comic, but a difference of some 40,000 units still seems kind of striking, doesn't it?

The weird thing is that much of Scott Snyder's All-Star seems to be much more relevant to a Batman-centric, DC Universe mega-plot--the "Dark Nights: Metal" stuff--than anything in Batman proper. At least before the "The First Ally" arc, the earlier issues were pretty much the only place to see much of Duke Thomas, and he starred in a pair of back-up story arcs. He certainly seems to play a significant role in Metal, and some relatively minor characters from the second arc, "Ends of The Earth," also showed up in Metal. Meanwhile, Batman is currently devoted to a "Year Two" flashback arc. Even Detective seems to be more relevant/important to wider DCU goings-on these days, given that there seems to be a degree of Metal tie-in to it, plus the series has continually referenced the post-DC Universe: Rebirth goings-on involving Mr. Oz and so on.

Anyway, that got me wondering how significant the pricing of Al-Star Batman is. It costs $4.99, as opposed to the $2.99 issues of Batman. I wonder if they excised the back-ups and used different cover stock, would All-Star be selling as much, or more comparably to Batman...? With All-Star about to be canceled, I guess we'll never know, and there probably isn't a good way for DC to experiment to find out if it's price is what kept it so far below Batman (and the Snyder-written Batman these last few months. Maybe it doesn't matter though, since the higher price tag on All-Star means DC and retailers don't need to sell as many issues to make as much money.

These are the things I was thinking about shortly after I put down All-Star Batman #13, which continues the "First Ally" arc...and I believe is the second-to-last issue of the arc and the series. Heavily devoted to the flashback sequences involving Alfred's training to be an English black-ops superhero type, with Batman, "The Black and Whites" and Briar and his Dark Knight all after "The Genesis Engine" which does...something important. There is a lot of talk of fathers and sons, which retroactively makes putting Tommy Elliott/Hush at the beginning of the arc seem an inspired move.

The back-up, written by Rafaels Albuquerque and Scavone and drawn by Sebastian Fiumara, continues to be well made, but kind of random feeling attached to the lead story, and appearing in this book at all, really. 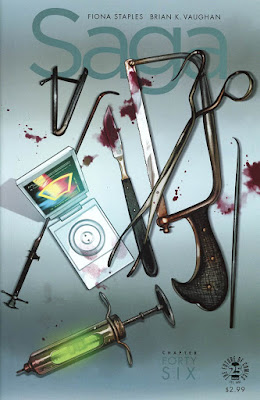 Saga #46 (Image Comics) Wow, Brian K. Vaughan and Fiona Staples sure do know how to tell a story through comics. The entire sequence in the back-alley abortion place is handled just beautifully (although seeing what looked like Dumbo's mom on the next table did kinda freak me out a little). There's also a surprise coupling that occurs on the last page, and while one can see it coming--particularly in the panels immediately proceeding it--it makes for another great example of the Vaughan/Staples team's expert use of splash pages. 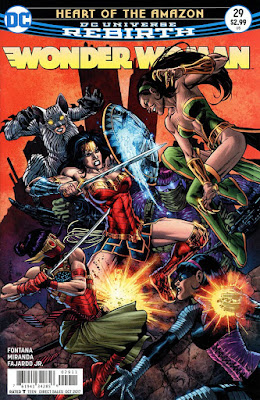 Wonder Woman #29 (DC) The penultimate issue of writer Shea Fontana's fill-in run finds Wonder Woman and Etta Candy fighting some more bounty-hunters. These include Cheshire, Plastique and three characters I am unfamiliar with. There's Cat's Eye, who on the cover looks a bit like Carrie Kelley's Cat Girl (or at least one of her Cat Girl costumes), but inside looks like she's wearing some kind of terrible costume meant to mimic the wrinkly skin of a hairless cat, and also shoots eye-beams. There's Abolith, a new character with noting noteworthy to define him in personality or powers. And there's "Baundo, The Warrior," a teleporter who quotes "The Art of War" in the fight and gets called out for doing so.

Their involvement basically just amounts to a single, multi-page fight scene, and given how awesome it was when Batman had a bounty put on his head and assassins (including Cheshire) came to collect it (in the first All-Star Batman story arc, "My Own Worst Enemy"), well, this really can't help but be disappointing.

The post-fight portion, when Wonder Woman discovers the reason why someone wants her body and decides that its a noble goal, despite the way in which they went about trying to get it, is much stronger, and very, well, Wonder Woman-y.

Inaki Miranda is the artist, and that makes her the third artist in just four issues, which is too many artists. Miranda seems to be drawing Etta closer to her original New 52 shape, albeit with her "Rebirth" haircut. It would probably behoove DC to work up some style sheets on their characters.
Posted by Caleb at 2:18 PM