Is there a science teacher in the house? 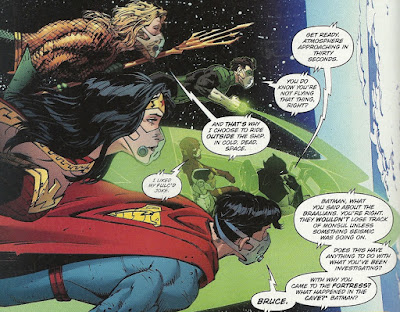 Before I discuss one of this week's weirdest comic books, I'm afraid I just have to get this out of my system first, if you will all indulge me.

So the above image is a single panel of Dark Nights: Metal #1, written by Scott Snyder, penciled by Greg Capullo, inked by Jonathan Glapion and colored by "FCO" Plascencia. In this panel, we see the entire Justice League flying through outer space together. Green Lantern Hal Jordan is wearing a Green Lantern Corps ring, which encases him in a force field and allows him to travel through space. Presumably, it either traps enough oxygen in there with him to allow him to breather, or it generates oxygen. It's a pretty versatile piece of super-alien technology. The three other human members of the League--Batman, The Flash and Cyborg--are similarly allowed to travel through space thanks to the ring. As you can see, they are in a ring-conjured construct in the shape of a spaceship.

The remaining three members--Superman, Wonder Woman and Aquaman--are shown flying alongside of Jordan, outside of the ship. The only thing they have to protect them from the vacuum of space is a little see-through mouth guard like thing; these likely supply them with oxygen, as well as allowing them to speak to one another.

So here's my question: Are Superman, Wonder Woman and Aquaman able to travel through a vacuum like that without dying...? Please correct me if I'm wrong, and I likely am wrong, since all I know about what happens to organisms exposed to space comes from movies, comics and mostly-forgotten comments made by barely-remembered grade school science teachers, but I thought if one was in a vacuum, the lack of oxygen and the extreme cold were only some of the things that could kill you. I thought the vacuum would also suck out all of the air inside of you, and maybe all of the liquids inside of you and maybe the organs inside of you...? It was my understanding that you would basically explode if you were in a vacuum.

Superman seems cool. While I've seen him wearing full space-suits before, I've also seen him wearing a little mask like the one above and I've also seen him flying through space with no protective wear at all. I'm assuming he's simply so strong that his body can withstand the rigors of space travel and hold itself together. The cold wouldn't be cold enough to hurt him, since almost nothing can hurt Superman. And he doesn't really need to breathe oxygen, since his body is powered by solar energy, rather than the chemical processes that keep humans alive. Also, he can fly, so propulsion shouldn't be a problem for him.

Wonder Woman though, that seems like a stretch. Sure, she's plenty strong and has a high degree of stamina and invulnerability, but it's not comparable to Superman. Even if we imagine that her demi-god powers are such that they would allow her body to keep itself functional in one piece in space, and even if we imagine that she's strong enough that the cold of space wouldn't freeze her, she still needs oxygen to breathe. Even if the mouth piece is pumping oxygen into her mouth and nose, wouldn't it just get sucked right back out of her ears and pores and so on...? Like Superman, she too can fly, so there's no problem for her there (Unlike Superman, I'm having trouble thinking of a single instance of Wonder Woman flying through space without the benefit of a ship or a giant kangaroo).

And then there's Aquaman. I know he was massively powered-up by the New 52 reboot, to the point where he is basically as strong as Golden Age Superman, but no matter how tough and how strong they say he is these days, his body can't possibly be strong enough to survive a vacuum, can it? (The excuse for his super-strength and high degree of invulnerability is that Atlanteans basically hyper-evolved to survive in their environment, so that he must be super-strong and nigh-invulnerable to survive and even flourish at depths where the pressure of the ocean would crush just about anything.) Similarly, while he is fairly immune to heat and cold, space is, like, really cold; can Aquaman really withstand the cold of space? Aquaman also needs oxygen to breathe, whether he gets it from the air or from water. Again, the mask might be giving it to him, but how's he keeping it...? Finally, Aquaman can't fly; how is he moving through space...?

Now, all of this is easy enough to no-prize away. I imagine that Green Lantern is actually projecting a field around all of them, despite the fact that we can't see it...the Lantern rings can project and construct light constructs that a comic book reader's eye can't always see. In fact, they have to be all under the influence of the ring to a certain degree, as otherwise they couldn't travel through space in that manner very far (I think it was Geoff Johns who introduced the idea of the Lanterns' rings opening wormholes to allow them to travel through deep space in an efficient manner, but maybe someone had thought of that before). So maybe there's a giant field of oxygen all around all of the heroes, and Capullo and company just didn't render it visible (It's also possible that those face masks create super-thin, sheathe-like space-suits that can't be seen by the human eye, not unlike the ones in Guardians of the Galaxy 2).

So I'm not really arguing with the panel, I just want to know what the vacuum of space does to human beings. And Superman, Wonder Woman and Aquaman.

Thanks in advance for any help you might be able to offer in setting my troubled mind at ease.
Posted by Caleb at 7:34 PM

So there's a pretty well known science class thought experiment that asks how high Superman can suck water up a straw. The answer is about ten meters. Why so low? Superman has unlimited lung strength, but the lowest pressure he can provide is 0 atmospheres or vacuum. The height of the water is determined by the difference between the atmospheric pressure and the pressure in the straw, which is at most 1 atmosphere different. So it doesn't matter how hard Superman can suck he can't get the water any higher than about 10 meters (ignoring momentum of the water and other effects).

This is all a long preamble to say that the pressure difference between space and internal body cavities is about 1 atmosphere. I can see that not being a problem for Aquaman as he is subject to external pressures up to 1000 times atmospheric pressure at the bottom of the sea. So, I can see it being plausible that he can hold his breath against the vacuum of space. Then again, how does Aquaman's water breathing work? Do his lungs fill with water? If so then there's really no pressure differential he has to contend with. That's comic books for you.

As for cold, the real thing they would have to contend with is heat loss. In space there's little to no medium to transfer heat through conductive or convective heat loss, so all heat is lost in the form of radiation. In water, heat is lost through convection, conduction, and radiation. I think therefore that you'd lose heat more slowly in space than in extremely cold water. So, again, Aquaman is probably okay.

As for the masks, as long as there's a good seal, and the material can withstand one atmosphere of pressure pushing out, they'd be fine. How the masks produce oxygen is a mystery though.

For all the same reasons as Aquaman I'd say Superman is fine. He's basically invulnerable. I'm a bit more iffy on Wonder Woman since the extent of her powers and toughness has really varied over the years. But again, though maybe not as tough as Superman, I'd say she's as tough and strong as Aquaman and so would probably survive in space as well.

It's my understanding that one of the more brutal parts of space travel is radiation. Superman and maybe Wonder Woman might be fine, as they are invulnerable and mostly invulnerable but Aquaman is used to getting hit with even less radiation than us land humans. I would think he'd have no such adapted resistance to the radiation.

Awesome, thanks. You helped put my mind at ease.