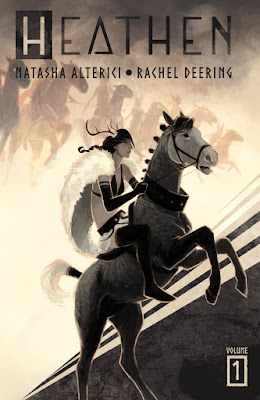 When Heathen begins, we learn two pieces of information. First is the legend of Brynhild, the leader of the Valkyries who defied the will of Odin and, as punishment, was banished from the land of the gods and cursed her to marry a mortal. The next thing we learn is the story of our protagonist Aydis, a young, Viking living out her days in exile for kissing another girl, a transgression normally punished by marriage or death.

I first heard of Heathen from a tweet sent out by the series’ author/artist Natasha Alterici urging people to check out the debut issue of her new lesbian Viking comic. I didn't need to hear anymore to know I would like Heathen, as lesbian Vikings are relevant to my interests. And with the release of volume one (collecting the first four issues) I've been able to confirm that yes, I do like this comic.

Heathen is set in a world where gods, immortal warriors and talking creatures roam the same lands as men and women. Aydis, spared from an execution by her father and no longer under the thumb of the men who rule her village, has taken on a quest of her own. She's determined to break Brynhild’s curse, a dangerous journey across treacherous terrain ending with a leap of faith through a fiery barricade.

The act of bravery impresses Brynhild, who sees a kindred spirit in Aydis, a young woman seeking her own path. Aydis catches the eye of another Valkyrie, Freyja, who whisks her off to a paradise. She offers Aydis a life free from man’s laws and out of the line of Odin’s rage, a  place where she can live and love freely, without judgement or derision. It's a tempting offer, but Aydis refuses.
Aydis wants to help Brynhild fight to make the world better for others, not necessarily for herself. Freyja understands the warrior desire, so parts ways with Aydis, offering instructions that will aid Brynhild.

Brynhild, for her part, has reconnected with the last mortal to "break"  her curse. Odin’s punishment was cruel and eternal; forcing Brynhild to marry a mortal, only to have the curse reset when that mortal dies. Brynhild is sent back again to live her life in painful solitude, doomed to repeat the cycle forever. But Brynhild has had enough, she's ready to shake off the shackles of Odin’s petty revenge for good.

Alterici’s art style pairs well with her narrative. Her vivid dialog fills the space of her sparse backgrounds. Most panels merely have the suggestion of landscapes or buildings, instead focusing on the characters and letting their expressive faces telling the story. Her color palette doesn't stray too far away from black, brown, gray and taupe, and it gives you the impression that you're reading from an aged and fading document. 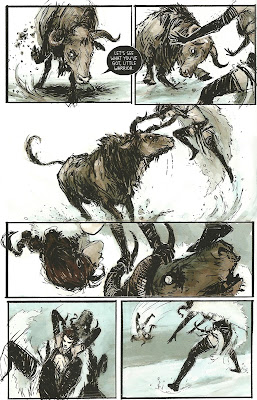 These first four issues definitely had a lot of setup, establishing the characters and their motivations. I'm hoping now that the pieces have been put in place, the next issues will have a little more action. Alterici is definitely capable of conveying dynamic energy in her art. One sequence that stands out involves Aydis fighting a god in the form of a bull, and in another, Brynhild leaps off a galloping horse into a throng of mobbing villagers. I'd like to see a few more battles, maybe someone wielding a large ax of some sort. 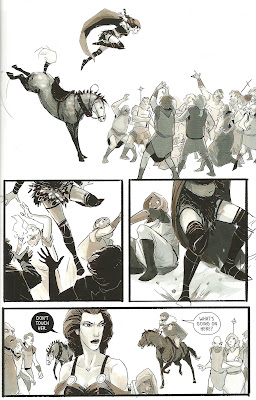 There's a lot to like about the main character, Aydis. She's a fierce, fearless warrior who, even though she was cast out by her own people and has no reason to care about others, has a drive to protect those she can. Alterici has created a steadfast and loving young woman. She refuses to make apologies or excuses for the way she desires to live her life.

Aydis and Brynhild are two women who have had their lives derailed by the oppressive reign of man. With nothing left to lose, I get the sense they will wreak havoc in their quest for freedom. It may not be for themselves, but it will be with the hope that other women won't have to suffer like they have. Needless to say, I'm very much looking forward for what's in store in the next issues.
Posted by Caleb at 7:18 PM