Reviews of some recent and upcoming comics

Last Days of American Crime #1 (Radical Comics) The title of this comic book is meant to be taken somewhat literally as its premise. In the near-ish future, the U.S. government will be readying some sort of signal that will “neurologically make it impossible for anyone within its range to engage knowingly in unlawful activity.”

That seems like a pretty great idea for a crime story, right? The problem is that the government in this series is doing it on the down low, which takes a great deal of the urgency out of that premise, and dulls the hook of the story quite a bit.

Well, that’s a problem. Perhaps the bigger problem with writer Rick Remender’s scripting of the first issue of this three-issue miniseries is that I only know the bit about the secret government crime-stopping signal because I read about it in the press materials for the book, and then again in an interview with Remender that ran in the back of this first issue. Reading the story itself, there’s only a passing reference to that big idea, most of the focus going to another big idea—the fact that the U.S. is about to go to a purely cash-less society will in and of itself make most forms of crime obsolete, but not before it presents a once-in-a-lifetime opportunity for a smart, tech-savvy criminal element to set itself up with an inexhaustible source of electronic wealth.

The two big ideas make almost one another redundant—in this issue at least, only one of them gets any play at all, and, remember, this is a three-issue series, so this is a 90-minute movie, Remender’s already burned through the first half hour.

The focus is on the criminal element hoping to make that one big last score. The plan is that of Graham, a rather unlikable, old-fashioned criminal type (When we first meet him, he’s about to burn a man alive). He’s so old-fashioned, he needs to recruit someone else to do the computer hacking for him, a shifty, hipster-y looking young man named Kevin Cash, and, complicating matters, is a mysterious woman who initiates some anonymous bathroom sex with Graham before later being introduced as Shelby, Kevin’s girlfriend.

You know how the news magazine’s will occasionally run big long story’s about whether America is in decline or not? Well, the milieu of Last Days is an America in which that’s no longer a question—things are bad, Robocop bad, Mexican police using lethal force to keep Americans from jumping the fence to immigrate south bad.

Artist Greg Tocchini does an excellent job of suggesting how bad the world is through his gritty, messy but still quite pretty artwork, mostly with the details in the background. It’s a nice-looking comic book, and the rocky aspects of the premise aside, Remender has written a propulsive, page-turner of a story. With two issues yet to go, there’s certainly time for Last Days to turn itself around, but even if it doesn’t, it’s not a bad bit of crime comic book-ing, and when it comes to straight genre work, “not bad” is often just as good as “good.”

Like the recent Incarnate series from Radical, Last Days is being released in 48-page, $4.99 “prestige” format, with a spine and the ads all stored up and running just in the back, segregated form the story. It’s a heck of a value, and a nice format compromise between the 22-page, stapled serial comic books and the inevitable industry standard of the trade paperback. 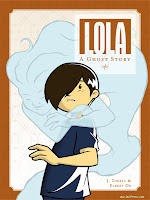 Lola: A Ghost Story (Oni Press) “Lola” is the Tagalog word for grandma, and preteen Jesse’s Lola has just died, prompting him to return to his parents’ home in the Philippine countryside to bury her. His Lola had a special power, a sort of mysterious second sight that allowed her to see ghosts, visions and the occasional supernatural monster. Jesse has inherited the ability, but he’s not terribly happy about it, given that the visions tend not to be a whole heck of a lot of fun and his parents, teachers and classmates don’t really believe him anyway.

Writer J. Torres’ story is a low-key one, set on simmer. Our quite, withdrawn special boy hero goes about the visit, with little to no control over what happens when (as children never do in such occasions), while he learns a bit more about his Lola and legendary aspects of her childhood and abilities and deals with another dead relative, one only he can see but who never the less has a great impact on the rest of the family.

It reads quite a bit like a young adult novel, and probably makes for a pretty solid all-ages read. Torres sometimes seems to try too hard, and I found the open-ended, “I’d love to do a sequel if you guys like this” conclusion rather unsatisfying, but its otherwise a very solid story with enough going on between the supernatural imagery and the family melodrama to offer a little something for almost everyone.

Torres does a pretty great job of getting out of the way and letting Elbert Or’s accomplished art work do the heavy lifting when necessary. Or’s style is soft, round and cartoonish (like, characters only have four fingers cartoonish), all of which contributes to a sense of warmth that keeps the scarier elements of the story from overwhelming the mood. Rather than straight black and white, the book is colored in sepia tones, which no doubt help add to that sense of warmth and highlight the nostalgic aspects inherent in the returning home and coming-of-age elements in the story. (Note: This should be in shops this coming Wednesday, January 13).

The Muppet Show Comic Book #1 (Boom Kids): Boom and Roger Langridge are transitioning their Muppet Show Comic Book from a series of miniseries to an ongoing series, and this is the start of that effort (not counting the recent #0 issue). With the theater undergoing renovations, Kermit decides to take the Muppet Show on the road, and familiar routines get refit for more lo-fi, outdoor performance. For example, Electric Mayhem is now Acoustic Mayhem, Rolf’s medical drama skit is devoted to an old-timey snake oil routine and while the two cranky old hecklers who haunt the balcony aren’t around, there are two equally cranky old locals sitting on a tree branch who look and act an awful lot like ‘em. Meanwhile, Fozzie decides to strike out on his own as a street performer, and in a back-up detailing the ABC’s of this new challenge facing the sad sack stand-up, Langridge again reaches one of those occasional bits of pathos he’s been able to bring to the property. If I did my math right, this is the ninth issue of a Muppet comic scripted and drawn by Langridge, and, like the previous eight, it its amazingly fun and an impressive adaptation of one medium into another that, by all rights, shouldn’t even be possible, let alone this successful. Damn that man is good… (Note: This should be in shops this coming Wednesday, January 13)

Stumptown #2 (Oni) Greg Rucka’s portrayal of his attractive young female protagonist’s flexible sexual identity and outgoing availability is a little on the icky side, isn’t it? Last issue Rucka had his early-thirtysomething Dexedrine flirting with a mob boss’ bikini-clad daughter, seemingly making her the third lipstick lesbian comic book crime-fighter he’s currently writing (Along with Batwoman and The Question II in Detective Comics). This issue opens with her flirting with her male doctor, getting into an argument with a policeman whose marriage she broke up in the past and, upon encountering the mob daughter again, we learn that the daughter isn’t really gay (“Sorry to break your heart, but I don’t play for your team”) and that Dex is probably bi or still experimenting (“I’ve yet to figure out what team I’m on.”)

That’s right boys, she’s even better than a lipstick lesbian! She’s one that might sleep with you!

That rather minor (if distracting, given Rucka’s recent body of work) business aside, Stumptown remains a rather engaging and enjoyable detective comic. Beyond her fantasy aspects, Dex is a charming enough person to spend time around, and Rucka is playing the mystery out like a real mystery novelist rather than a comics writer fooling around with the genre—introducing suspect after suspect and possible motive after possible motive, each equally likely.

I continue to enjoy Southworth’s work, even if the heavily-referenced style isn’t one I’m personally particularly fond of (I really dislike the way his cars look, but otherwise he does a pretty great job of making each panel, regardless of the amount of reference, his own). There’s some back matter in this particular issue in which the artist discusses his work which turns out to be a lot more interesting than such back matter usually is. I usually pick up a comic for the comic, not what’s in the back about the comic, but I do like reading about how artists go about meeting little challenges like, say, how to people and cars relate to one another in terms of size.

I also have reviews of Jim Rugg and Brian Maruca's Afrodisiac and Josh Cotter's Driven By Lemons up at Blog@Newsarama. Click here if you'd like to read 'em.
Posted by Caleb at 7:35 PM

Did Muppet Show #1 come out this week or did you get an advance? Did I miss it?!

No, it comes out Wednesday. You did not miss it! Yet. But you might. If you don't get it Wednesday.

I will not miss it!