Not comics: Some rambling thoughts on The Narnia Cookbook: Foods from C.S. Lewis' The Chronicles of Narnia

The other day I took my niece to one of my local libraries, a very nice little library which is—surprisingly enough—completely devoid of a graphic novel section (The graphic novels they do have—Watchmen, some Gaiman stuff, Fruits Basket and Full Metal Alchemist—are intershelved with the juvenile fiction prose, organized by author).

While we were in the juvenile non-fiction, looking for books about the breed of puppy her family has, this book grabbed my eye: 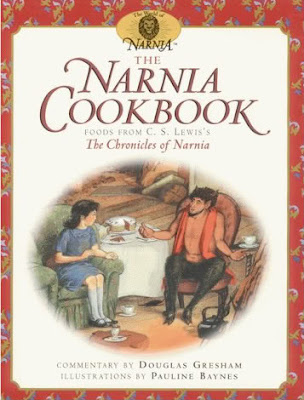 I doubt I’ve ever mentioned it on this site, on account of it not being a comic or anything, but I was really into The Chronicles of Narnia as a kid.

I was first introduced to them in fourth grade, when the “advanced” kids in my class, and elite half dozen or so, were given The Lion, The Witch and The Wardrobe to read. I wasn’t one of those half dozen, and actually having it demonstrated to me that I was, in fact, not all that smart, was probably one of the most important formative moments in my life—that day at school I sort of vowed to become smart, reading the damn thing in my free time in the library, and applying myself in school in general from that point on (Well, in most areas—I continued to never be very good at math, and never made it to the advanced math classes in high school).

I went to a Catholic grade school, so I suppose introducing Lewis’ mildly allegorical fantasy series to us probably made some teacher or administrator think they were awfully smart, giving us our medicine with a spoonful of sugar, but I honestly didn’t notice how Christian it actually was until much later.

Well, I realized that the Aslan and Emperor Beyond the Sea relationship was analogous to the father/son relationship between Jesus and God, and that “He’s not a tame lion” perfectly echoed the saying “God moves in mysterious ways,” but the whole Aslan-sacrificing-himself-on-the-Stone Table-to-save-others-and-then-rising-from-the-dead thing? I was probably rereading it for the third or fourth time in high school when that light bulb went off. So perhaps it’s no wonder I wasn’t considered among the advanced readers.

This book bore a “World of Narnia TM” seal above the title, with an irritated-looking lion radiating golden rays set on a gold oval hovering over the title, so I rightly assumed it was a product of a much more recent era than the seven Narnia books I read over and over (The boxed set I eventually bought was from Collier’s, who first published their version in 1970…The Narnia Cookbook is from 1998, and acquired by this library in 2000).

Obviously, I had to bring this home (I found a lot of other fun children’s books there, but I’m going to hold off writing about any art-centric books until I get my scanner situation straightened out).

C.S. Lewis’ stepson, Douglas Gresham, writes and introduction to the book, as well as introductions to each broad section (Breakfast, Lunch, Tea, Dinner, etc.), although he’s only given a “commentary by” credit. A Mary Kate Morgan has a bio on the back flap, but no credit elsewhere, so I’m not sure who wrote what exactly. (While Morgan has no byline, she is given a thank you on the title page for “her research and culinary expertise in the preparation of these recipes).

Each page or so opens with a paragraph or so about the food in question, which matter-of-factly discusses the countries of Narnia alongside those of our world when talking about imports and exports, likes and dislikes.

That’s followed by a quote from one of the books that mentions food in some way, followed by standard cook book formatted lists of ingredients and instructions, and Pauline Baynes’ delicate illustrations from the books, generally blown up to larger size than they’re usually seen in and colored.

It occurred to me while reading that it might have been fun if it were written from the viewpoint of one Narnian to another; for example if the work was premised as being an actual cookbook from Narnia that found its way into our world.

No such luck though. Gresham writes as himself addressing young readers who have experienced Narnaia in the books already, the most affectation that goes into it being that he takes it for granted that Narnia is real, saying things like “If you’ve ever been to Narnia, then you know,” or noting that the recipes are focused on those fit for Sons of Adam and Daughters of Eve, as the citizens of Narnia have such widely divergent diets, or that it’s considered in bad taste to serve eggs when there are Talking Birds of any kind around.

It’s not a bad idea for a book, as I remember food playing a big role in the books, each meal being recounted in great detail, and often intriguing me, since as an American kid in the 1980s I had never heard of a lot of the foods talked about in these books written by a guy in the UK in the 1950s.

I probably would have loved this when I was a kid, and even as a teenager or college student I would have been delighted to try making many of these recipes.

I became vegan near the end of college though, and am still vegetarian-bordering-on-vegan, and there’s not a damn thing I could make in here, really, beyond the entries on, like, a plate of figs or an assortment of fruit. I could probably do some of the baked goods with some substitutions, but it’s actually kind of remarkable to think how much meat and other animal products are consumed in Narnia, given that it’s a country in which talking animals make up a significant part of the citizenry.

Surely it would be, at the very least, gauche to eat animal flesh in Narnia, and, at the worst, something akin to cannibalism. I know there are divisions between normal animals and Talking Animals, and that The Sons of Adam wouldn’t eat venison from a talking Narnian Deer, but wouldn’t eating even the flesh of a non-talking deer that happens to leave in Narnia be pretty weird? What would your friends who are deer think?

None of these questions occurred to me while reading as a child of course, but approaching a cook book as an adult vegetarian with a mind to try out some of the recipes sure focused the issue for me: Narnia is a weird place.

One recipe that is quite noticeably absent is that of apples wrapped in bear meat, as eaten by Peter, Susan, Edmund, Lucy and their pissy dwarf friend in Prince Caspian.

That was such a particular meal, and the chapters during which is was arrived at written in such a way, that I’ve always remembered that detail and, in fact, that particular meal was probably the most memorable aspect of Prince Caspian for me. (That’s probably my least favorite book, and not a whole lot goes on in it, really).

Our heroes are lost in the forests of Narnia, and have been living off apples for a while, when they are attacked by a bear. The dwarf takes it down with an arrow, and then they butcher it and take some of the meat with them.

Here’s the dinner scene that so stuck with me:

The Dwarf had splendid ideas about cookery. Each apple (they still had a few of these) was wrapped up in bear’s meat—as if it was to be apple dumpling with meat instead of pastry, only much thicker—and spiked on a sharp stick and then roasted. And the juice of the apple worked all through the meat, like apple sauce with roast pork. Bear that has lived too much on other animals is not very nice, but bear that has had plenty of honey and fruit is excellent, and this turned out to be that sort of bear. It was a truly glorious meal.

That’s not in the book, not even with some sort of more reasonable meat substitution, like beef or pork or venison instead of bear. (Can people even eat bear? When I was kid it was one of the many animals I wanted to taste, because of this scene, but now the thought of bear meat seems particularly abhorrent.)

I think this meal finds its way into the cook book as “Lucy’s Roast Apples” in the desserts section, but instead of bear meat, the apples are complemented by brown sugar, raisins, cinnamon, whipped cream or ice cream and, “if you want to be really posh,” a little applejack or brandy.

If you’ve no aversions to dairy products though, I suppose this book would be pretty valuable. I know a younger version of Caleb would have liked to spend a night cooking up some of the suggested saddlebag, traveling foods like meat pastys, scotch eggs, apples, cheese and oatcakes and taken them for a long hike in the woods.

As is, I may just try making Mr. Tumnus’ cake with some substitutions, in part because Gehane writes “One of the leser known uses for a piece of nice cake like this is to fry a slice (about a half inch thick) in a little butter and have it for breakfast on a cold winter’s morning. It is a Dwarf’s delight.”

I don’t know about delighting dwarves, but fried cake sounds pretty good to me.
Posted by Caleb at 2:33 PM

The bear meal is also the most memorable part of that book for me!

If I recall correctly, there are both talking and non-talking animals in Narnia. There was mention that the non-talking ones were wild ones, which were perfectly expectable to eat.

Black Bear is perfectly edible. I work for my province's Wildlife Division and one of my supervisors was telling me last week about a delicious bear curry he'd made...