Trying to break the Wednesday habit in favor of reading super-comics in trade format can be pretty difficult, particularly if you’ve been reading new comics every Wednesday for along time.

Marvel Zombies 4 was a particularly difficult series to resist, as it was written by one of my favorite writers, Fred Van Lente (Action Philosophers, Incredible Hercules), drawn by the very talented Kev Walker who ably demonstrated his skills in Marvel Zombies 3, and was about a team of monster heroes comprised entirely of characters found on my shelf of Marvel Essential collections. 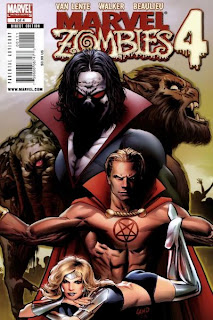 Who on earth would pay $4 for anything wrapped in that? I really want to know, so that I can look down on them from afar.

(That familiar-looking professional wrestler whose chest is caving in, by the way, is supposed to be The Son of Satan, and the lady in the underpants who looks like every lady Greg Land has cut-and-pasted onto a cover is suppose d to be one-time Man-Thing supporting character Jennifer Kale).

The cover of the trade paperback collection isn’t all that great, it’s one of Arthur Suydam’s increasingly tired zombie covers, which here doesn’t really work because formless muck-monsters and skeletons are kind of hard to zombify, but it’s not as depressingly awful as that Greg Land piece (What is, really?).

Unfortunately, the Greg Land covers are included in the trade collection as well, but at least it’s not the first thing you see. In fact, you can probably even Xacto-knife them out of the trade if you’re so inclined.

If you’ve read the previous series, you know Zombie Deadpool lead a Marvel Zombiverse invasion of “our” Marvel Universe, with the HQ of super-secret organization Alternate Reality Monitoring and Operational Response in Florida. It was successfully stopped, but part of Zombie Deadpool—specifically, his head—managed to escape, meaning the threat of a zombipocalypse spreading throughout the Marvel Universe still existed.

As this series opens, ARMOR doctor and Marvel Zombie victim Morbius, The Living Vampire has joined with Kale, Jack Russell (Of Werewolf By Night) and Damion Hellstorm, The Son of Satan to track down and destroy the head (and any zombies it may have created).

Van Lente’s plot was surprisingly complex, as it involved not only those two “sides” of the conflict, but also voodoo-style zombie maker The Black Talon and the Marvel universes kingpin of villains, The Hood (Seen most often in New Avengers and “Dark Reign” branded titles) and Dormammu, plus some Roxxon Corporation-hired supervillains serving as Blackwater-like security contractors. There are therefore a lot of players here, and while it never exactly gets convoluted, it’s hardly as straightforward as Marvel Zombies 3 was, and a lot less new reader friendly (Ididn’t have much problem personally, but it definitely lacks the instantaneous “Marvel heroes as zombies, got it” hooky premise that the original series had, and I probably would have been lost if I didn’t have a decent working knowledge of the Marvel Universe…I still felt I would have liked it more if I had greater knowledge too. Like, should I have been more excited to see The Night Shift? Maybe, if I knew who they were).

Of course, that same complexity, and the near-chaos of cameos it created is also a large part of the appeal of the book, seeing various Marvel characters bounce off of one another. It’s violent, it’s gory, it’s full of Marvel’s monsters, someone says “And whatsoever knows fear-- --BURNS AT THE TOUCH OF THE MAN-THING!” so sure, it’s a lot of fun. Even Deadpool wasn’t all that annoying, and Van Lente and Walker have a fun “action” scene of the zombified head of Deadpool eating a man Pac-Man-style.

Walker’s art is still pretty great. The action moves and flows clearly from panel to panel, the designs meld the radically different characters into the same narrative quite successfully and there’s a slightly sketchy aspect of his work that makes it look vaguely John Romita Jr-ish, only darker and less-distinct. A pretty perfect look for a book about Marvel zombies and monsters, really. (I’m not crazy about his Man-Thng though…he looks too little in many panels, as well as too much man and not enough thing.)

It ends pretty much where it began, with Morbius saying that his monster team worked well together and should maybe stick around, and Deadpool’s head escaping, but then this is the fourth Marvel Zombies series (not counting Marvel Zombies Return, which immediately follows it, and the Army of Darkness crossover business), so it shouldn’t come as any surprise that the story doesn’t end without preparing to start again.

After the conclusion of the title story, there’s a trio of black-and-white reprints of stories from 1973’s Tales of The Zombie, featuring Simon Garth, Marvel’s Zombie-with-a-capital-Z (who is featured in the main story, primarily as Deadpool’s head’s source of transportation). These are by Steve Gerber, Sal Buscema, Stan Lee, Bill Everett and Tom Palmer and Roy Thomas, and they’re full of gorgeous art.

The first story, for which Buscema provided layouts and Palmer finishes, was noteworthy in that it was full of female nudity—well, with strands of long hair or shadow obscuring nipples—and it is just beautiful, beautiful artwork. Those guys could really draw, so when they wanted to draw a sexy woman being sexy, the result was a recognizably human beautiful woman. And, um, obviously “recognizably human” should be the bare minimum of what a professional artist should be able to accomplish, not something worth singling out for special praise, but it was so obvious how good Buscema and Palmer were at drawing since their chessecake-filled story came so soon after this hideous image by Greg Land. 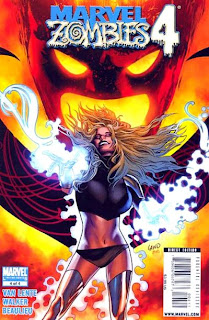 *I was dismayed to read this quick note from John Jackson Miller noting that in March, for the first time ever, there were more $3.99 books than $2.99 books in Diamond’s top 300 (Although it’s worth noting that Miller didn’t stipulate how many of those $3.99 books were only 22-pages vs. how many were 30-pages or more…as a consumer, it’s important to take into account whether or not a publisher is giving you more content for a higher price or not). I was somewhat cheered up by Tom Spurgeon’s “slightly horrified” reaction to the fact, and this comparison in discussing the price hike: “The justifications for it feel like a teenager deciding to drive an increasing number of her errands at 90 mph and admitting this is crazy but pointing out they've managed to do this so far without totaling the car.”

This book is just as violent and gory as any of those book, although a lot less shockingly so, because one expects to see violence and gore in a comic book about monsters destroying the cannibalistic undead more than one expects to see Wonder Dog stalk and maul Marvin and Wendy from Super Friends.

But this has a baby being eaten on page three, a head getting smashed like a water balloon on page five, exploding fish monsters that bathe Morbius in gore, Deadpool’s aforementioned Pac-Man impression, a giant amoeboid thing impaling characters, a red blood rain that melts human flesh and bone on contact. Plus, some squicky sex talk (“Let’s…find somewhere you can slip into something more comfortable. Like me.")

And you know, it’s perfectly fine here. The book says “Parental Advisory” in small font on the back of the book near the UPC symbol, so there’s none of that Trojan horse bullshit and, again, this is a horror comic book about monsters destroying each other made for grown-ups and marketed to grown-ups, instead of an all-ages superhero comic. (And sorry if it sounds like I’m picking on Teen Titans here; it’s just the most egregious example, and the one freshest in my memory from having just read it).

I guess it’s just one of those things I don’t understand about superhero comics. Why put all that violent, gory, mature audiences content in all-ages super-books when there are already so many alternatives for violent, gory, mature audiences content, in many cases in books published by the same two publishers who do all the superhero stuff and, at least in this particular case, even set in their superhero world?

If DC thinks their readers want ultraviolent, gore-filled horror comics set in the DCU, why don’t they just publish such comics and market ‘em, instead of trying to turn Teen Titans or Justice League or whatever into those sorts of comics?

Okay, I promise I’m going to shut up about that run of Teen Titans forever now.
Posted by Caleb at 3:15 PM

Greg Land is actually getting worse.

the "Deadpool: Merc with a mouth" ongoing (since relegated to 13-issue maxi-series), picks up after the conclusion of Marvel zombies 4.

Speaking of Van Lente's zombie work, "Marvel zombies 5"#1 was out last week, and it's pretty decent and much more fun and coherent then the Midnight sons mini. It really brought the humor of "Marvel zombies 3" back to the title.

MZ5 has an alternate Marvel Earth where its still the Old West, Romero-style zombies (they're even classified as that), Aaron Stack and Howard the Freaking Duck. Its simply luverly...

I'm one of those who bought MZ4 in singles and all I can say is that the terrible Land covers were just something I had to try and ignore. As for the price jump, its annoying but I just don't find it as personally aggravating as you do...

I need to pick up the hardcovers for MZ4 and MZReturn...