There was another comics convention this week? I guess that's why they refer to this as "convention season," huh? 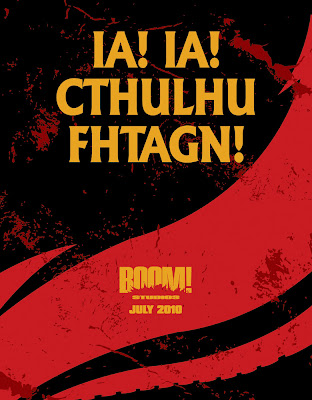 I can't tell you guys how happy I am that one of my "jobs" in life is one in which getting an email with the subject line "IA! IA! CTHULHU FHTAGN!" That's a teaser ad for a new Boom Studios ongoing, The Calling: Cthulhu Chronicles by Michael Alan Nelson and Johanna Stokes, by the way. It was one of the many, many, many announcements made at the new Chicago Comic & Entertainment Expo (acronym-ed into C2E2), which the big direct market publishers certainly seem to be embracing, at least judging by that metric.


—I would hate it if New Comic Book Day shifted from Wednesday to Tuesday, as these articles report is something Diamond's considering, and not just because it would mean having to change the name of my blog (And after almost fear years of building my brand, too!) and my regular Tuesday night column at Blog@.

It makes little business sense to me for the industry to move the day of their new releases to Tuesday, the day that new books, new CDs, and new DVDs come out, since there’s an increased chance that a consumers disposable entertainment money could go to one of those things instead of comics (And oh hey, what about new video games? Those come out on Tuesdays too?).

Oh yeah, that’s another thing we’d have to change…the Wednesday Crowd would end up being the Tuesday Crowd…


—I have no way of knowing if Mark Millar’s temporary online umbrage regarding the X-Men office doing an X-Men-vs.-Vampires story featuring Blade was some dumb bit of self-promotion or genuine. If the former, I’m furthering his cause, if the latter, then the answer to his “What do I do?” question seems fairly obvious: Don’t start talking about your story plans in public five years before those comics are going to see print.

And it certainly wouldn’t hurt to come up with some more original story ideas than “The X-Men fight vampires, Marvel Comics’ premiere vampire slayer is involved.”
Robot 6 have little write-ups of Millar's chatter on the subject here and here.


—Dark Horse has hired Marc Andreyko to write a comic book spin-off of Let Me In, the English-language remake of the quite excellent Swedish vampire movie Let The Right One In. Which was based on a novel. That will make this comic book a spin-off of a remake of an adaptation of a book. Awesome…?

I’ve revisited it since, and after a life-time of D&D-related licensed material (ranging from that awesome Saturday morning cartoon to that awful movie with Thora Birch and Jeremy Irons, and a lot of paperback novels in between), I’ve come to the conclusion that the quality of the final product has a lot more to do with who’s creating it rather than something inherent in the license itself.

While I haven’t read many comics based on D&D since, I’ll definitely be interested in giving the IDW books a look when they come out. (And it looks like I can now add “Write Dungeons & Dragons comics scripts for IDW” right between “Write Batman: Club of Heroes for DC” and “Write Ultimate Freddie Prinze Jr.” on my list of dream jobs).


—Steve Rogers definitely won’t be taking back the Captain America cowl and shield after Siege, at least not immediately. It looks like he’ll be the new Nick Fury—has that been announced anywhere yet? Or is that just conventional wisdom?—and will have a new costume that looks part-SHIELD uniform, part patriotic hero uniform. Ed Brubaker will be writing a four-issue Steve Rogers: Super-Soldier series, which will be drawn by Dale Eaglesham, who sure didn’t stick with Fantastic Four very long (What’s the average length of a “run” on a monthly these days? Six months? Twelve?).

I do not care for the way he draws Rogers’ five o’ clock shadow.


—I realize that Neil Gaiman, Alisa Kwitney and Karen Berger didn’t invent the term “children’s crusade” when Vertigo did its one and only summer annual crossover ala the DCU at the time, and thus have no official or legal ownership over the title, but isn’t it at least a little gauche for Marvel to call Allan Heinberg and Jim Cheung’s next Young Avengers limited series The Children’s Crusade?

And on the subject of Vertigo’s Children’s Crusade, I don’t see a collection of it listed on Vertigo’s graphic novels page, nor on Amazon.com. How on Earth is it that DC/Vertigo is sitting on Neil Gaiman material that they’re not putting into trade format and shoving out into bookstores and libraries?

A trade paperback with the name Neil Gaiman on the cover is one of the few sure things in the publishing industry. If DC’s not going to put a Children’s Crusade trade together to make money, at the very least they should publish one to spite Marvel.

(If you haven’t read it yet, you may want to check any $1 boxes you come across. It was from the early ‘90s, back when shops ordered huge, and chapters of it appear pretty frequently in such discount bins. It’s not Gaiman’s best work, but it serves as a pretty great introduction to the Vertigo “Universe”/publishing line at the time, starring the characters from Sandman, Doom Patrol, Animal Man, Swamp Thing, Black Orchid and what would become the ongoing Books of Magic, and written by Gaiman, Kwitney and the regular writers for most of those books).


—The spoiled partial line-up of the Secret Avengers team, seen in this leaked (by leak-ees unknown) image here, didn’t do much for me, but the full line-up announced over the weekend sounds a lot more exciting: Steve Rogers, Sharon Carter, Black Widow, Nova, Valkyrie, Moon Knight, The Beast, War Machine and the Irredeemable Ant-Man.

Yes, just adding Captain America’s girlfriend and the funny Ant-Man are enough to excite me.

It’s just too bad there are 15 different Avengers titles at the moment and apparently none of ‘em have Namor in ‘em…
Posted by Caleb at 5:05 PM

About the Tuesday release day:

It DOES make sense if comic companies made it clear to Diamond that they were eventually going to release comics on iTunes/online the same day as new music. Why make the paper fans wait a day when the digital crowd get their comics?

If this were the case, at least the comic stores wouldn't immediately be hurt. And I don't believe the iPad hype that everyone is going to stop buying print.

In the next ten years, it might be wise for a comic store owner to bulk up on trades and start thinking about different revenue streams.