A short review of something that isn't a comic book: The Vermont Monster Guide 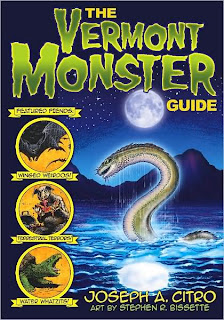 The Vermont Monster Guide (University Press of New England; 2009) is apparently of only very limited interest outside of the state of Vermont, as it took me about six months to find a library willing to loan a copy to an Ohio library.

I suppose that’s not all that unusual, given that the book’s local interest factor is right there in the title, and, after having finally read it, I suppose I’d agree that it’s probably of the greatest interest to Vermonters. So why was I, a lifelong Ohioan, looking for it so long, and why am I bothering to mention it on a comics blog?

And it features a lot of them. There are about 60 different monsters included in the Guide, and almost every single one rates a black and white illustration by Bissette, generally printed at somewhere between half-a-page and a full-page in terms of size. Monsters are, of course, a specialty of Bissette’s, and author Joseph A. Citro, who previously collaborated with Bissette on a couple of Vermont ghost guides, gives him a wide variety of different beasts to draw here.

I wasn’t terribly impressed with the book as a package or object, however. It’s designed by Eric M. Brooks, and it’s about the size of a standard trade paperback graphic novel…perhaps a few inches wider. It seems as if the size and page count were determined first, however, and the prose and pictures fit into the pre-established parameters. That is, the book looks as if it the contents serve the design, rather than the design serving the contents, so there’s a lot of empty white, wasted space, a few blank pages and a rather amateurish look to the book.

In the write-ups, Citro seems to have been striving toward cataloging the monsters rather than writing about them, resulting in a thankfully wide and surprisingly rich variety of subjects, with what reads like original reporting on many of them, but not very much detail. Many accounts consist of no more than a single anecdote or source, which can make some of the entries frustrating—they can be just enough to intrigue you to want to learn more, but not long enough to satiate the curiosity they inspire (This can’t be for a lack of material on all of them, either; one of the monsters included is Lake Champlain’s monster Champ, one of the most famous cryptid creatures in North America).

The Guide is broken up into three sections: Earth, Water and Air, and each entry gets a Bissette illustration, the monster name in a ‘50s/’60s horror movie font, notations of the location and date of the monster’s sightings, and then a few paragraphs about them.

These monsters include some well-known ones familiar to anyone who reads much about cryptozoology, as reports of them are nationwide: phantom big cats, giant snakes, lake monsters, Bigfoot and other such “BHMs” (Big Hairy Monsters), Thunderbirds, werewolves, the Wendigo, vampires and space aliens (these last are given an entry entitled “Monsters from Outer Space”).

There are plenty of more localized and thus more unique monsters, however, like the self-explanatory sounding Pigman, the bulletproof buck Old Ironsides and the murderous, bodiless, self-animated, Thing-like Purple Hand. And there are a few which are so weird and specific that they sound real, if only because they don’t sound like the sort of thing someone would make up, like the Long-Lggedy Cats (alley cats with very long legs) or Steggy (a small, stegosaurus-shaped mammal).

Of course, both groups of monsters provide interesting opportunities to study Bissette’s artwork—specifically his creature design chops. His Champ, shown on the cover, provides an example of Bissette’s rendering of your typical sea serpent/lake monster (there’s a more reptilian version on the inside as well), and he provides several variations of long-necked, water-going reptiles, as The Moore Lake Monster, The Mysterious Memphre and the Willoughby Wisp are of the same basic type as Champ (to help distinguish them, each drawing is staged a bit differently; the Moore Lake Monster, for example, is shown as a vague shape with bright eyes in the gloom within the background of a piece, while the focus is on two human victims in the foreground).

Similarly, the Bigfoot entry allows Bissette to make the most popular and most-often illustrated of North America’s cryptid’s his own, and he provides a slim, somewhat elongated erect beast with long arms and a very gorilla-like face, walking knee-deep through water in the rain. As with the various water monsters, there are several of Bigfoot’s cousins in here, and it’s interesting to see Bissette differentiate them with different facial structures, expressions and/or staging—the Windigo, The Forest Wanderer, The Hopping Horror and the Goonyak all fit the same basic description, but are presented as entirely different species in very different illustration pieces.

Where The Guide works best, I think, are the few instances where Citro has a very unique sounding monster or story about a monster, but relatively little detail, and Bissette has enough room to make up his own visual details, resulting in a single image that tells a dramatic story of its own and, when read along with the prose, suggests a very specific track for one’s imagination to travel down, the pace and distance left up to the individual reader, and how they react to the image and the few details written beside it.

For example, there’s Fanny’s Fiend, the name given to some sort of water-going monster 12-year-old Fanny Allen saw speeding toward her out of the Connecticut River, described only as being “of extraordinary size and horrid shape” and having “an aspect more fierce and terrible than the bear or world from the forest.” Bissette draws a huge, bulbous, orb-shaped head so big that it’s vacant eyes are larger than the girl’s head. Only part of it is visible above the water, and it looks nothing like any animal species one could name.

(Also of special note are Bissette’s werewolf, which is simply a wolf standing on it’s hind legs and looking remarkably creepy with that single change; The Green Swamp Monster, which fans of another green swamp monster Bissette has drawn may be especially interested in; and The Man-Eating Stone, which is similar to Fanny’s Fiend in how much it suggests with a single drawing and only a few sentences of explanation).

If one lives in Vermont and is interested in folklore and/or cryptozoology, then The Vermont Monster Guide is probably a must-read. Certainly if one’s a big fan of Bissette’s, it’s a must-read. Otherwise, I’d give it a somewhat qualified reccomendation—it’s insubstantial enough that you can plow through it in a single sitting, which makes for an okay introduction to a varied cast of creatures, but likely won’t satisfy anyone too terribly interested in the subject. 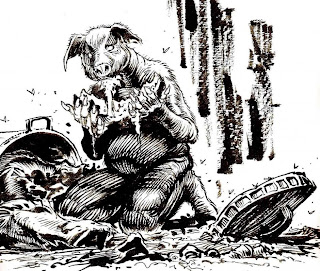 (Bissette's illustration of Pigman, a man-sized monster with the head of a pig that was active in the early '70s)
Posted by Caleb at 7:59 PM

Bissette did a nice illustration/map of Vermont with all the various legends and locales with Citro several years ago. Quite a nice piece of work.