Niece #1 has just started Sunday school classes in order to prepare for the sacrament of reconciliation and then, next year, first communion. Because she expressed an interest in reading the Bible and her mother expressed disinterest in replacing Junie B. Jones and Ramona books with the Old Testament, I dug out my old The Children's Bible, a a gift from my grandparents on the occasion of my first communion.

It's from Golden Press and has a 1965 copyright, and it's basically a heavily illustrated and greatly simplified 510-page version of the bible, with an emphasis on the characters and stories and summaries of the more boring parts. I'd have to reread it to see, but I'm fairly certain that excised all the weird sex (Flipping through, it looks like they gloss over the story of Sodom and Gamorrah, and the Book of Revelation is reduced to two pages headlined "The Vision of John").

Folded up in the back of it, I found a piece of faded piece of manila paper, with "Caleb Mozzocco" in cursive pencil on it. Unfolding it, I found a pencil line down the middle of the paper, with two pictures, one on each side. I guess I did this when I was eight in religion class (I went to Catholic school, so that was one of our subjects).

I don't remember the exact parameters of the assignment, but I seem to remember a lot of them which involved folding pieces of paper in half and drawing or writing two things on either side of the fold.

On the left side, my late grandmother and I making a bed at her house... 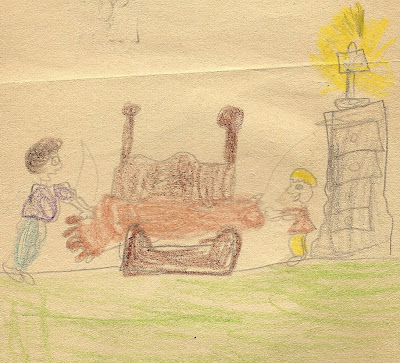 And on the right side, Jesus preaching to the apostles... 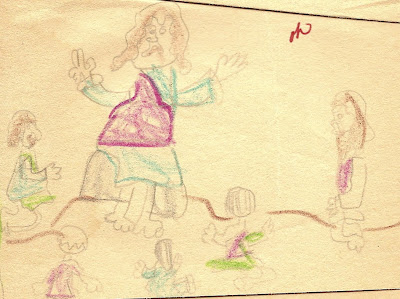 Apparently, as an eight-year-old boy, I was under the impression that Jesus was a giant. Or that he had very tiny apostles, I guess. Also, Jesus had six fingers on his right hand, and dog paws for feet. (It's true; ask Dan Brown).

My teacher apparently didn't grade based on artistic merit however, as I earned an "ok," as you can see in red cursive there.
Posted by Caleb at 7:42 PM

Labels: phoning it in, sketchbook

I had this same Bible! I was even then unnerved by the blonde Jesus.