Action Comics Weekly #607: The one where Hal Jordan solves the conflict in the Middle East 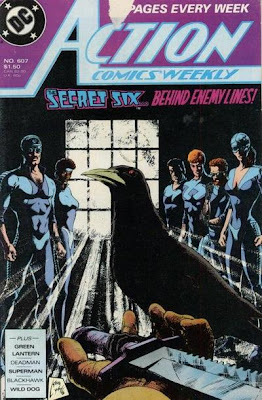 DC's 1988 weekly anthology series seemed to have hit its creative apex with issue #606, the one featuring a Green Lantern story in which all of his friends and allies tell him to get lost. From that lofty point, there's really nowhere to go but down, but, thankfully, "James Owsley" and Tod Smith's GL story in #607 isn't that far down Awesome Comic Mountain. It's still the story of unlovable loser Hal Jordan, living his sucky life and flying all over being told he sucks by everyone he meets.

It's just this time it's mostly random people telling him he sucks, instead of Alfred Pennyworth or Green Arrow. What this lacks in Justice Leaguer-on-Justice Leaguer dickishnes, it makes up for in politics.

After all, this is the issue of Action Comics Weekly in which Green Lantern Hal Jordan totally brings peace to the Middle East (temporarily), uniting the warring factions in common cause (that is, throwing rocks at Hal Jordan).

The GL story, entitled "Guilty!", opens with a full-page splash of our hero and his then-girlfriend in a Coast City hotel bed. Arisa, Hal's golden-skinned, elf-eared, femullet-sporting alien girlfriend, is sitting up in bed, eating the latest of several candy bars (judging by the number of crumpled-up wrappers on the bed) and saying the word "Chuckle!' at the television set. That's how Arisa laughs, I guess; she doesn't chuckles, she just says "Chuckle." The program she's watching is Oprah's. It's about reformed mass killers. 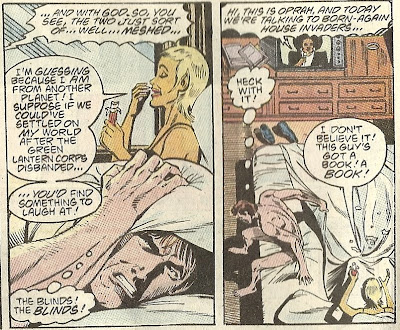 Arisa is, by the way, literally watching Oprah. Like, they say "Oprah" repeatedly. And in the second of the above panels? They show Oprah. I don't know why exactly, but that seems kind of cool and daring to me—I guess because I know today neither DC nor Marvel would use Oprah's name and face like that (And man, just wait until you see next issue's GL story, guest-starring Oprah!).

In the second panel above, you can also see Hal getting out of bed. Yes, Hal sleeps in the nude! Or else just wears tiny, tiny, tiny briefs.

And since I know my audience so well: 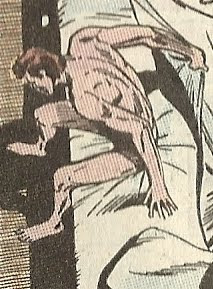 Hal finally gives up trying to sleep in past nine, thinking "Heck with it!" and rising: 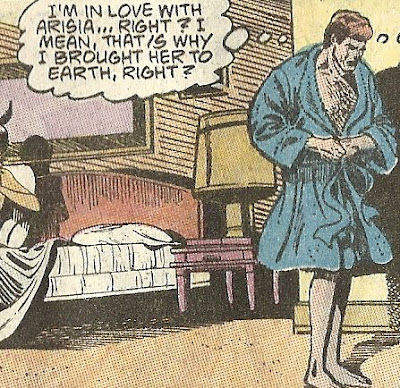 Er, if you have to ask Hal, well then, the answer's probably no...

Hal goes on to thought balloon, "Didn't sleep much last night. That's becoming a habit. Can't stop thinking about John." But don't get too excited about the comment, slash-fiction fans—Hal's merely segueing into a nine-panel recap of the events of the series so far, while taking a "walk" to "clear the cobwebs." This means putting on his superhero suit and then flying all over the world: Up into space, over a Middle Eastern desert, to s snow-topped mountain top, to the sphinx at Giza.

Then, in the next panel, Green Lantern gets topical, only vaguely so: "Later, over a remote shore settlement within a middle eastern country..."

I'm assuming that's supposed to be the part of world that the Palestinians and Israelis were fighting over in 1988. And before. And are still fighting over today. But the comic book doesn't really do much to provide context and, since this is the DC Universe, which is full of stand-in cities and countries like Gotham City and Qurac, I guess this could be a dispute between the Quisraelis and Schmalestinians.

One side is armed with rocks and have scarves tied around their heads and faces. The other side are wearing military uniforms and carrying machine guns. Both speak what looks like it's supposed to be Arabic. Or maybe it is Arabic? I don't know.

At any rate, from high up in the sky, Hal sees a few overturned cars on fire, with people scrambling around like ants. "Nothing makes any sense anymore!" he thinks, regarding his problems with Carol and John, "Just like those rioters fighting police with bricks and stones!"

What's that Hal? maybe there's a lesson in there somewhere...? Are you saying maybe America shouldn't try to solve the world's problems, because it only makes things worse? Is Hal Jordan an isolationist? Hal, you sound like some kinda crazy pinko in this story! Don't be such a sissy! Intervening always makes things better!

Hal realizes this himself in the very next panel, of course, when he sees a woman running through the melee cradling a baby. She falls down, and Hal springs into action—well, he points his ring to create some action.

"Now this is much easier!" Hal thinks "No right or wrong...no moral debate...that woman's life is at stake! This riot stops now!"

He employs the time-tested tools of riot dispersal: Two giant green electric fans to blow away the tear gas, and a giant green fire extinguisher to put out the car fires. Problem solved?

No, the heavily-armed side of the conflict wants to start some shit with GL! See what I mean about the language? Is that Arabic, or just an Arabic-looking font? Is it, I don't know, Farsi? Urdu? It doesn't look Hebrew, but I don't really know what Hebrew looks like anymore than I know what Farsi, Urdu or Arabic look like.

There's no translation notes to indicate what language it is, or what they might be saying. I assume it's, "Look! It's that fucking guy! Shoot him!"

And then Hal just straight up solves the whole crisis: 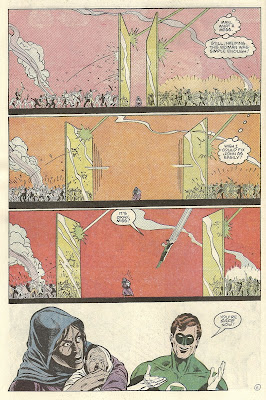 Sliding green forcefields! Why didn't Clinton think of that?

I didn't scan the very next panel, after the one where the tiny-handed Hal Jordan smiles, "You're safe now," but I should have, because the woman tosses her baby into the crook of her right arm in order to unleash a devastating, left-handed slap on Hal Jordan, complete with an little yellow explosion effect. It's a slap so hard, Hal is rubbing his face for a few panels.

Realizing that the woman is afraid of him, and that the medical services won't attend to her while he's standing next to her, he flies away. The whole world hates him now! Why is that? (I think it's because he's terrible. Is that the reason?) Hal assumes there's only one solution to his PR problem, and withe the courage and willpower that originally earned him his power ring, he goes for it: 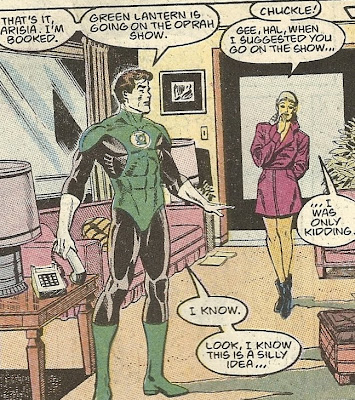 Yes! Hal Jordan is going to go on Oprah! And he really does, in the next issue. But that will have to wait until another post.

Anything else of note happen in this issue?

Well the Deadman story got even nuttier, which is something of a feat, since it began with the ghost of a dead acrobat fighting the CIA and ancient astronauts in Central America. In previous chapters, Deadman escaped captivity at the hands of the CIA, and was pulled through an ancient Sumerian jar into Hell by the devil himself. In the last installment, D.B. Cooper appeared with an offer to help Deadman escape from Hell.

That's where "Escape From Hell" picks up, with D.B. and DM scaling the sheer cliff face of a giant mountain. As they near the top, D.B. advises Deadman not to the old man in the cave, and Deadman's all like, "What?" and then he starts complaining and oh hey look, what's that? 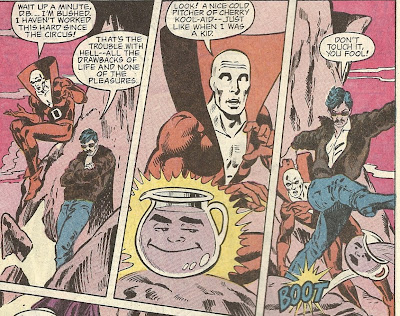 What the--? Hey, come on D.B. Cooper, what's the big idea? Sure, Kool-Aid Man's face looked a little...off-model, but so what? Maybe it was just a generic-- 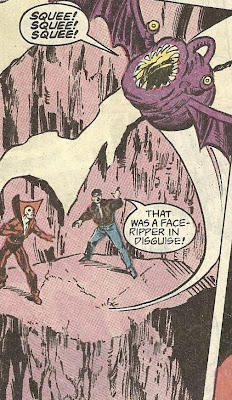 I wish the next panel had some variation of Deadman asking, "A face-ripper? What's that?" or "What's it do?" Sadly, he just goes on complaining about his thirst.

They eventually get to the top of the mountain, where Deadman sees an elevator. Pushing the button, he sees his sensei, or a guy named "Sensei," dressed like a bellhop. Wait, Deadman exposits when D.B. tells him not to talk to him, as this is the old man in the cave. "It's the O-sensei, former leader of a gang of thugees," DM explains. "They were responsible for my murder."

Anyway, D.B. Cooper or whoever points the way to a cave that leads to Earth and a team-up with the Reagans. (In just two more issues!)

Check out this scene: 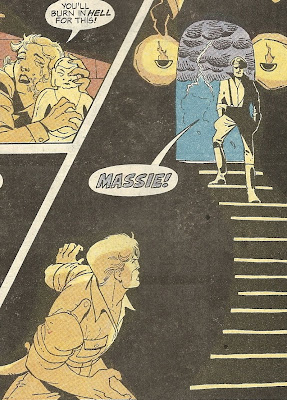 Okay, it doesn't scan all that well given the shape of the panel, but see how Blackhawk dramatically appears in the doorway there, just as a bolt of lighting streaks out of the night skies in the background? And, more importantly, see how high he is in relation to his adversary?

This is the very next panel: 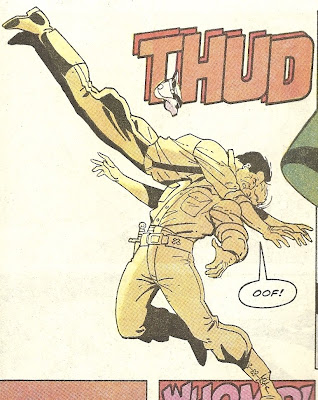 Blackhawk basically just leapt from the tenth stair up, God knows how man feet away that is, and landed face-first onto his opponent. That was his attack! He literally hurled himself at his foe, and hit him with his own face. That's...that's a really amazing panel right there.

It leads to another pretty cool fight scene. One of the things I really like about this Blackhawk strip is that the hero, while generally winning his fights, really takes a pounding during them. As fun as it is to read scenes featuring an invincible, unstoppable bad-ass like Batman just wrecking large numbers of enemies, it's cool to read fights where the protagonist is just a regular-ish dude who has to take it just about as well as he gives it. And I say regular-ish instead of regular because, Jesus Christ, he threw himself from the top of the stairs and hit that guy's face with his own face.

Anyway, here are two panels of Blackhawk landing a blow and taking one: 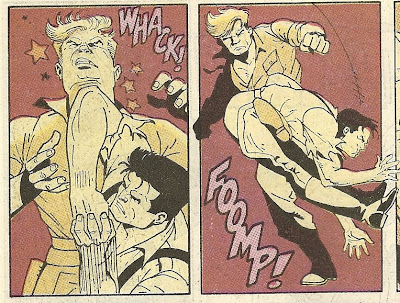 I really like the way Burchett draws 'hawk wrapped around the guy's foot. How hard do you have to kick a man to have him fold around your foot like that?

And that's the end of Action Comics #607. Next issue, Hal Jordan goes on Oprah! And probably some other stuff happens too!
Posted by Caleb at 6:37 PM

The text is either arabic or farsi (they share the same script).

Nekkid Hal! You do indeed know your audience. Thank you Cal!

Hal was SUCH a douchebag in these particular books. Thank goodness for the Yellow Space Parasite, at least that way I can actually say to myself that he's possessed and it's not entirely his fault.

That Blackhawk story looks like a hoot. Nothing like leading with your face. It's really such a Hal sort of thing to do.

Well, it's definitely not Farsi. At least, nothing comprehensible. I don't really know Arabic, but based on the sounds of the "words" I think it's not that either. Just a random mix of the letters of the alphabet.

Huh. I did not know that. Thanks guys!