When I review a kids comic that has an activity portion, like DC's Super Friends, for example, I'll often try to do the activity before reviewing the comic—mostly for fun, but also because I kind of want to try it out and see how hard it is or whether or not it works.

I thought about doing something similar with Barry's new book. Like, instead of attempting to write a formal review of it—which I did at Blog@ just today—I would spend a few weeks going through the book, activity by activity, and trying them all out.

I've been so pressed for time lately though that it seemed like an overly-intensive way to approach a comic book when I should probably spend more time doing my own thing, so I went ahead and tried to just write a review of the book with words based solely on my experience of reading it, rather than doing it.

I did rush through a couple activities, though. Barry includes sections on how to draw her smoking monkey and a few of the characters that appear throughout in neat little pieces like this: 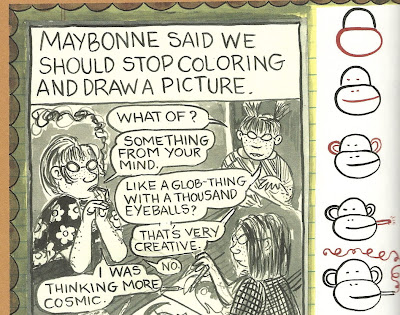 I tried a couple on an index card.

Here's that smoking monkey, Marlys-in-12-easy-steps, Arna in ten-steps (she's much harder to draw, according to Picture This), imaginary friend Mr. Trunk, and a bat-like creature seen throughout the book: 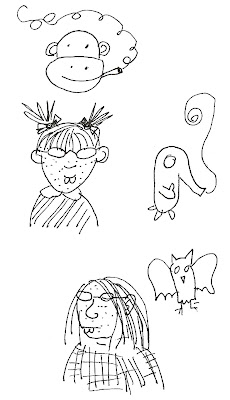 Now go on, get out of here and go read my review of Picture This. Or, better yet, skip the middle man and just go find yourself a copy of Picture This and read that instead.
Posted by Caleb at 12:15 PM