Think about this for a moment, won't you? 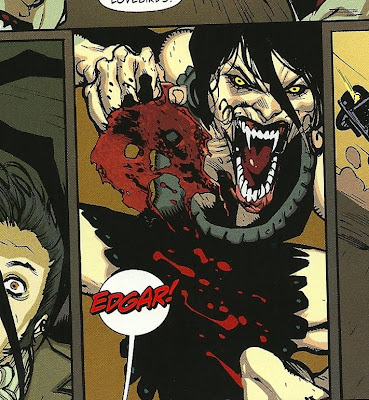 The above image is a very good drawing of someone (here, a vampire) tearing someone's face off. It's drawn by Rafael Albuquerque, and it's from an issue of American Vampire (although I first encountered it in the American Vampire Vol. 1 collection which, you may recall, I rather liked).

Albuquerque is a great artist, so it's no surprise that the above panel is very well-drawn. The point-of-view chosen is the scariest, as the reader (or, in this case, the viewer) sees the vampire from the perspective of the victim—if that vampire were jumping at you and ripping off your face, that's the angle you'd see her from. Also, you might see that red thing flapping in her hand and, after a second or two, realize that the holes in it correspond to where one's eyes, nose and mouth would be and that Oh my God she just ripped off my face!

That's one of the great things about the panel, really. It depicts what has to be one of the least subtle subjects for one of the respresentational arts—someone getting their face ripped off—in a rather subtle fashion.

Oddly enough, the reason I lingered on the panel for so long when initially reading it, beyond the extra few split-seconds it took me to realize the shape of that bit of red flesh and what the shape signified, was that I had previously seen a pretty poorly-produced drawing of someone ripping someone else's face off in a comic book by this very same publisher: 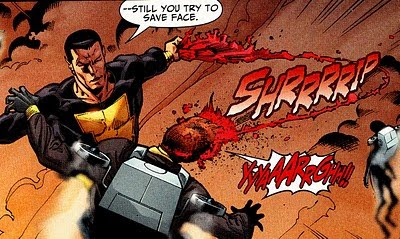 It's from one of the issues of DC Comics' 2007 miniseries World War III, and I'm reasonably certain it was penciled by Patrick Oliffe (the series had several pencillers and inkers).

As you can probably see, it's nowhere near as strong an image. The blob of red flesh in Black Adam's hand isn't recognizable as a face and is, in fact, probably too big to even be a face, given that it's bigger than the victim's whole head. The act itself isn't clear from the image alone either, and without the dialogue alluding to the fact that that the victim was "losing face," the drawing could just as easily be interpreted as Black Adam slapping his victim across the face with a rack of ribs smothered in a great deal of barbecue sauce.

I think that says something about the necessity of—or at least the usefulness—of bad comics.

Um, I'm not sure what it says exactly, but I'm fairly certain it says something.
Posted by Caleb at 4:34 PM