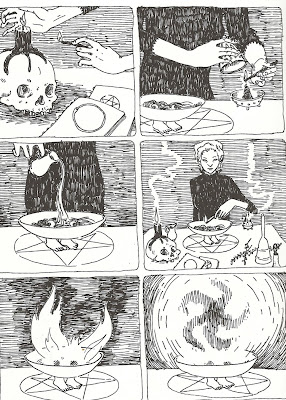 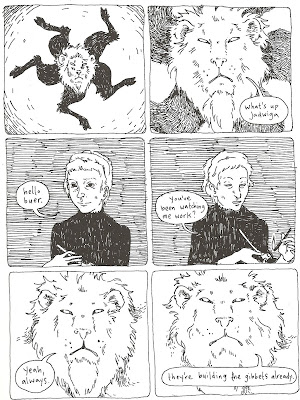 One of the many, many things I liked about Julia Gfrörer’s Flesh and Bone was the way that the demon character Buer—the character above who appears as a lion's head radiating goat legs—speaks. Flesh and Blood's setting is rather timeless, quite appropriate for a story with such a folkloric feel, and it seems like it could have happened pretty much any time in the last, say, thousand years or so. There's no technology or other clues in which to establish an exact time period—wait, there is a loom in one panel, so I guess it occurred sometime after the invention of the loom...?

At any rate, it seems to occur at some point in the past. (It could occur today, although it would have to be in a rather isolate, rural place). But the demon greets the witch with a "what's up," and later refers to something as bullshit and speaks with more modern idioms. I thought that was kind of neat; a demon would supposedly be some sort of extra-dimensional creature who might experience time differently than human beings, and thus it's more inspired than off-putting to hear him ask this witch lady living in a little house in the woods and working on her loom in her free time with a "What's up."

For a full review of Flesh and Bone, click over to Blog@, where I have a few hundred words on it.

On the subject of reviews, I apologize for EDILW going update-less yesterday. I visited my closest comic shop yesterday and spent most of my free time reading the last few Wednesdays worth of new-ish comics. I should have a "Comic Shop Comics" column of reviews up later tonight.
Posted by Caleb at 6:26 AM

I was thinking pretty much the same way about Buer's speech. He's outside of the romance of the story, so he doesn't talk like a romance character, and he tries to remind Jadwiga not to get caught up in it either.

The time period is anybody's guess, I didn't have one in mind.