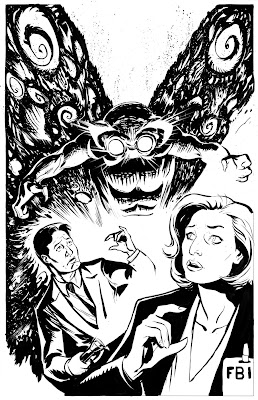 ComicsAlliance regularly highlights the work of particular artists by posting galleries of their work, and this week Caleb "The Other Caleb" Goellner featured the work of Dave Stokes. Among his pieces was the above, a commission of the X-Files' Mulder and Scully encountering The Mothman.

The wings are a little too mothy, but Stokes' design of the creature's head, with an apparent lack of neck, looks pretty true to the reported sightings and resultant sketches of the "real" Mothman.

By the way, Mothman never appeared in The X-Files itself, but in the 1997 fifth season episode "Detour," the agents encounter an invisible, red-eyed killer creature in the woods of Western Florida. The creature reminds Mulder of the Mothman of Point Pleasant, West Virginia, and in a couple lines of dialogue he cites the Mothman and its hometown by name ("I've got an X-file dated back to 1952 on it"). Apart from having red eyes, the creatures don't really resemble the Mothman in either appearance or behavior.
Posted by Caleb at 11:58 AM