Dominique Laveau: Voodoo Child #1 (DC Comics) I suppose the Jimi Hendrix allusion in the title should have tipped me off, but this wasn't really what I was hoping it would be. I believe when I first heard of this project I mentioned that I would probably better enjoy a comic book talking about the "true" story of the historical Laveau—or at least an exploration of the real-world folklore that has sprung up around the real person or people lost to history—rather than some sort of story about her fictional descendent inheriting her mantle, but I thought I'd give it a shot.

It does have a lot going for it, including gorgeous cover art by Rafael Grampá, whose continued work in that capacity I suspect will make this one of those books you're happy to see around, even if you don't read it, just because it looks so nice on the comic shop shelves (Fables is like that for me). And the interior art is from Denys Cowan, inked by John Floyd, and Denys Cowan is a hell of an artist. And I've never read anything by Selwyn Seyfu Hinds—who I find out in the "On The Ledge" column in this very issue is TV producer who has previously written two prose non-fiction books—which at least means I had no reason to avoid his work.

That work's not bad, of course, but the book didn't really grab me. Throughout I mostly just felt strange about it, alternately thinking, "Wow, this really reads like an old-school, first-generation Vertigo book," whenever I read a narration box of poetic-like phrases talking up elements of the New Orleans setting or commenting ironically on the events in Cowan's panels, and thinking, "Wow, this reads like one of those high-concept TV/movie pitch books that I'm more used to seeing from Boom or Radical or Virgin or Dynamite or Whoever" when a new plot element introduced itself. Parts of it—quite a few, really—almost read like a superhero book, complete with the splashpage, cliffhanger ending of a guy in a bit coat and a gun introducing himself 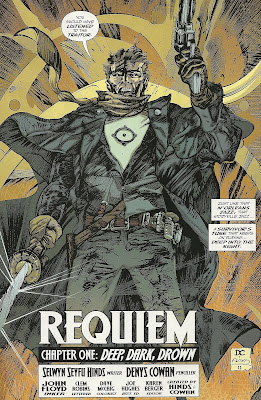 and the novice hero discovering her new powers in a moment of deadly stress. 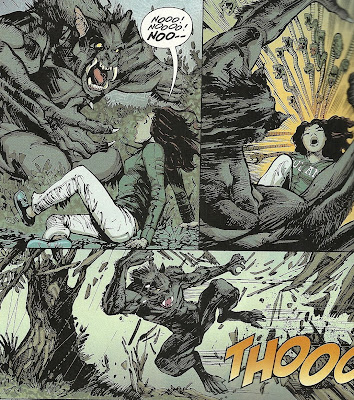 It was when I got to the third panel on the ninth page that I realized that this book most definitely wasn't for me. That's where a voodoo practicioner who might also be a priest exposits to himself that "One hundred years of hard-won peace. The days of blood between Loa, loup garou, vampire, witch hunter and houngan long behind us."

So supernatural factions, including werewolves and vampires, fighting each other in New Orleans? Yeah, I can do without that, thanks.

Okay, I'm currently reading Joe Nickell's Tracking The Man-Beasts: Sasquatch, Vampires, Zombies and More (Prometheus Books; 2011) and, odd coincidence, the last book of his I read happened to feature a chapter on Leaveau (that one was The Mystery Chronicles: More Real-Life X-Files), and he has a chapter entitled "On the Trail of the Loup-Garou" which features an awesome detail I have heard elsewhere before, and now think of every time I see or hear about a Loup-Garou (there's one in this comic, above).

"Loup-garous" have bats as bit as airplanes to carry them where they want to go. They make these bats drop them down your chimney, and they stand by your bed and say, "I got you now, me!" Then they bite you and suck your blood and that makes you "loup-garou."

They are also apparently terrified of frogs.

But every time I happen to read about loup garous in Louisiana in a comic book, they're always presented as just plain old werewolves. Lame. I wanna see a comic with werewolves wearing scarves and flight goggles like Snoopy on his doghouse, flying on the backs of giant bats that barrel roll them precisely into chimneys.

Loup garou, I learned from Nickell's book, is pronounced "Roo-Ga-Roo" in Louisiana. I always just pronounced it "loop-garoo" in my head, because I am American and say every word, no matter its origin, as if it were an English word.

If I was gonna try out a new #1 this week, I shoulda made it Ragemoor #1, but I didn't realize Richard Corben was drawing a comic about a monstrous living castle until I read Jog's column after getting home from the shop...

Stan Lee's Mighty 7 (Archie Comics) This is a terrible comic book, remarkably so in terms of art and production value, but it's also an engagingly weird comic, and a self-aware comic, so I think to some extent some of it's terribleness is intentional. I intend to talk about this at greater length elsewhere in the near future, but for our purposes here I would just like to note that it is not very good, despite some very good, highly-inspired moments, but is maybe worth keeping an eye on anyway. It's quite possible kids will like it, but then, I can think of dozens of better kids comics, super and not.

The above scan, by the way, is from the interesting one of the two story threads in the first issue. Based on how specific some of the character designs in that panel are, i have to assume most of those folks are actual Archie Comics employees. But if that's the case, who's the lady on the far fright, exploding out of V-neck sweater? And is she happy about being drawn like that in this comic book?

Wonder Woman #7 (DC) The latest issue introduces two more members of Brian Azzarello and Cliff Chiang's 2012 Olympian pantheon, golden gun-toting Eros and beastly, shaven gorilla Hepaestus/The Smith, whose design in particular is filligreed with multiple evocative little details to notice on rereading (like the old-school, polio-like leg braces). The plot hardly matters, so strong is the world-building the pair are doing, but basically it flows from the opening story arc, in which Wonder Woman learns about her "true" origins and gets involved in the ongoing turf wars of Greek Pantheon, of which she is now more or less a part.

There's also a reveal about the mating rituals and reproductive practices of the Amazons which, like a lot of this current take on the character, seemed off and wrong to me, but moreso in the "That's not the way I would have done it, or would have liked to seen it done" sort than the "My God, this is shockingly offensive to my aesthetic sensibilities!" sort. It works okay in this standalone take on Wonder Woman, but doesn't really mesh with what came before and, like a lot of the "New 52" I've seen, seems destined to last only as long as this particular run by these particular creators do on the character. 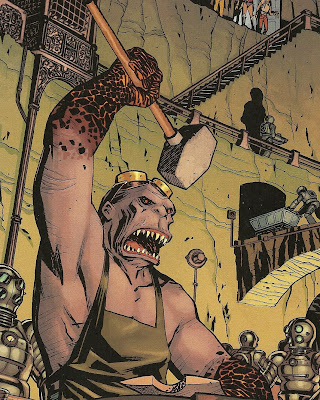 One thing that struck me while reading this issue was, as much as I've really enjoyed the previous seven issues, relatively little of that had to do with it being a Wonder Woman book, so much as an Azzarello and Chiang do Olympians in modern society book. Wonder Woman is still the star, the perspective character, and the one who defeats a monster and faces a hard truth, but she's but one of a half-dozen colorful characters, and probably the least relevant of them. Relevant to the story, that is. It's not hard to imagine a very similar story, with many of the same pleasures, having been written and drawn without her, and appearing in some other comic with a different title. Another thing I noticed this issue, perhaps because it was one in which I was so impressed by the care with which one of the new characters was designed, was that Wonder Woman's new costume seems to be working less and less for me, rather than being something I've gradually gotten used to. It's not a specatcular design in general—I don't care for the echoing Ws on her throat and breast, any more than I like when Batman or Sueprman have their symbols on their beltbuckles as well as their chests—but because the W on the choker doesn't move with her neck, instead always facing forward, sometimes when Chiang draws her with her head turned it looks like her head is swiveling around owl-like, or possessed girl-like, rather than moving naturally. I don't know, maybe that's how choker's really work on half-divine superheroines, but the visual effect is that her head swivels around her neck like the cap on a bottle.

This was probably my favorite panel. Apparently (read: "spoiler"), the Amazons are not immortal asexuals or immortal lesbians, but reproduce by boarding sailing ships every 33 years and four months, naked, sex up all the sailors, kill all the sailors they just sexed up, and then go back to Paradise Island to have babies, trading the boys for weapons. Forget all the obvious questions that raises about what makes Wonder Woman so special then and doesn't that make her seem kind of dumb for not knowing this about the closed society she spent her whole life growing up in for a second, and just look at Chiang's drawing that accompanies the "boarding sailing ships" part of the story: 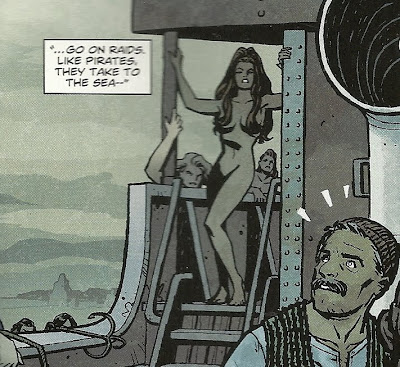 It has been a while since I saw a naked-but-still-not-that-naked woman in a DC-published story.

I'm reaching the point of wanting the DCnUniverse to get Superboy-punched out of existence.