So why is Green Arrow called "Green Arrow" anyway...?

Earlier in the week ComicsAlliance ran a piece that revealed an image from the in-production CW television show based on the Green Arrow comic book character. The name of the show isn't going to follow the normal naming conventions for television shows and films based on comic book superheroes and be called Green Arrow, however, but will instead be called Arrow.

It's not clear to me if the arrow-shooting vigilante identity of protagonist Oliver Queen will still be called "Green Arrow," or if he, like the show, will go by "Arrow" or "The Arrow." That strikes me as kind of silly, akin to a Batman TV renaming the character "The Bat" or a Black Lightning show calling its star "Lightning."

Surely Green Arrow is no more than a C-list super-character in mass consciousness, but the character has been featured in cartoons like Justice League Unlimited, The Batman, Batman: The Brave and The Bold and Young Justice, in addition to being a fairly regular supporting character in the CW's own Smallville live-action superhero show. And he has been appearing in comic books off and on for a little over 70 years now. He even had a small role in The Dark Knight Returns, one of the most widely-read and discussed superhero narratives of all time— Why bother developing a show around a pre-existing, thoroughly market-tested character if you're going to go out of your way to downplay the built-in name recognition? 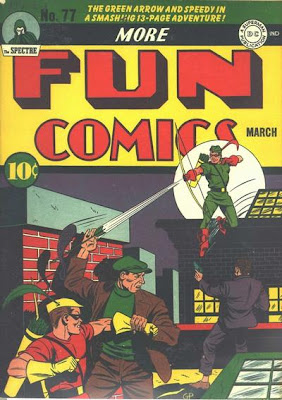 So I got to thinking: Why is Green Arrow is named Green Arrow in the first place? Well, he wears green and he shoots arrows, so it's a pretty good name descriptively, certainly as good as Batman or Superman in that respect, but how did his creators Mort Weisinger and George Papp arrive at that name?

Colors were, of course, a go-to naming convention among the Golden Age superheroes and the pulp heros that prefigured them. Just as adding almost anything as a prefix to the word "man" could get you something that sounds like a superhero name, so too could adding just about any noun after any good, strong color, preferably black, red or blue, although even green's not that unusual choice. Green Arrow shared his color with almost a half-dozen other costumed crimefighters, all of whom were wearing it before him: Green Hornet (1936), Green Mask (1939) and Green Lantern, Green Giant and Green Lama (1940).

So it's possible young boys in the late 30s and early 40s were just nuts about the color green.

It's also possible that Weisinger could have lifted it from Edgar Wallace's 1923 novel The Green Archer, which featured a mysterious, Robin Hood-like character, or, more likely still, from the 1925 silent film serial based on that, or the popular 1940 film serial. 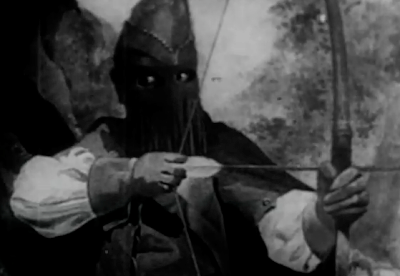 Wherever it came from, the color half of the name might have been necessary in part to distinguish the battling bowman from the cover of More Fun Comics from his immediate predecessor, Fawcett Comics' Golden Arrow, who debuted in the same 1940 issue of Whiz Comics that Captain Marvel did. 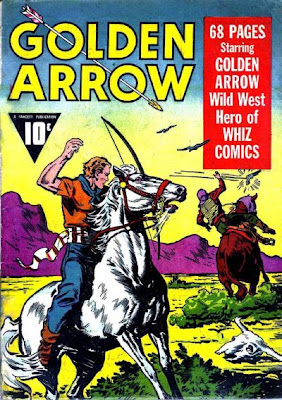 Or from the earliest comic book crimefighting archer I know of, The Arrow, from Centaur Publications' Funny Pages. 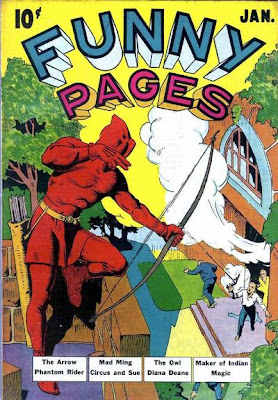 I'm not an entertainment lawyer or copyright law expert (er, you didn't think I was, did you?), but as a Fawcett character, Golden Arrow should no belong to DC Comics, and thus be part of the library of characters that Warner Bros. owns. And The Arrow lapsed into public domain, with companies as various as Malibu and Dynamite attempting revivals. I'm not sure if Dynamite could do anything to stop a CW show called Arrow and/or featuring a hooded super-archer character by that name.

But all of this is just thinking in terms of why we call the character Green Arrow "Green Arrow" in the real world. In Green Arrow's world, or at least the world of the television show that would feature him, is there a reason he might go by Green Arrow instead of just Arrow...?

I'm sure Green Arrow the comics character doesn't exist in the reality of the TV show, but The Green Archer the novel and/or serials probably do, so he might be inspired to name himself after those, but, if that was the case, he could just go with Green Archer, instead of Green Arrow.

No, I can't really think of a reason why a character might name himself Green Arrow within the context of his own fictional reality. Generally, it's "the press" that comes up with the superhero's codename. Rather than thinking about such things, the hero is out there fighting crime, unconcerned with what the public thinks. They're interest lies in justice, not PR.

So, if the press were to discover a guy dressed in green, fighting crime with a bow and arrows, would they call him "Arrow" or "Green Arrow"...?

I think it's fairly safe to say they would use neither, calling him instead "a real-life Robin Hood."

I suppose we'll have to wait and see if the show ever gets made to see what name they give Queen's crimefighter identity, and what in-story rationale they come up with to justify the choice. I'm still curious about why the producers are opting for that title instead of Green Arrow though...
Posted by Caleb at 4:31 PM

I share your confusion. Presumably, they are using the character, so presumably you would think they would want FANS of that character to watch the show. Unless they are trying to appeal to a wider audience, but why a "wider audience" would watch a show called Arrow also escapes me.

Although I DO watch a show called Archer. No arrows in it, but it IS hilarious.

here's a reason to use the color as part of the name, actually two: I hear the show will play up the characters wealth, so perhaps green = money, as if, this rich guilty kid us using his Green to focus like an Arrow on crime?
And/or, perhaps, down the road, they'll play up his liberal/environmental aspects?

Hey Caleb, I think there is a fairly distinct difference here between the slimming down of Amanda Waller and Etta Candy and I'm not sure I'd say "they are all in the same ballpark." Etta as you show her and you discuss hasn't been seen since the Golden Age of comics. The Etta Candy who appeared post-crisis was shown with a very different physique.
http://media.comicvine.com/upl... No question there is a lack of diversity in the size of female characters in comics (and color) but in this case the difference isn't nearly as drastic as Waller and has about 25 years of stories behind it. And as you said they also "sexed" up Waller and deaged her (although Etta looks young here as well).

And as a quick clarification, I am the only person who writes for DC Women Kicking Ass unless there is another byline.