Marvel's June previews reveiwed...plus, an important update on my health!

Hi there, readers! How are you? I am in a fine mood, because I am not dead, and I was pretty sure I was dead or dying at various points this weekend, as I had a fever of 100 and a billion and threw up every ounce of water I drank...sometimes within minutes of drinking it! Yes, I was a sick as I can ever remember being, and spent all of Saturday night and parts of the last few days alternately pacing my apartment, curled up in the fetal position and seeking out new places to sleep that might be more comfortable than my bed (The corner of the bathroom? The bathtub? This threshold here?).

Anyway, that is why I did not post Saturday, or Sunday or Monday. Oh wait, I did post on Sunday? Jeez, I could barely think on Sunday, what the hell did I write? Was it all bargaining with God, and feverish rantings at hallucinations and requests for someone, anyone, to just bring me some goddam apple juice?

Oh, no, it looks like it was just my usual links post. You know what that means? Either I am such a professional writer that I was able to comport myself and deliver a post of my usual quality despite the fact that I was pretty much completely insane with fever while writing, or I am such a poor writer it hardly matters if I am in my right mind when I write or not, as it all just comes out as the verbal vomit of a sickened brain.

Or it could just mean that I write the bulk of those link posts earlier throughout the week, and so I was thus able to simply polish a few of 'em up and post them all on Sunday and then flee my laptop to collapse weeping on the bathroom floor again.

It certainly means at least one of those three things.

Anyway, I'm going to ease back into post-illness blogging with an easy one: The regularly-scheduled monthly looksee at Marvel's solicitations. You can read them at ComicsAlliance if you like, or Comic Book Resources. I don't care.

I would like to take this opportunity to remind you all to wash your hands like, a million times a days. And never touch one another. Ever. For any reason. And to make sure you always have lots of fluids and, I don't know, take vitamins and drink orange juice or something? Because this flu was hell—either a more powerful strain than usual, or else I haven't had the flu in so long I forgot what it feels like and am just being a big baby.

And speaking of me being a big baby, let's see what Marvel has for me to whine about this month... 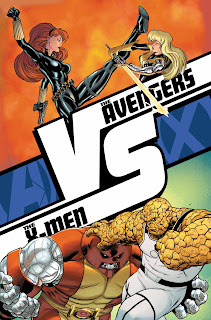 See, these fights all seem easy to call. Of course, I thought Spidey would take out Colossus...y in the previous issue, so what do I know?

Say, does anyone call Colossus "Juglossus" when he's got his Juggernaut's hat on...? 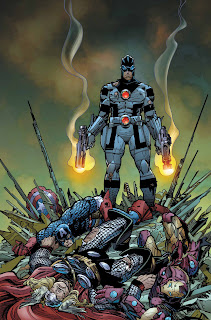 
CAPTAIN AMERICA AND…IRON MAN #633
CULLEN BUNN (w) • BARRY KITSON (a)
Cover by KALMAN ANDRASOFSZKY
• Captain America and Iron Man head to Madripoor for a technology expo! What could possibly go wrong? Everything! That’s what!
• Especially when Batroc’s Brigade shows up and a technological nightmare threatens to brings the world to its knees!
32 PGS./Rated T …$2.99

I'll have dropped this title by the time this issue ships—I'm gonna try the first issue of it as Captain America And Hawkeye since it involves the fighting of dinosaurs—but I have to admit I am attracted to the phrase "Batroc's Brigade."

The bad thing about trade-waiting certain runs of certain Marvel comics is they change titles so frequently, and the numbering so randomly, that once you go away for a year or more, it can be pretty hard to figure out how to even go about reading a particular run on a particular title/franchise by particular creators.

Like, I want to eventually finish reading the Pak/Van Lente Hercules comics, but I'm not sure where that story went after the Incredible Hercules title got canceled (into at least three miniseries and a new ongoing, I think) or how they eventually get collected. I similarly want to someday read all of Parker's Hulk and Thunderbolts books but...Marvel doesn't make it easy. I hope Parker has a handy checklist on his website or something when he ends his run on those titles...


DEFENDERS BY MATT FRACTION VOL. 1 TPB
Written by MATT FRACTION
Penciled by TERRY DODSON, MICHAEL LARK, MITCH BREITWEISER & VICTOR IBANEZ
Cover by TERRY DODSON
The last line of defense against the forces of the unknown! Spinning out of the stunning ending of FEAR ITSELF, the final member of the Worthy is on a global rampage, and everyone’s favorite Marvel misfits must band together to solve a mysterious conspiracy deep at the heart of the Marvel Universe! What is the secret of Wundagore Mountain? Matt Fraction (FEAR ITSELF, THE MIGHTY THOR, INVINCIBLE IRON MAN) reteams with UNCANNY X-MEN cohort Terry Dodson (SENSATIONAL SPIDER-MAN) to relaunch Marvel’s mightiest non-team: the all-new, all-different, all-dynamic Defenders! Collecting DEFENDERS (2012) #1-6, and material from FEAR ITSELF #7 and POINT ONE.
160 PGS./Rated T+ …$19.99 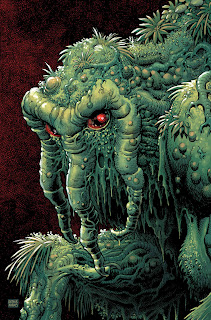 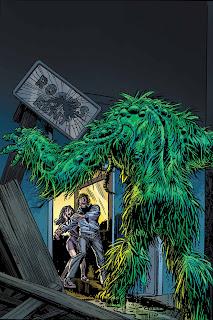 INFERNAL MAN-THING #1 (of 3)
STEVE GERBER (w) • KEVIN NOWLAN (a)
Cover by Art Adams
Variant covers by GIL KANE & KEVIN NOWLAN
• STEVE GERBER’S FINAL MAN-THING STORY!
• What is the mystery behind the “Screenplay of the Living Dead Man”?
• The story no one thought existed!!!
• NO ADS! BONUS CONTENT!
32 PGS./Rated T+ …$3.99

I'll be trade-waiting this, due to both the price—although...is that right? No ads, but still 32 pages for $3.99? Or is it 22 pages of story and "bonus content" means house ads disguised as content?—and the fact that it has at least two really nice covers, and I'd hate to choose between Kane's and Adams' Man-Things.

Anyway, just wanted to draw attention to this, a good-looking comic book. I hope the bonus content, or an introduction in the eventual trade, explains why marvel had this script for so long but didn't have it published as a comic until now. This is a comic I have questions about.

That is a funny title.

I may be alone in this, but I hope Hope Summers' destiny is to plunge her fist into the Phoenix Force and henceforth go by the codename Phoenix Fist.

Uh...that's it? There's not even a cover image; that is literally all of the information Marvel released regarding this book. So all I know is that it's written by a talented writer whose work I sort of loathe at this point in my reading-his-comics life, it's drawn by an incredibly talented artist I really like, it's overpriced, it will have lots of variants and it will probably be pretty Spider-Man related...?


SCARLET SPIDER #6
CHRISTOPHER YOST (w) • RYAN STEGMAN (a&C)
• The book everyone is talking about!
• Kaine goes from hunter to hunted as the daughter of KRAVEN THE HUNTER takes on the Scarlet Spider!
• From the pages of SPIDER-ISLAND, Madame Web crashes into Kaine’s life – with dark visions of his road ahead!
32 PGS./Rated T+ …$2.99

I'm not trying to be contrary or anything, but I have not actually heard anyone talk about this book anywhere. 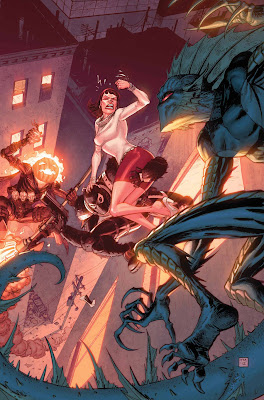 I don't necessarily care for all the designs, but I really like this Tony Moore cover for Venom #19. I especially like the limbs of the Pumpkin Goblin or Hemoglobin or Jackogoblin or whatever that guy's name is.

Speaking of Spider-Man villain's I'm obviously not terribly familiar with, who is that mouthless Lizard-like guy? Are Venom's villains all the knock-off versions of Spidey villains?
Posted by Caleb at 5:23 PM

Isn't the mouthless spider villain death adder (or something-adder) from the Serpent Society, who menaced Captain American back in the Grunewald days?

Isn't the mouthless spider villain death adder (or something-adder) from the Serpent Society, who menaced Captain American back in the Grunewald days?

So on that Man-Thing book, who exactly gets paid for it since Gerber's dead and all? Or did he already get paid back when he turned it in?

Oh and all of Parker's "Thunderbolts" run is just under the one title. No title changes or anything...

House to astonish did a review of the first scarlet spider when it came out. ( they sortOf liked it)

I'm glad that you're not dead, Caleb.