Ads of note from this week's Marvel comics: 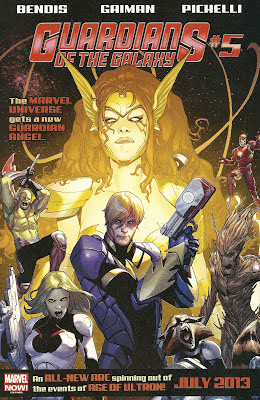 Well, I had read the reports, I had seen the character design and I had read the solicitations, and now here's the house ad indicating that yes, this is really a thing that is happening: The hellspawn-hunting angel "Angela" character that Neil Gaiman wrote in an issue of Spawn when I was a freshman in high school that the writer and Spawn creator and artist Todd McFarlane fought about in court forever really is joining the Marvel Universe some reason I can't even begin to imagine. Look, there she is! Appearing in a random issue of a Guardians of the Galaxy comic book, for some reason that probably makes sense to someone somewhere!

As hard as it is for me to wrap my head around this being a thing that is happening, it's still harder to imagine Neil Gaiman and Brian Michael Bendis co-writing a comic book together and harder still to imagine it's Bendis that gets top billing.

We don't get to see much of Angela in this image, but I'm struck by how familiar she looks....and it can't just be because I read one comic with her in it when I was 14. Her top looks awfully Wonder Woman-esque in this particular image... 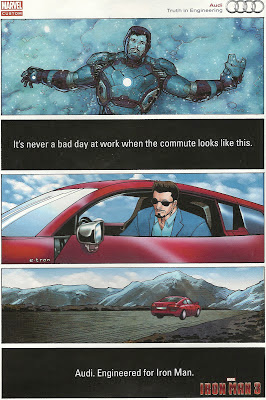 This is another Marvel/sponsor fusion ad I just don't get. There's an image of Tony Stark in a busted-up Iron Man suit in a bank of snow, followed by something about how great your job is when you drive an Audi, and then a couple of drawings of a car.

Is the implication that commuting to work in a suit of Iron Man armor sucks? Because that would actually probably be pretty awesome (The image is a drawing of a scene from the film, however, after Iron Man crash lands, having just escaped a massive terrorist attack that leveled his house). And that driving an Audi is better? Why not just lose the top image, and have pictures of Tony Stark driving his Audi around...?

I'm not sure but I suppose it's possible those bottom two images are also scenes from the film—I remember the end of the film involving Tony Stark getting into a car and driving away, although I don't remember the make or model of the car.

But most perplexing of all is, if you're going to use scenes from the film anyway, why not just use the stills from the film, rather than having an artist poorly re-draw them? Like, that second image—I think Stark is getting into the car, and the door is thus slightly ajar, but because of the way the image is cropped, it also looks like maybe he's just leaning his head out the window like a dog while he drives...?

She looks like Wondy in that pic? Did not notice.

Ahh, Angela. Merely the worst character Neil Gaiman's ever come up with. Glad to have her back.

Since you haven't read Age of Ultron yet, I will tell you that the last issue is nothing more but a huge ad for upcoming story lines. Angela appears at the end and literally the next page has that Guardians of the Galaxy ad featuring Angela. Marvel is certainly more audacious with their advertising.