Sorry that this post about Marvel's September solicitations, which were actually released last week, is so late. Or, given that those solicitations are for books that aren't coming out for three more months, perhaps it's still early. At any rate, for the full solicits, I suggest you check them out on Comic Book Resources (although, at this point, I'm sure you already have if you were at all interested).

Otherwise, you need only proceed to see what jumped out at me as noteworthy this month... 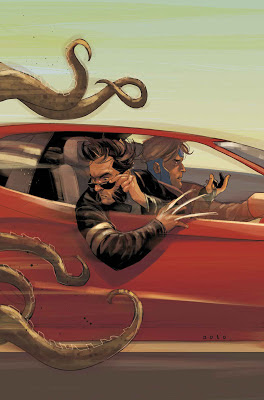 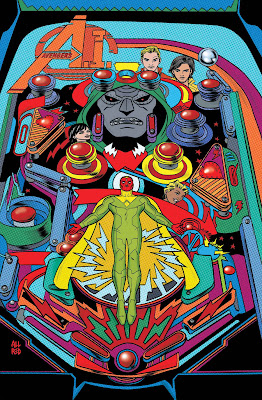 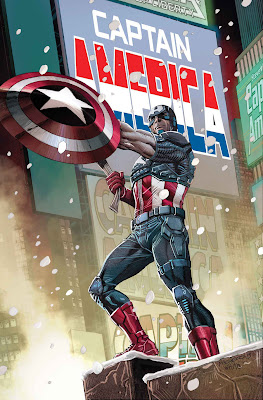 I was going to say something about Captain America apparently getting a short-sleeved costume to wear in the summer, but I see it's snowing on the actual image. 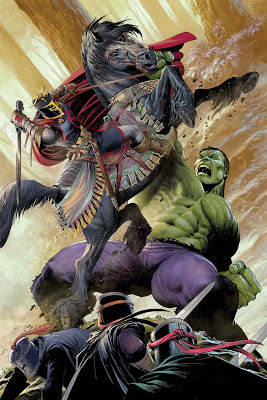 Oh man, I don't know which artist is responsible for that cover, but damn, that's an awesome cover. 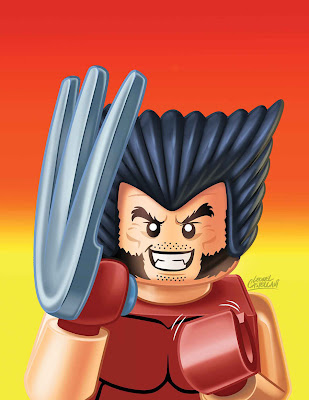 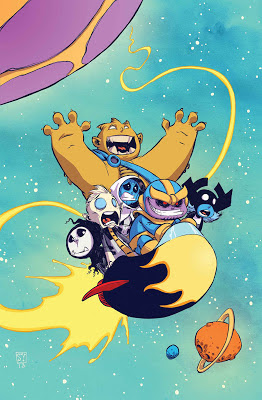 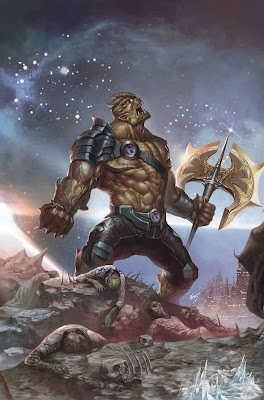 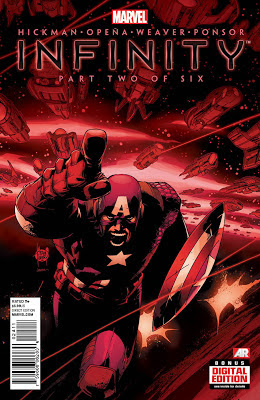 Weird that I can read the solicit for this comic, which I guess is going to be Marvel's next Age of Ultron-scope crossover/event series, and still not have any idea what the hell the comic is actually about. I guess The Inhumans and Thanos are in it? And I know the creators?

Here's part of the solicit for #3, which is also do out in September, and also doesn't clear up anything about, oh, say, the plot of the event book:

• Prison break.
• Stealing a worldkiller.
• The fall of Attilan.

I don't normally post all of the variant covers for a comic, as I find variants so objectionable, but I thought the variants for #2 were of interest simply because of how greatly the images vary, with two looking extremely child-friendly, one looking kind of like a generic superhero cover, and the other looking like something for twenty-something gamers or fantasy enthusiasts. 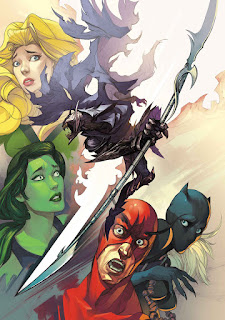 INFINITY: THE HUNT #1 (of 4)
MATT KINDT (W) • STEVEN SANDERS (A)
Cover by SLAVA PASARIN
INFINITY TIE-IN!
• Hank Pym, Wolverine, and She-Hulk bring the students of the Marvel Universe together to announce a new CONTEST OF CHAMPIONS!
• This CONTEST OF CHAMPIONS pits the super students of schools all over the Marvel U (including some you’ve never seen before) against each other.
• However, the Contest is interrupted when Thanos’ forces descend on Earth. What do they have to do with the young heroes?
32 PGS./Rated T+ …$3.99

Woah, woah, woah—so Matt Kindt is still writing and drawing his own idiosyncratic graphic novels like Red Handed: The Fine Art of Strange Crimes, while also writing for DC Comics and writing for Marvel comics...? Is he living the dream? Well, if your dream is to make your own comics while getting paid big bucks to write superheroes for the Big Two then yes, Matt Kindt is living the dream. 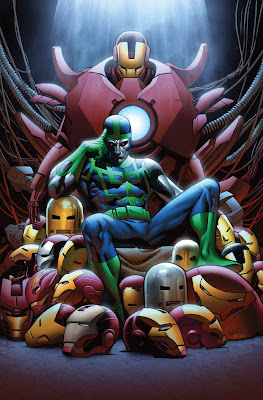 Oh man, I hate to be in the position to have to say something nice about Greg Land's work, but I do kinda like this cover of his... 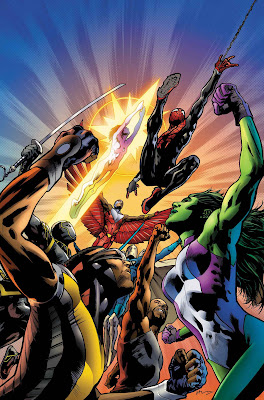 MIGHTY AVENGERS #1
AL EWING (W) • GREG LAND (A/C)
...
INFINITY TIE-IN! new ongoing series!
FROM THE BATTLEFIELDS OF INFINITY COMES THE MIGHTY AVENGERS!
• The Avengers are light-years away in space, contending with the Builders! Thanos’ marauders ransack the Earth, doing as they please! Who will stand in defense of mankind?
• Luke Cage! The Superior Spider-Man! Spectrum! The White Tiger! Power Man! And a mysterious figure in an ill-fitting Spider-Man Halloween costume! These unlikely heroes must assemble when no one else can—against the unrelenting attack of Proxima Midnight!
32 PGS./Rated T+ …$3.99

Well, the last thing we need is another Avengers title, and this one seems to be somewhat taking the place of a previous incarnation of the New Avengers title, back when that included street-level heroes like Luke Cage and Spidey while The Mighty Avengers was used for the real, official Avengers team, which is now appearing in The Avengers, while the name New Avengers is currently being used for a title featuring The Illuminati (Sigh. Keeping up with comics is so hard...!)

I like the idea of a line-up with so few white guys and so many characters of color (brown, black, green), I think I preferred the line-up to the "Black Avengers" Reginald Hudlin teased during his Black Panther run (Luke Cage, Blade, Brother Voodoo, Storm, The Panther, Goliath and...were War Machine and The Falcon in there? I think they might have been), or even that of the short-lived title The Crew (Junta, Justice, White Tiger and War Machine).

I'd kinda like more information about this—there are two Spider-Men in it?—but I guess just knowing that Greg Land is drawing it is all the information I really need to know. This book is definitely not for me. 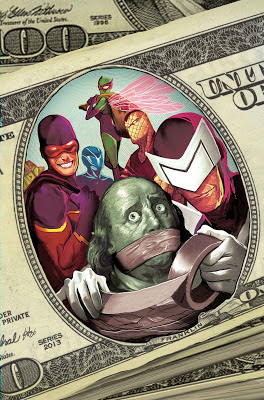 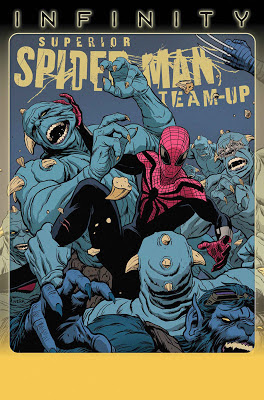 That's Paolo Rivera's cover for Superior Spider-Man Team-Up #3 or #4, which gives a pretty decent look of what I guess is The Superior Spider-Man's new costume; I think it's inferior. I liked how he was pretty much just wearing Spider-Man's costume, only with pointier finger tips and slightly different eyes. The palms on this one look kinda cool, but overall it looks too much like the costume the clone Spidey used to wear (or was that the clone Spidey...?) for my comfort. 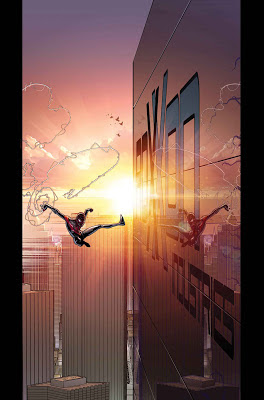 David Marquez's cover for Ultimate Spider-Man is pretty cool. Particularly because it looks like he's going to totally crash into that building. 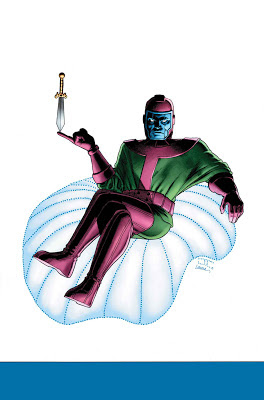 I give up, John Cassaday, what is Kang lounging on...? 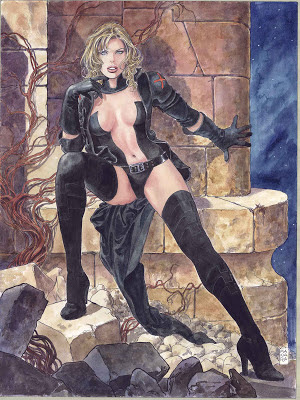 Nothing makes a dumb, unrealistic costume looker dumber, less realistic than when a good artist tries to draw it, as Milo Manara does to what is apparently Emma Frost's new look on this cover of Uncanny X-Men, which are involved in some big "Battle of The Atom" event spearheaded by Brian Michael Bendis this month, which means I'm no longer sure which is the big crossover event/series of September: Infinity or Battle of The Atom. Or are they just overlapping now...? 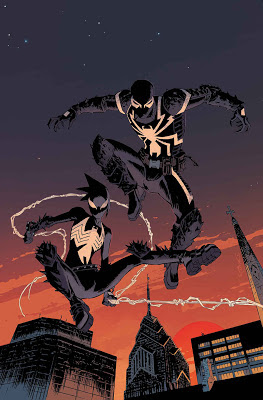 What? Who killed Daimon Hellstrom, Son of Satan? Hopefully no one!

I like Declan Shalvey.
Posted by Caleb at 6:18 PM

Didn't Attilan already fall? Like wasn't the US govt' blowing it up or something the reason the Inhumans left and took over the Kree Empire? I mean I know that ended somewhere off page when Hickman brought back the Supreme Intelligence and Black Bolt somewhere and somehow. So maybe Attilan was rebuilt (and wasn't the moon one a rebuild also from early FF stuff?) off panel as well...

So that it could be knocked down again. I guess...

Anyway thats a lot of pretty sweet covers for a multitude of books that story-wise seem to have zero appeal to me...

Kang is sitting on a futuristic seat that he used in his first appearance.