This week's ads of note

What? A reality show?! No Mr. The Rock! Don't do a reality show! You're better than that!

Why are you doing this? Surely there are sequels to Journey 2 The Mysterious Island and G.I. Joe: Retalliation and a Fast and the Furious 7 to make, right? Or hey, I have a script for a comic book miniseries about a dinosaur-fighting barbarian that could be retooled into a script for a The Rock vehicle pretty easily...! Just don't do reality television! Surely it hasn't come to this already, has it...? 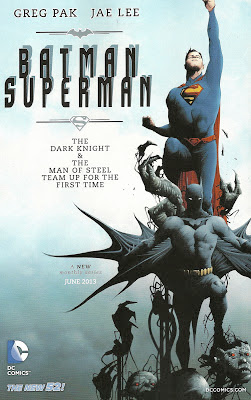 I'm pretty curious about this title for three reasons.

1.) Greg Pak is a writer who has done a lot of work for Marvel Comics, making his debut at DC Comics (as far as I know) at a time when DC Comics seems to be somewhere between dismissive and monstrously hostile towards its creative talent, perhaps especially its writers (based on what at least a half-dozen or so writers have said about their time there in the last year or so, and based on what one can see from the vantage point of not being within the company, but watching its moves from outside.

2.) The series is being pitched as a Greg Pak-written, Jae Lee-drawn one, but it's hard to imagine Lee staying on a monthly schedule for too long. The previous iteration of this series changed artists every story arc, and, after the first few arcs, even the writer changed every arc.

3.) It should be interesting to see how Pak handles New 52 continuity. Even the scant info given in this ad seems suspect, based on the first arc of Justice League, in which Batman and Superman meet an team-up for the first time.

The individual continuity of those two characters seem pretty messed-up and out-of-synch, so a series devoted to their relationship seems to be handicapping itself right at the conceptual level. 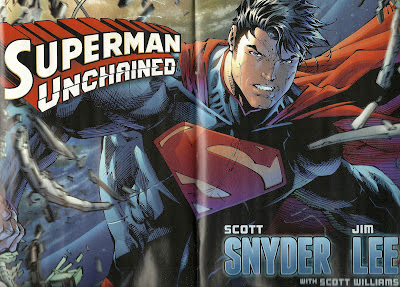 Here's a bad scan of the two-page ad they're running for the upcoming tertiary Superman title, the bafflingly entitled Superman Unchained by Scott Snyder and Jim Lee.

I found it interesting that they devoted only two pages to hyping this new series, versus the six pages devoted to hyping the new Action Comics creative team of writer Andy Diggle and artist Tony Daniel, which ended up only lasting a single issue.

I wonder if it's simply a matter of a Snyder and Lee collaboration selling itself in a way that a Diggle and Daiel one doesn't, or if their ad department got skittish with the results of that last effort to sell Superman comics, I figured if they only used two pages to advertise this one, it'd last at least three issue...
Posted by Caleb at 5:11 AM

I wonder what Snyder will dream up for Supes...

Jae Lee is a great artist, but you're right. There's no way he keeps to any kind of schedule.