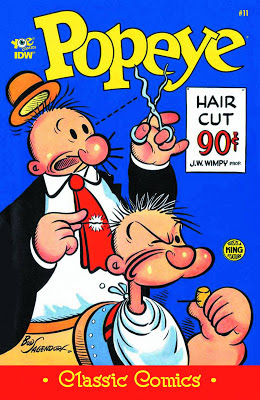 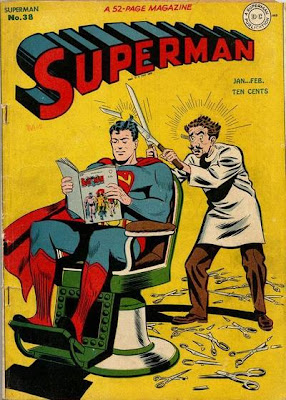 Oh yeah; Superman's barber doesn't have much better luck cutting indestructible hair. (For what it's worth, the Superman cover predates the Popeye one by a couple of years). 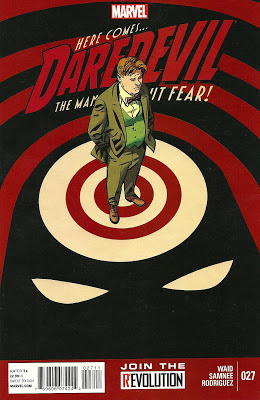 Daredevil #27 (Marvel Entertainment) Okay, now this, this is definitely the climax of Mark Waid's entire run on the book to date, and the completion of what turned out to be a 27-issue (or 27.1-issue, I guess) story arc, pitting Daredevil against his archenemy in a brand new way (That's not giving the villain away or anything, is it? I mean he's right there on the cover: Space Ghost). It's really good. Some additional thoughts...?

—That was nice of Superior Spider-Man (that is, Doctor Octopus-in-Spider-Man's-body), to chip in and help Daredevil out like that.

—It's kinda weird that DD was able to call in so many Avengers to help protect his loved ones, but couldn't have, like, Iron Man and Thor show up to help him take down Ikari though, isn't it?

—Samnee knocked this one out of the park. I mean, he usually does, but he knocked it even further out of the park than usual. I loved the graceful, exacting illustration of the ninja fight scenes, like that panel where Ikari slips his foot behind DD's in order to knock his ass down? Brilliant stuff.

—Literally one hundred barrels containing the toxic ooze that transformed Matt Murdock into Daredevil (and a rat and four pet turtles into Splinter and the Teenage Mutant Ninja Turtles!) are in a building that collapses in this story. Imagine how many rats, pigeons, feral cats and cockroaches are gonna mutate now!

—I know Bullseye is supposed to be an evil son of a bitch and all, but man, I kinda feel for the guy at this point. He's essentially the guy from the Metallica "One" video, which used to scare the bejeezus out of me whenever I contemplated the fate of that poor devil SOS-ing "kill me" over and over again with his head on his pillow. Sheesh.

—This would actually be a good place for Waid to take his bow and leave the title. I'm glad he's not though. 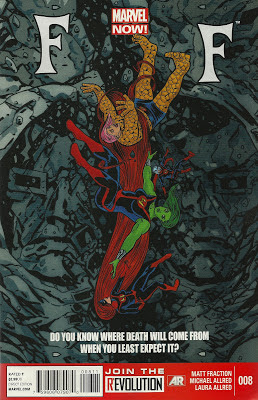 FF #8 (Marvel) Is this the first comic book with a Mad magazine-style fold-in for a cover...? (How has DC not done an entire month of 52 of those covers yet?) There are a pair of battles in this issue, one featuring the Future Foundation kids vs. two of their number, until Dragon Man breaks it up, and the other featuring Medusa and a pants-less She-Hulk, until Ant Man breaks it up. Plus! Doctor Doom, saying "Impudent whelp!" and "Pah!" and other Doomisms.

I'm not 100% sure, but I think the Allreds do the best Doom of anyone since Kirby himself...

Green Team: Teen Trillionaires #2 (DC Comics) Uh-oh. This book seems to have taken a turn for the not-very-interesting very, very fast. In this issue, we learn a little bit more about the various characters and their various relationships, and that Commodores over-arching ambition is to be a superhero, which so far has consisted of funding some sort of knock-off Iron Man suits which doesn't seem quite right. I mean, Batman's only a billionaire, and look how how much cool superhero stuff he has! Even if Commodore lacks the drive to train and become a psychotic super-ninja detective, he should at least be able to build all kinds of cool crime-fighting robots and Whirlybats and such-like, right...?

There's a few panels where the teens talk to each other in texting abbreviations, which was so irritating I wanted to punch this comic book in its face, except it didn't have a face, because it was a comic book.

The sole redeeming quality was probably when Mo was showing Commodore his collection of superhero paraphernalia, and someone refers to it as "geek stuff," and, in the background, we see a case containing the costume of Brother Power The Geek (or maybe it actually is Brother Power the Geek, given that he's just a mannequin anyway...?). That was kinda funny (Holy shit, you guys! In the New 52, there's no Donna Troy and no Wally West and no Stephanie Brown and no Elongated Man, but there is a Brother Power The Geek!)

I really like the bodies of work produced by Art Baltazar and Franco and Ig Guara, and was planning on sticking this out until the eighth issue or so (when it will almost certainly be canceled), but man, I don't know if I can stick around even that long if the next issue's gonna be much like this one.... 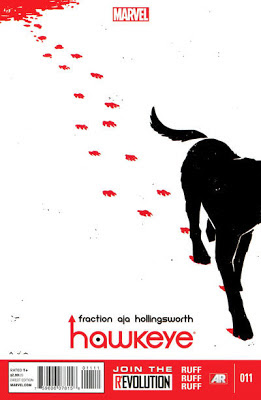 Hawkeye #11 (Marvel) This is a done-in-one issue by the regular creative team of Matt Fraction and David Aja (with Chris Eliopoulos getting a "production" credit, likely for some role in all of the diagrams and symbols used in this issue). It's star is Arrow, aka Lucky, aka Pizza Dog, the dog that Hawkeye adopted from the be-tracksuited thugs who say "bro" in the first issue of the series.

And, most importantly, it's told entirely from the perspective of the dog. And it's awesome.

Fraction and Aja use that old Gary Larson gag about what we say to dogs versus what they hear... 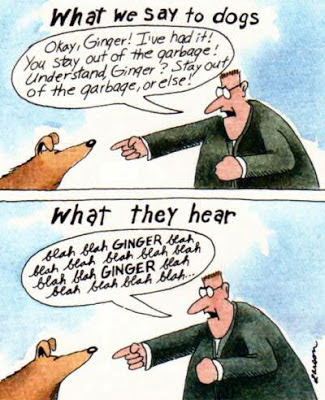 ...to communicate a bit of Lucky's understanding of what's going on between the Hawkeyes (they're fighting about something).

Much of the information is conveyed visually, and presented as spider-web like charts of associations the dog has for various characters and/or locations, with little pictograms representing smells and memories of the characters. He walks around, discovers a body, discovers a pizza in the garbage, has a few run-ins with some bad guys, gets in a brutal fight and ultimately endures a big, life-changing event, along with one of the Hawkeyes.

It's a really different, really fun book and, compared to what you usually find in books starring Hawkeye, actually sort of brilliant.

Star Wars #6 (Dark Horse Comics) Aaaaaaaaand I'm officially bored with this series. It's still of relatively high quality—it's well-written, the art is nice—and the premise is pretty much ideally suited for the casual Star Wars fan who also reads comics (the only better-suited titles being Jeffrey Brown's Vader's Little Princess and Darth Vader and Son, and the old Star Wars Tales anthologies from Dark Horse), but since the first issue, there doesn't seem to be a whole lot of forward progress in each issue, and various sub-plots and storylines all but disappear (Darth Vader, for example, gets one panel here; Chewbacca another; Han Solo one of his own).

Writer Brian Wood is clearly telling the story more like a novel than a serially-published comic book, and that's a perfectly legitimate way to tell the story. I'll just read it in graphic novel some day, rather than in monthly, 22-page installments. 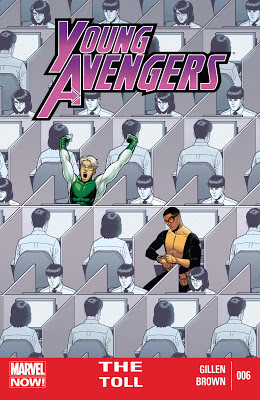 Young Avengers #6 (Marvel) Hey, so have you been wondering what some of the other Young Avengers have been up to, since Young Avengers relaunched, sans Speed, Patriot, Stature (I think she's pretty dead at the moment...?) and Vision (I think he maybe grew up into the old, slightly more boring version of himself...?). I have.

Well, in this issue regular writer Kieron Gillen and guest artist Kate Brown (who is a hell of an artist, and who I hope will be the guest artist any time regular artists Jamie McKelvie and Mike Norton can't draw an issue, tells us what Speed has been up to. He's gotten a ten-minute-a-day job at some sort of super corporation of some kind, assembling super-widgets (a week's worth of work for people who don't move at super-speed. There he befriends former (?) mutant Prodigy, who does some sort of super-consulting customer service, with people calling a hotline and asking him how to defuse alien weapons or fight Elektra or whatever.

In other words, this is a sort of "Meanwhile..." issue in which we check in with a character, and meet another (or check in with two characters, if you already knew who Prodigy was; I did not), and see what a couple of young super-people do when they get jobs.

It's smart and witty, as most of the previous five issues were, and it's incredible well-drawn (with nice, animation cel-like coloring from either Brown herself or maybe the person credited with "production). The ending is kind of confusing, presumably on purpose though, as a mysterious assailant does something mysterious to one of our two protagonists.
Posted by Caleb at 6:06 PM

Ok, I really really do have to start picking up Daredevil now.

But yes, Hawkeye and Young Avengers are fabulous.

Green Team is something of a disappointment. Ig Guara's art is fine, but mediocre and does nothing to help the book's major issue, which is the utter lack of humor and joy. Disappointing from the guys who did Superman Family Adventures and Tiny Titans.