Well, I didn't go to the shop at all last week, as there were only two books I read serially released then. And there were only three released this week, but I went anyway, because I missed the comic shop experience. I suppose I should have waited another week or three, however, as my "haul" is a pretty paltry one, and likely of little interest to most of you. But I'm gonna blog about it anyway, dammit, because this is what I do before bedtime on Wednesday nights... 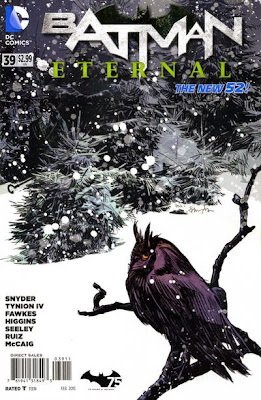 Batman Eternal #39 (DC Comics) The weekly, year-long Batman series concludes in March with #52, and while that still leaves us with a lot of Batman Eternal to go—a good 240-pages worth of comics—co-plotters Scott Snyder and James Tynion have yet to reveal who the mastermind behind the extremely coordinated, byzantine attacks on Gotham City is yet. Actually, they've revealed the person like three times now, but each time it turns out there was someone behind that someone. 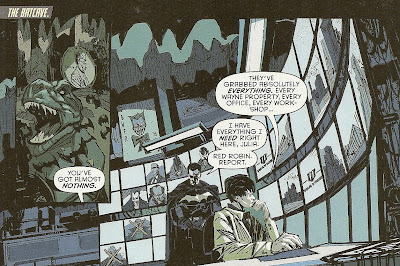 Determining the identity of his actual foe becomes Batman's focus in this issue. On the very first page, we see a list of suspects on some of the monitors behind him. They're small and Felix Ruiz's art is rough, but I imagine they are, left to right, top to bottom, Lex Luthor, The Wrath (that's my best guess for that guy, who also looks a bit like Black Orchid), Dr. Hurt/Thomas Wayne/The Devil, The Joker and Ra's al Ghul.

All good guesses for a character inside the book to make, but it shouldn't be any of them, playing by the rules of mystery fiction. We're 39/52 of the way through this story; certainly the bad guy has to have already appeared in some capacity, right? Is the owl on the cover a clue? Certainly Earth-3's Owlman and Batman's maybe-brother from Snyder's Court of Owls stories in Batman would be good guesses, but there's been no indication within the comic itself up until this point to suggest either.

I am downright stymied at this point, without so much as a decent guess. Whoever it is would have to have some serious occult powers or connections, if the business at Arkham Asylum was related to all the other stuff in the series, as would seem to be the case.

In this issue, Batman tracks down The Riddler, who claims to know who the real enemy is—to my relief, it's not The Riddler, who Snyder just got down telling a massive epic storyline about—and to reveal it to Batman in a bit of cryptic dialogue. Here: 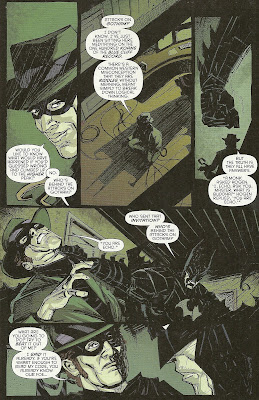 Assuming the name isn't actually "Echo" and it's not one of these guys, then The Riddler seems to be saying the identity of the attacks is "You are Echo," or "Your echo;" that is, Batman's echo.

And who is Batman's echo? I don't know. If I've got that right—and I likely do not—then to answer the next part, you have to get kind of existential, as the person would have to be a metaphorical echo of Batman.

Is it an evil opposite, like Man-Bat or The Wrath or Owlman or his brother? None of them have appeared in the book so far, and thus none have been definitively eliminated the way, say, Carmine Falcone or Hush have been, but, playing by the rules, none of them can really be the mastermind without betraying the reader, either.

Or is Batman's echo more of a pale imitation, like a former sidekick or lieutenant Batman of some sort? In that case, Batwoman Kate Kane is probably a good bet, as she's 1.) Appeared in the book, 2.) Her title is about to be canceled, whereas Batgirl, Red Hood, Red Robin and Dick Grayson all have titles to support, and 3.) She's someone's daughter...The Riddler alludes to daughters in this, and Batman acknowledges there's something to that (Think of all the father/daughter pairs in the book so far: Alfred Pennyworth/Julia Pennyworth, "The Lion"/Catwoman, Cluemaster/Spoiler...and then there's The Joker's Daughter). She's disappeared from the book for so long though, without so much as a check-in, that she seems extremely unlikely...not to mention it ruins a great character by flipping her into the heel camp. (Does Batman have a daughter? Because that wouldn't be a bad guess, except I can't imagine they'd give Bruce Wayne a second child he never knew about who was artificially, rapidly aged...and it'd be pretty crummy of them to, say, introduce a metaphorical daughter like, say, Cassandra Cain, just to make her a villain. And, again, there's the "rules;" I don't think we've seen anyone who could be Cassandra in the book at all yet).

Or is Batman's echo simply an answer to him, like, I don't know, The Joker or Catwoman or Bane or anyone you want to suggest? (It's pretty clearly not Catwoman, it would be unfair to make it The Joker, and Bane has seemingly been manipulated repeatedly by the mastermind, so he's either doing a hell of a job faking it, or he's not the mastermind either).

So I don't really have any idea. Maybe Vicki Vale, who's been a character throughout, although I couldn't imagine a motive, and she seems to have been in the dark about some of the key players, like Jason Bard, for example.

Anyway, Batman and The Riddler play some verbal games with one another, Vicki and her editor try to connect everything that's gone wrong in Gotham into one master plot and Whoever The Mastermind Is summons a bunch of villains—the Arkham escapees Batman just busted last issue, Cluemaster and his gang of G-listers, and Catwoman—and offers them a bunch of Batman equipment stolen from Batman's bunkers, including what look a little like Batman versions of the half-AT-AT Imperial Walker Thingees* (BAT-BATs?). 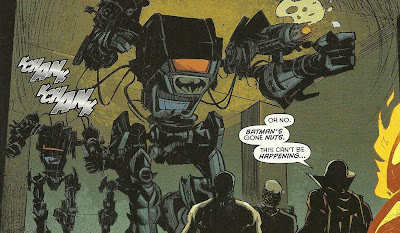 Felix Ruiz, as mentioned earlier, draws this issue. I like his rough, scratchy artwork, and particularly like the way he draws Batman's cape, as a sort of jagged black cloud that trails behind him: 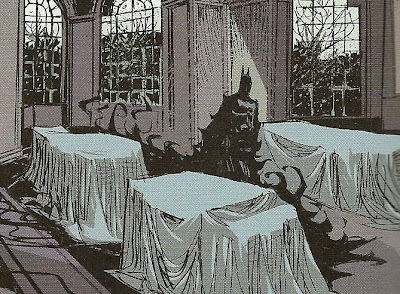 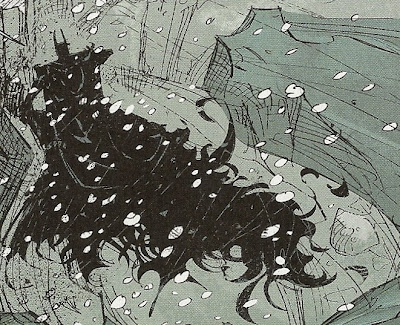 Batman Eternal #40 (DC) This issue consists almost entirely of direct follow-ups to scenes in the previous one, which makes it somewhat unfortunate that Ruiz is replaced by the new art team of Davide Furno and Paolo Armitano, as so many characters look differently. This isn't so much a problem for all the costumed-characters—the guy in the Batman costume is definitely Batman, the guy dressed like a scarecrow is definitely Scarecrow, etc—but there's a paid assassin who tries to murder Vicki and her editor who is drawn exactly like Jason Bard, which is a bit confusing.

Batman survives a deathtrap The Riddler set for him and takes him in, Vicki survives her attacker but her editor may not e so lucky, and all of the villains except Catwoman take up Whoever The Mastermind Is' offer of Batman equipment to "go to town" with and Firefly tries to kill her for it (and seems to succeed, causing Lock-Up to say, "Well, I guess nobody's running the city now;" is that mean to be a clue? There is a Batman villain named Nobody, who was the son of one of the men who trained Batman, but he was a character in a Pete Tomasi-written story arc...and Damian killed him).

Oh, and on the last page we see Jim Corrigan appear for the first time since The Spectre destroyed Arkham; he's dragging the unconscious Maxie Zeus, whose body the ghost of Deacon Blackfire was possessing, and says he's been in the tunnels for two weeks now. The cliffhanger ending features kids with glowing eyes. They could either be possessed by some kind of supernatural hoodoo, appearing on the same page as Corrigan as they do, or have something to do with that nanovirus from the Red Robin/Harper Row plotline, which we haven't checked in on in...a really long time now. 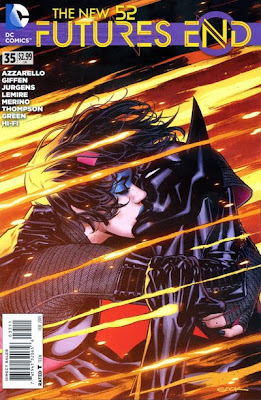 New 52: Futures End #35 (DC) So what do you think kissing Batman Beyond is like? His mask covers his lips, and I think it's some kinda futuristic costume that, like, appears on him, doesn't it? So maybe it's a hologram of some sort, and it's just like kissing a normal person? Or wait, he has wings and jet-boots and shit in the costume, so it must be tangible. Is it like kissing spandex then? Sweaty spandex with dried spit all around the mouth? Gross.

New 52: Futures End #36 (DC) Guest-starring Justice League Dark 2019! (Or, if this book is set "Five Years From Now," does that mean it's 2020 now?) THis consists of Madame Xanadu, Deadman and Zatanna, who is wearing a weird cape covered in hot-pink, glowing design elements. Maybe you have to have read Justice League Dark: Futures End to know what that's all about? They briefly appear in a scene in which Amethyst, Princess Formerly Of Gemworld takes the dying Frankenstein to them for help, but he's beyond their help.

There's a scene with all the dumb and/or boring characters (the ones on the cover).

There's a scene in Smallville that does't make much sense.

There's a scene Terry "Batman Beyond" McGinnis and Plastique "screw around" on a rooftop, with the latter putting her hand on or near his penis and the pair making out masklessly. Terry blurts out that he's never known the touch of a woman ("It's not like there's time for...this kind stuff when you're fighting a war, y'know?").

He likes to watch.

In the final scene, Stormguard randomly tells his origin to Superman II Billy Batson, who is still wearing his dumb-ass mirrored Cobra Commander face-plate, despite the fact that everyone in the whole world knows that he's not the original Superman, but the former Shazam trying to carry on Superman's legacy by wearing a stylized version of his S-shield and an otherwise entirely different costume. And the new Firestorm appears on the satellite.

Every time I get sick of this title, they throw in Justice League 2015, just to intrigue me. Damn them. 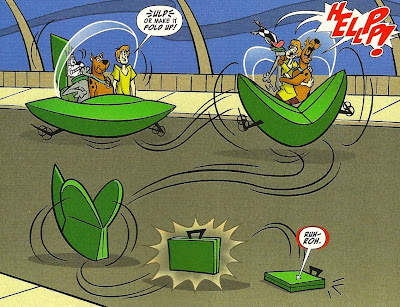 Scooby-Doo Team Up! #8 (DC) It's treadmill gags galore as Scooby-Doo and the gang meet George Jetson, his boy Elroy, daughter Judy—and, well, you know how the song goes. Scott Jeralds, who drew the previous issue co-starring The Flintstones which this one is a direct continuation of, also draws this one, which is written, like all of the previous issues, by Sholly Fisch. Like that issue and the Teen Titans Go! issue, this one features a rather uncomfortable fit between character design styles—the iconic designs of all the characters are so distinct and so far apart that they don't really belong together, and Jeralds doesn't do anything to reconcile them (That is, Scooby-Doo and the gang aren't drawn in Jetsons style, nor are the Jetsons drawn Scooby style). That does make for a few interesting scenes, however, like when Daphne stoops nearly to the ground to get in tiny Mr. Spacely's face.

Fisch again does a remarkable job of coming up with a script that seems to work as both a Jetsons story and a Scooby-Doo story, but I don't think this particular franchise offered as many gag opportunities as previous pairings. The most obvious point of overlap between the two is that Scooby and Astro have identical "accents," which a few jokes are made about, but certainly not enough to sustain the whole endeavor.

It's still good, of course, it's just maybe the least good issue of the series so far.