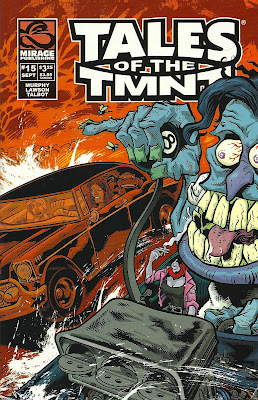 When I first saw the cover for Tales of The TMNT #15 (#13 and #14 represent another hole in my collection, if you're wondering), I assumed the story inside must be somehow related to the story from 1990's Teenage Mutant Ninja Turtles #30, in which Casey Jones and the Turtles journey to an alternate dimension populated entirely by car racing lunatics who look much like the guy on the cover of this issue (That issue, by the way, was by Rick Veitch, making his return to the title after his three-issue, 1989 story arc, "The River").

That proved not to be the case, as editor Steve Murphy notes in his introduction. That character is "demon hot-rodder Von Clutch," and the headless lady riding shotgun is his girlfriend, Darlin'. They are apparently characters created by Laird and some Mirage co-horts for their "intellectual property development company" Funatix!, Inc. 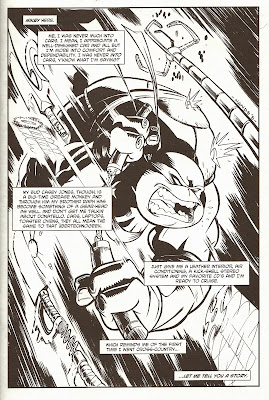 So this issue's credits include a plot by Murphy, Eric Talbot, Jim Lawson and Peter Laird, a script by Murphy, pencils by Lawson and inks by Talbot. The frontspiece is by Fernando Pinto, and features a fairly generic but dynamic image of Michaelangelo diving face-first into a hail of ninja weapons. The narration boxes all concern cars, and, as with the last issue we covered, it doesn't really "work" by the rules the creators have already established for themselves. After all, it's Michaelangelo who narrates the introductory page, saying "...Let me tell you a story.." But when it comes time for the actual story being told, the one that fills up the issue, Casey and April's adopted daughter Shadow is once again the narrator. And, as with the several previous Shadow-centric stories, that narration comes in the form of her journal entries.

She and Casey are taking his meticulously restored and cared for '57 Chevy Bel Aire way out west to where Casey spread Shadow's mother's ashes (in the "City At War" storyline that closed out the original 1984-1993 volume of Teenage Mutant Ninja Turtles). Michaelanglo, wearing the perfect disguise of a trench coat and hat, is riding along in the backseat.

As they're driving along, Shadow is reading about highway apparitions in an issue of The Fortean Times, and there's a neat bit where Casey harumphs Fortenalia in general, using old man words like hooey and malarkey. Given Casey's life experiences, you think he'd be a bit more open-minded.

"I don't think walkin' talkin' five-foot tall mutant turtles are allowed to be skeptics," Michaelangelo says when Shadow asks him what he thinks, and Casey eventually narrows his skepticism down a little: "I just don't believe in ghosts is all." 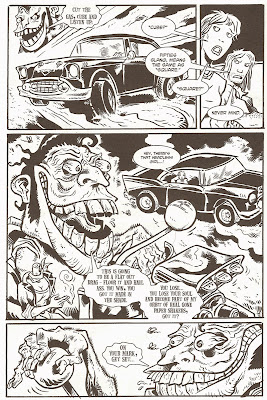 Before long, he'll have little choice but to believe, as he runs headlong into a specter the locals at a roadside diner tried to warn him of: Von Clutch, the guy on the cover, who drag-races hapless victims for their souls.

Casey, Shadow and Michaelangelo find themselves racing Von Clutch and Darlin' for their souls, but Shadow has a secret weapon: She found a human skull not far from the side of the road when they made a pit stop, and tosses it to Darlin'. Turns out her intuition was right; it was her skull, and its absence was what was tying her and Von Clutch to this world.

Her head reattached to her body, they ascend to heaven, releasing the souls of all the others Von Clutch has beaten in the past.

As our heroes ride off, one more ghost appears—that of Shadow's mother Gabby. 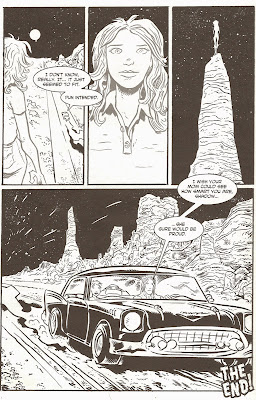 This is really the best kind of Teenage Mutant Ninja Turtles story, even if this particular installment is particularly light on Teenage Mutant Ninja Turtles—Michaelangelo basically just riding along on Casey and Shadow's adventure. That is, the kind where something random and weird happens to our heroes, putting them in a conflict they can meet and defeat, generally in the space of an issue. 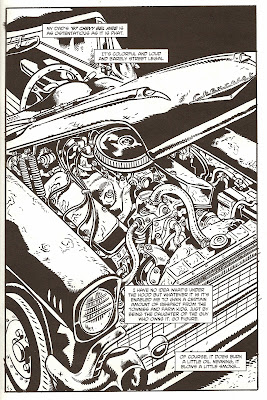 Casey and Michaelangelo are definitely out of their element here, with neither of them getting to raise a weapon, or even do any kind of fighting at all, and Casey appearing mask-less throughout. But the issue does give Lawson ample opportunity to draw cars, engines and motorcycles, things that are apparently among his passions. And the desert landscape makes for a refreshing change of pace from the normal urban (New York) or rural (Northampton) environments most Turtle adventures are set in.

This issue also has a back-up story, a six-pager by Murphy and Lawson once again starring Utrom scientist Professor Obligado. 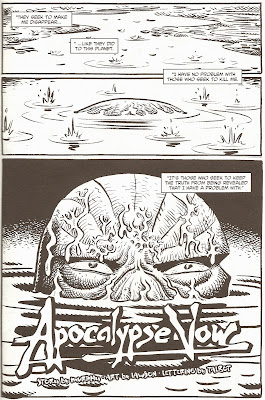 Entitled "Apocalypse Vow," there's not really much to it at all, although I guess it's part of a series of stories (the introduction says it's a sequel to the story from the previous issue, and it ends with a "To Be Continued...") 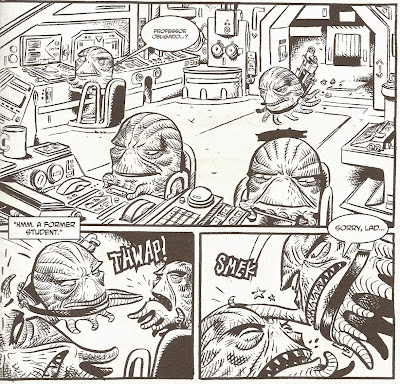 The last few pages are sort of interesting, in that they are action scenes involving gunplay and martial arts, but the hero and his enemies are all Utrom aliens...meaning they are all fleshy, basketabll-sized creatures with little tentacles.
Posted by Caleb at 9:46 PM

That last set of images: I expected it to be one of the Turtles emerging from the water. I saw that first pic and immediately went "How has someone not drawn that before?" Then scrolled to discover it wasn't exactly the homage I was expecting. Disappointing.