Oh hey, remember like 24 hours ago, when I said DC's April 2015 would be all-Convergence, all-month? I might have exaggerated, and the publisher will be publishing a few books that aren't Convergence or Convergence tie-ins, and fewer of which will be noteworthy enough to discuss here, in our regularly-scheduled review of DC's previews...which they released on Tuesday afternoon, instead of Monday afternoon, as per usual. Perhaps because Marvel released their solicitations on Monday afternoon instead of on Tuesday, which is when they usually announce theirs. Probably to make room for their big announcement.

Man, covering the comics industry, even as on the half-assed amateur way I do so here on my own personal time-wasting comics blog, is hard. I think there was a State of the Union speech by what's-that-guy's-name, the editor-in-chief of the United States of America today. That stuff is probably even harder to keep up with (I wonder why Marvel decided to talk up Secret Wars on Infinite Earths today, anyway? It's not exactly a slow news day; but, on the other hand, maybe the fact that it's not a slow news day means it is a slow "news" day, and thus was perfect for revealing their plans to do their own kinda sort completely unnecessary reboot...?

Well, whatever. Tonight we'll look at the solicitations we didn't look at last night. That is, everything that's not Convergence-related. (As for Convergence that is, of course, DC's latest, greatest attempt to give fans exactly what they want, just not in the way that they actually want it; Comics Alliance has 'em all here. As for Marvel's April solicitations, I hope to get to them by Thursday or Friday evening, but in the mean time, you can read them all here.

Now, let's see what DC has to offer in April, other than Convergence...

The short story from 1989'a Secret Origins Special #1 by Neil Gaiman, Bernie Mireault, Matt Wagner and Joe Matt. In addition to being one of the greatest Riddler stories of all time, albeit a "last" Riddler story, and having perhaps the most likely creative team for a Batman comic imaginable in the year 2015, its presence allows you to put Neil Gaiman's name in the solicitation and on the cover, and move some paper.

I haven't seen that particular phrasing used in a title before, and while the construction's a little awkward—Why not just "The Greatest Riddler Stories Ever Told," or "Arkham Asylum: The Riddler" or "Batman Vs. The Riddler"?—that's a pretty good idea. I'd love to see more books in such a line, even though I have a sneaking suspicion I've read most if not all of what DC editors would consider, say, the best Penguin or Scarecrow or Two-Face stories, and it would probably be forever before they got to, say, Batman: Arkham—Catman and Batman: Arkham—Calendar Man, huh? 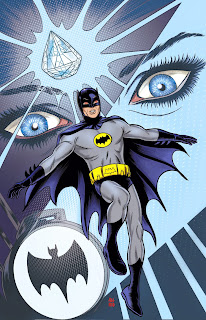 BATMAN ’66 #22
Written by RAY FAWKES
Art by JON BOGDANOVE
Cover by MICHAEL ALLRED
On sale APRIL 22 • 32 pg, FC, $2.99 US • RATED E • DIGITAL FIRST
The guest team of writer Ray Fawkes (BATMAN ETERNAL, CONSTANTINE) and artist Jon Bogdanove (SUPERMAN: THE MAN OF STEEL) bring back Marsha, Queen of Diamonds, for another bejeweled bout with the Dynamic Duo. When she strikes at a gala ball for Gotham City’s elite, will even guests Bruce Wayne and Dick Grayson fall under her spell?

Weird; I was just mentioning my desire to see some Jon Bogdanove art attached to a DC book to be published in April last night—specifically, to Convergence: Superman—The Man of Steel, which his Steel co-creator Louis Simonson is writing and artist June Brigman is drawing—but I'll take this as a consolation prize. I'm actually pretty curious what a Bogdanove version of the TV show's Batman and Robin might look like, as I'm having trouble imagining it... 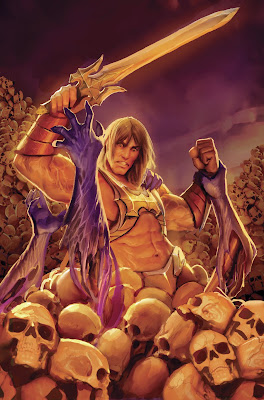 HE-MAN: THE ETERNITY WAR #5
Written by DAN ABNETT
Art by POP MHAN
Cover by STJEPAN SEJIC
On sale APRIL 29 • 32 pg, FC, $2.99 US
Skeletor has returned! After his dramatic appearance last issue, the question remains: Will he fight alongside He-Man and She-Ra...or against them?

Is it just me, or does it seem like The Eternity War has been going on forever now?


INFINITE CRISIS: FIGHT FOR THE MULTIVERSE #10
Written by DAN ABNETT
Art by ANGEL HERNANDEZ and EDUARDO FRANCISCO
Cover by MICO SUAYAN
On sale APRIL 15 • 40 pg, FC, $3.99 US • RATED T • DIGITAL FIRST
An armored Lex Luthor from the Gaslight world holds his own against Batman and Superman from Earth Prime. What will happen when Gaslight Hawkgirl enters the fray? Meanwhile, two other heroes wage a desperate struggle against the deadly, robotic Mecha Deathstroke.

Is it just me, or does it seem like Infinite Crisis has been going on for— Oh wait, I just used that one. Nevermind.


INJUSTICE: GODS AMONG US YEAR THREE ANNUAL #1
Written by RAY FAWKES and BRIAN BUCCELLATO
Art by SERGIO DAVILA, XERMANICO and JUAN ALBARRAN
Cover by NEIL GOOGE
On sale APRIL 29 • 48 pg, FC, $4.99 US • RATED T • DIGITAL FIRST
The Year of Magic is over, and the stalemate between Superman’s regime and Batman’s resistance continues. But some mysteries remain to be explained, like the true start of John Constantine’s involvement. What secret role did Dr. Occult play? And what have the Titans been up to all this time?

Seeing "Year Three" and "Annual #1" in the same title really cracks me up. I can't believe they're still on the background portion of the story of this game...shouldn't they be getting to the part where the heroic versions of the heroes show up to save the day in this dark and twisted alternate universe by now...? 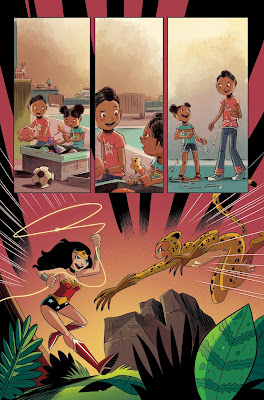 SENSATION COMICS FEATURING WONDER WOMAN #9
Written by CECIL CASTELLUCCI and LAUREN BEUKES
Art by CHRIS SPROUSE, KARL STORY and MIKE MAIHACK
Cover by FRANCESCO FRANCAVILLA
On sale APRIL 15 • 40 pg, FC, $3.99 US • DIGITAL FIRST • RATED T
It’s a “Girls’ Day Out,” and Lois Lane doesn’t do “puff piece” interviews, which is fine, because Diana of Themyscira is not interested in being treated as fluff. But when they’re attacked by croco-aliens and robots, the situation really gets heated! Then, in “The Problem with Cats,” Wonder Woman has been summoned to the Isle of Cats to rescue her Justice League teammates, but can Diana save the day?

Some great talents and some great "gets" on the creative teams for this issue. I hope this is selling well enough in both formats to keep it going for a while longer than the two digital-first anthology books that preceded it—Legends of The Dark Knight and Adventures of Superman. After all, Wonder Woman's got a lot of catching up to do when it comes to these sorts of stories. 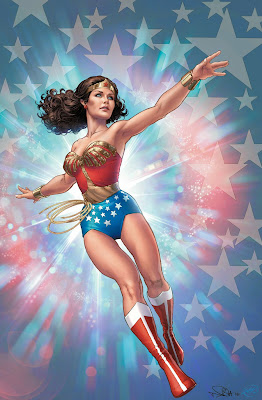 WONDER WOMAN ’77 SPECIAL #1
Written by MARC ANDREYKO
Art by DREW JOHNSON and MATT HALEY
Cover by NICOLA SCOTT
1:25 Variant cover by PHIL JIMENEZ
One-shot • On sale APRIL 29 • 80 pg, FC, $7.99 US • RATED E • DIGITAL FIRST
Retailers: This issue will ship with two covers. Please see the order form for more information.
Don’t miss this digital-first special based on the classic TV series starring Lynda Carter! Travel back to the sizzling ’70s as the undercover Amazon Princess joins forces with special agent Steve Trevor to defend America against Cold War-era criminals. A search for an escaped Soviet scientist brings Wonder Woman to the hottest disco of the day, Studio 52. A live stage act might prove more of a threat to Wonder Woman than the Russian Roller Derby girls out to bring the scientist home.

Oh yeah, Wondy's getting a fourth book in 2015 (following Wonder Woman, Sensation Comics and Superman/Wonder Woman. I missed the show the first time around, being a baby when it was on TV, and only saw a few episodes on cable in, like, 2000 or so. I didn't love it, but I do love Wonder Woman and I also love comics, so I'm at least looking forward to trying tout a few issues. 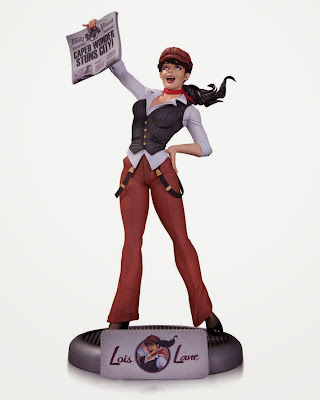 DC COMICS BOMBSHELLS LOIS LANE STATUE
DESIGNED BY ANT LUCIA
SCULPTED BY TIM MILLER
Due to the overwhelming responses from the DC Comics Bombshell variant covers comes the lastest statue in the wildly popular line featuring your favorite heroes and villains portrayed in the pinup style of the 1940s and 50s!
Limited Edition of 5,200
Measures Approximately 11.5" Tall
$124.95 US • On Sale August 2015 • Allocations May Occur

I kind of love and hate this thing at the same time. It's stupid and demeaning but clever and awesome and creepy in a good way and creepy in a bad way all at once! I have no idea what's going on with her face, though—did newsboys really look that ecstatic when shouting "Wuxtry!"...? And—woah, woah, woah. Hold up. These things cost $125 dollars...?

Look, I don't want to tell anyone how to spend their money or anything, but, um, if you've got $125 to blow on some dumb statue, I sure hope you've already donated $50 to Norm Breyfogle, The Hero Initiative, the Comic Book Legal Defense Fund, The Siegel and Shuster Society, The David Sheldrick Wildlife Trust, whatever that dreamy vampire Ian Somerhalder is up to, and maybe clicked the "donate" button on TheSaveageCritics.com in an effort to encourage Abhay, bought a hobo a hot lunch and maybe even bought a copy of my comic book.

I mean, if you've got money to spend purchasing or even collecting weird-ass foot-tall statues based on variant covers to DC Comics, and haven't already done all that stuff, well, let's just say you could probably be getting more out of your money. And hey, you can't take it with you; do you really want to leave it to your descendants to figure out what the hell to do with your Bombshell statue collection, knowing that they are just going to be quietly thinking ill of you as they embarrassedly try to sell them at a garage sale the summer after your passing...? 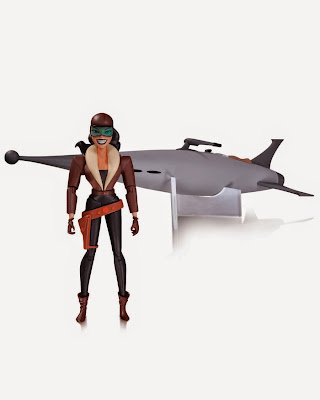 BATMAN ANIMATED SERIES: ROXY ROCKET DELUXE ACTION FIGURE
The fan-favorite line of 6" action figures from the Emmy Award-winning animated series continues with Roxy Rocket! For the first time ever you can own Roxy and her famed rocket in this deluxe figure pack.
Figure comes with show specific accessories, display base and rocket with working lights!
THE NEW BATMAN ADVENTURES: ROXY ROCKET – 5.5"
ROCKET MEASURES 12.25" LONG
$39.95 US • On Sale August 2015 * Allocations May Occur

Yes, there is a joke to be made here and no, I'm not going to make it.

(Also, "fan-favorite"...? "Famed"...? I do not think those words mean what the solicitation copy writer think they mean)
Posted by Caleb at 9:58 PM

Huh - I thought Wonder Woman '77 was going to be released as a miniseries, not an 80-page giant. Two issues into the digital series and I'm enjoying it so far - if the TV series had had actual supervillains in it, I think it would have been a more fun show.

Sensation Comics has been replaced on the digital schedule with Wonder Woman '77 for now, and has had some irregular issues released since. I was afraid that meant it was up for cancellation before it even got its 1 year's worth of issues that most of the digital series seem to shoot for. Glad to see it's still on the print schedule with some content that hasn't shown up digitally yet.

Really? SENSATION is being canceled? That's the worst news I've ever heard in the last few hours! Where did you read/see/hear that? I would like to know more...

I do find it hilarious that Superman is one of those ubiquitous "boob and butt" poses on the Infinity War cover.