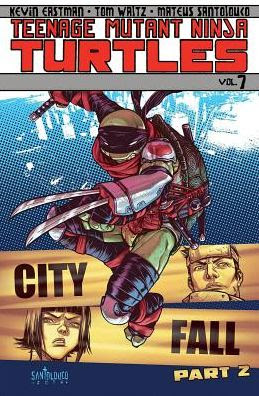 This volume collects IDW's Teenage Mutant Ninja Turtles #25-#28, wrapping up the seven-part "City Fall" story arc*, in so much that it collects the last issue labeled as part of "City Fall"...the story arc is here a sort of false construct, as the narrative just sort of bleeds from one issue to another, only the most minor of the sub-conflicts ever seeing real resolution. As serial comics go, IDW's TMNT has been truly serial...probably more serial than most.

The previous volume ended with a dramatic showdown between our heroes and the villains, in which Splinter and the Turtles discovered that The Shredder and his allies were able to "flip" Leonarod through magical brainwashing; making him a loyal warrior serving the interests of the Foot Clan (and trading in his good buy blue mask for a bad guy black one).

In this back-half of "City Fall"—still scripted by Tom Waltz from a plot by Waltz, TMNT co-creator and cover artist Kevin Eastman and TMNT editor Bobby Curnow and drawn by Mateus Santolouco—the now evil Leonardo has joined forces with The Shredder's granddaughter Karai to lead the Foot Clan in their war with rival martial arts criminal organization, The Savate. As fiercely as Leonardo may fight for the Foot, he still has a line he won't cross; he doesn't kill his foes, which causes Karai to doubt his loyalty, but Shredder doesn't want to push his new disciple too far, for fear of breaking the spell.

While the Savate and Foot fight, our heroes engage in their own little sub-plots, as Waltz and company maneuver everyone into another big, volume-closing clash. Raphael gets out of control, and tries threatening and roughing up thugs and dirty cops for information on Leonardo and The Foot. Michelangelo conducts undercover work as a pizza delivery man. Casey Jones is in the hospital, still healing from The Shredder's blow to his interior organs in the previous volume, tended to by April O'Neil (who kisses him, consummating their romantic status) and, occasionally, his friend Angel, a former Purple Dragon gang member.

Meanwhile, Splinter seeks an unlikely ally in Hob, who offers his help in exchange for a favor (He wants Splinter to steal him some mutagen with which he can begin to build a mutant army), Donatello seeks some high-tech gear from his irritable inventor friend to help them fight the Foot and the ghost of the Turtles' mother—a human woman, as in this version of the story, the Turltes are reincarnations of the human children of the human man that Splinter is a reincarnation of—picks at Leonardo's brainwashing, trying to awaken him.

And, in the oddest twist, Casey's abusive, alcoholic father decides to quite drinking cold turkey, rips off his shirt and pretty much immediately turns into Hun in a transformation more rapid than any mutation so far in the series...although there is an asterisk and a footnote saying to "See TMNT Villain Micro-Series #6: Hun" in one panel, so perhaps that explains how Hun grows a few feet and loses about 20 years in a matter of pages.

Hun, by the way, was a character created especially for the second TMNT animated series, the one that ran from 2003-2009. He was the leader of The Purple Dragons, and served as one of the primary villains. He was introduced into Mirage comics continuity in 2008's Tales of The TMNT #56, where he was a criminal who had a particular enmity toward Casey Jones, Casey having scarred and blinded him when Hun attacked him; this is his introduction into the IDW series...although I guess he's kinda sorta been in it all along, just in a different form and under a different name.

It all culminates in an abandoned theater, where The Shredder calls together all of the criminals in New York City (with even Storm and Walter White attending; see below) in order to execute the leader of the Savate in front of them all to prove he's the undisputed kingpin of crime now. 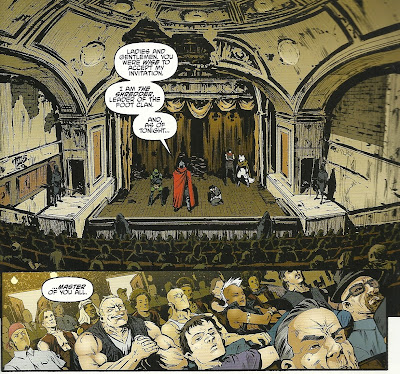 And then Splinter and the Turltes attack, and Waltz, Santolouco and company introduce wave after wave of characters into an escalating battle that fills about 25 pages at the back of the book; that's a pretty respectable amount of action for an American comic book.

The Shredder, Karai, Alopex, Brainwashed Leonardo, The Foot Clan, Hun and a bunch of criminals are all present when Splinter, The Turtles, April, Casey, Angel, Hob, Slash and Casey attack. As the battle starts to favor the Turtles, the creators throw in a suprrise: Bebop and Rocksteady, the mutant warthog and rhinoceros who were bumbling henchmen in the original TMNT cartoon series, now presented as bigger, scarier antagonists, and a genuine threat (The fact that Santolouco draws them gigantic, pretty much proportionate to the Turltes helps; as does the creators giving them a chainsaw and sledgehammer to fight with, although the weapons are dwarfed by their massive hands.

Eastman's variant cover gives a pretty good indication of just how many players there are in this fight scene: 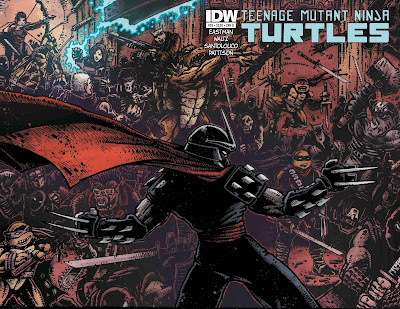 It's essentially the same ending as that of the previous volume—a tie between the two sides, both of which withdraw—only this time the good guys get Leonardo. And Alopex, who defects mid-battle, leaping on The Shredder when he's about to kill Splinter.

As the heroes escape, April mentions that she knows a place where they can hide out while they heal from their wounds. The last panel includes a next-issue box reading, "Next: Northampton," which is, incidentally, the name of the very next collection. Echoing the events of the original volume of Teenage Mutant Ninja Turtles comics, April, Casey, Splinter and the Turtles retreat to Northampton after a particularly vicious battle with Shredder and The Foot Clan.

As climaxes go, this is certainly a good one, as Waltz and company manage to get almost every character to appear in the series so far in the same room to duke it out with one another.

Putting both Hun from the 2003 cartoon and Rocksteady and Bebop from the 1987 cartoon into a Turtles comic book at pretty much the same time does feel a little forced and uncomfortable; I suppose it will remain to be seen how they work out, but, at least as read in the trade collections, it seems like fan-service (of the nostalgic type, rather than the manga meaning of the term) has overtaken overall quality plotting and storytelling (Alopex's conversion similarly comes out of nowhere...at least, from what is evident in this comic; IDW does tend to leave out parts of the overarching story if its told in one-shots, miniseries or specials of any kind). 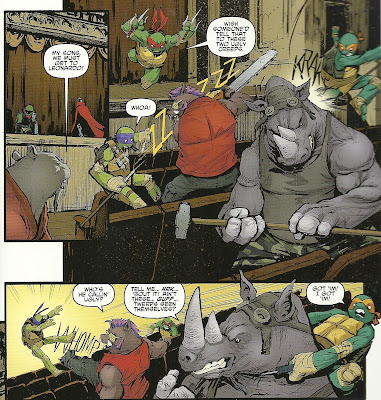 At least Santolouco manages to draw the living hell out of Rocksteady and Bebop, making them distinct enough from their bufoonish original incarnations that they seem new here.

*According to the copy on the back cover, this is "The biggest event in TMNT history," which can't possibly be true. Even if they want to define "TMNT history" as whatever happens in the comic books, well, the first volume of the series concluded with a 13-issue story that nearly doubles the length of this one. That story, by the way, was called "City At War" and seems to have inspired the title of this story arc, if nothing else.
Posted by Caleb at 8:41 PM