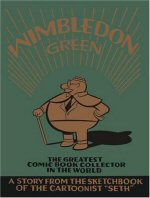 Wimbledon Green: The Greatest Comic Book Collector in the World (Drawn and Quarterly), by Seth

Why’d I Wait?: Sheer ignorance. I honestly had no idea this book even existed until I saw it sitting on a cart at the library I work part-time at, waiting to be put back on the shelf.

Why Now?: With a title like that, what comic book enthusiast could pass it up once they were made aware of its existence?

Well?: Thank Daniel Clowes for coining a term we can use to discuss this work—like Clowes’ Ice Haven, Wimbledon Green is a “comic strip novel,” comprised of individual comic strips of varying length and style which each contain a small part of a an overall, novel-length story.

The technique is not used as successfully here as it was in Ice Haven, yet if this doesn’t exactly feel like an extremely important work, that may be because it wasn’t supposed to be: The cover proclaims it “A Story From The Sketchbook of the Cartoonist ‘Seth’,” and in his foreword, said cartoonist Seth explains “it’s just a send up of comic book collectors.”

And while it lacks the power and depth of Clowes’ best work—and the acid zing of Clowes’ sense of humor—if Wimbledon Green is Seth’s idea of a dashed-off lark, it’s certainly not apparent from the quality of the art. It’s a beautiful looking book, most of the well-designed pages are simply jam-packed with 20-panel grids and colored in different shades.

The title character is a sort of Scrooge McDuck-type of wealthy eccentric, traveling the world on quests to find the oldest, rarest and most valuable comic books. Seth invents plenty of rival eccentrics for him to race to issues of fictional books like The Green Ghost #1 and Corns Bunion. The rich subculture Seth invents feels both real and charmingly alien at the same time, with his comic book aficionados all having collecting pseudonyms that recall the handles of old gangsters—Ashcan Kemp, R. Saddlestitch, “Cuts” Coupon, Pulpy Wise, and so on.

Most of the book is done in a mockumentary style format (a format that’s grown tiresome from it’ over-usage in film comedy), dealing with a legendary collecting scandal and the collectors’ flailing attempts to connect Wimbledon Green to one “Don Green.”

These are broken up with adventure-style strips that include an epic battle over the Green Ghost #1, a detailed account of Wimbledon Green’s queer, Howard Hughes-like personal habits and a delightful section where Green elucidates the virtue of fictional hobo humor series Fine and Dandy (I’m a sucker for hobo humor).

If the whole of Seth’s “comic book novel” is less than transcendental, and it’s overall story rather mediocre, some of the strips that make up that whole are pretty fantastic in their own right. Seth’s natural audience, the comic book community, will especially appreciate “Young ‘Cuts’ Coupon –1949” and “Jonah: A Brief Profile by Ashcan Kemp.”

In the former, a young, foreward-thinking Coupon tells the readers that he understood that “there was deep meaning in these tales of masked men and anthropomorphic animals…while on the surface ‘comic books’ appear to be half-witted stories for sub-normal boys…my ten years of study has revealed much more.” In just 16 panels, Seth distills all the joys and frustrations that come with a life dedicated to comics about as perfectly (and certainly as humorously) as anyone before him as managed.

In the latter, Kemp has equally true, if more cynical, thoughts on the community itself: “For a bunch of guys who like good-over-evil stories…you sure meet a lot of morally bankrupt assholes.”

But its worth the feelings of frustrated societal misunderstanding articulated by Coupon and the morally bankrupt assholes Kemp sees for those brief feelings of nostalgic peace Don Green found in used bookstores and dusty attics. And of course, top notch hobo humor.

Would I travel back in time to buy it off the rack?: Funny I should mention time travel at all, as there’s an intriguing undercurrent of melancholy to the work, about the collectors’ desire to reclaim pieces of their childhood, and how that impulse, in the case of the single-named character “Jonah,” the world's greatest comic book theif, turned him from collecting to villainy.
Posted by Caleb at 9:16 PM