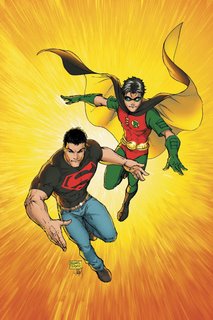 Last Wednesday saw the long awaited release of Superman/Batman #26, a special issue of the Jeph Loeb-written series plotted by his late son Sam, who sadly didn’t live long enough to see it’s publication. Fleshing out the story are some of the best writers in the business, and drawing it are an assortment of all-star artists.

The main story focuses on a team-up adventure between Superboy and Robin, DC’s two top teen heroes. The pair were both in the latest incarnation of the Teen Titans and, prior to that, were both members of the teen team Young Justice (yeah, it’s a lame name—but it’s still better than “The Ravers,” Superboy’s first team).

During writer Geoff Johns’ run on Titans, he’s repeatedly stressed the friendship of Superboy and Robin, something that has seemed more than a bit forced, considering how little on-panel time the two have spent together (they’re rarely ever alone with one another; most of the times they did team up over the years, Impulse was always along for the ride).

Now, why anyone wouldn’t buy Superman/Batman #26 as a single issue is beyond me, but I suppose there are some who just don’t buy single issues no matter what. In which case, I suppose it will need to be collected in a trade at some point, huh? But where?

That’s the question we’ll try to solve in this first installment of the Dream Trades feature, in which I scour the long boxes to assemble trade paperback collections that don’t exist, but probably should.

The most obvious trade to put that issue in would be something like, say, SUPERBOY/ROBIN, which could collect all of the two teen titans’s team ups.

Their very first meeting occurred in two-part, prestige format series from 1996, a series that boasts one of the most awkward titles of any DC comic book ever, Superboy/Robin: WF3: World’s Finest Three . It was co-written by primary Superboy scribe Karl Kesel and primary Robin writer Chuck Dixon, and featured art by Tom Grummett and Scott Hanna. The story involves Metallo attacks Gotham City while Batman’s out of town and Superman’s unreachable, so Robin resorts to calling in Superboy, the only hero with a Super- in his name who’s listed in the phone book.

The only other major team-ups between the two were Superboy #85, in which the Boy of Steel comes to Gotham and ends up teaming up with Batgirl, though Batman and Robin are both prominently featured, and Superman/Batman #7 by Jeph Loeb and Pat Lee, in which the pair perform an errand for their mentors and do some bonding.

Even if you finished our imaginary SUPERBOY/ROBIN trade off with the lead story from Superman/Batman #26, it wouldn’t add up to a terribly exciting collection, would it?

Perhaps more exciting would be something more gigantic and completist, something with a ton of Superboy stories his newer fans probably missed, something in the vein of an omnibus or Showcase Presents volume; maybe even a black-and-white volume with the lower-grade paper, allowing DC to jam-pack it with old stories they were never going to collect in a trade anyway, yet still keep the price relatively low. Something like this (imagine harp sound that happens at the beginning of a flashback or dream sequence in a TV show when the visuals get all wavy)…

A collection of the best Superboy team-up stories from his fictional career of superhero-ing, assembled in chronological order. An original cover by Tom Grummet, a forward by Karl Kesel, and an afterward by Dan DiDio, who wasn’t simply the guy in charge of DC when Superboy got killed—he also co-wrote Superboy’s title just before it’s cancellation. Inside we’d find the following…

Superboy and Robin: The above discussed WF3 and the two Superman/Batman issues.

Superboy and the Suicide Squad: When his villains King Shark and Knockout get press-ganged into joining Amanda Waller’s squad on an underwater suicide mission, Superboy volunteers to join them. Their team includes SS regulars Deadshot and Captain Boomerang. This story ran in Superboy #13-#15.

Superboy and Green Lantern: In Superboy #20 the new Superboy met the then new Green Lantern Kyle Rayner, as they battled the Scavenger and Black Manta in a pretty decent one-issue story. They re-teamed later in a better two-part story spanning GL #94 and Superboy #47, in which they encountered volcano goddess Pele.

Superboy and the Legion of Superheroes: A classic, Silver Age team-up got reinvented for the ‘90s in Superboy #20-#21 and Legionnaires #31.

Superboy and Clark Kent: In Adventures of Superman #541, a just-married Clark Kent and Lois Lane were honeymooning in Hawaii, and encountered a monster from Hawaiian folklore. Having temporarily lost his powers, Clark has to sit on the sidelines while Superboy saves the day.

Superboy and The Ravers: Though he was on Young Justice and the Teen Titans and even the Legion of Superheroes (briefly), Superboy’s first team was actually The Ravers (Hey, it was the ‘90s!), created and written by Karl Kesel. In issues #7-#9, Superboy and his team (Including Sparx, Rex the Wonder Dog, and the newest bearer of the Dial H for Hero belt) go on a road trip through the DCU, meeting (deep breath now): The Flash, Impulse, Guy Gardner, Firehawk, Blue Devil, Booster Gold and Blue Beetle, Two-Face, Lady Black Hawk and the then electric-powered Superman.

Superboy and “Team Superman”: In extra-sized one-shot Team Superman #1, Superboy joins Superman, Steel and Supergirl in a fight against a particularly deadly cosmic villain. It was written by then still pretty much unkonwn Mark Millar, and featured art by Georges Jeanty and a cover by Brian Stelfreeze.

Superboy and Captain Marvel Jr.: In Superboy + The Power of Shazam! #1, the two teenage versions of Superman and the most Superman-like superhero teamed up—like all of the “plus” specials, it wasn’t a remarkable story, but it was plenty of fun.

Superboy and The Flash: Following the success of the Bruce Timm-produced
Batman and Superman cartoons, DC launched an anthology title that cast an animated-style spotlight around the rest of the DC Universe. It was a short-lived series, but was great while it lasted, giving the DC Universe of the ‘90s an old, Silver Age Showcase treatment. Each issue of Adventures in the DC Universe had a reader-friendly feature story introducing a superhero or two, and back-ups. In #14, the lead story, by writer Steve Vance and John Delaney, featured a Superboy/Flash team-up in which the heroes race one another.

Superboy and Risk: Neither of these two cocky teen heroes made it out of Infinite Crisis in very good shape, did they? This one-shot was part of a series of specials designed to pimp Dan Jurgens’ version of the Teen Titans (which Superboy sort of tried out for in the team try-out issue). In each one, a Titan teamed up with another more popular hero. In Superboy & Risk Double-Shot #1, Jurgens and Kesel told the tale of Superboy going 21 Jump Street-style undercover as a nerd at a high school. The art was by Joe Phillips, who may not be the definitive Superboy artist (that would probably be Tom Grummet), but is probably my favorite.

Superboy and Superboy Sr.: In Young Justice cross-over event Sins of Youth, Klarion the Witch Boy pulls a universe-wide age swap, making all the teen heroes adults, all the adult heroes teens and the JSA toddlers. In Superboy Jr. and Superboy Sr. #1, a now adult Superboy teams up with a now teenaged Superman. Nice, cartoony art by Rob Haynes.

Superboy and The Creeper: In Superboy #93, the maniacal Creeper has lost his grin, and it’s up to Superboy, Jimmy Olsen and Perry White to make him smile somehow if they plan on saving the day (it actually makes sense in context). They go to great, great lengths to do so.

Superboy and Batgirl: In addition to their first meeting in Superboy #85, Batgirl and the Kid would meet again on a cruise in Batgirl #39. A few issues later, Batgirl would hop a train to Smallville, Kansas in the hopes of sharing a kiss with the Boy of Steel, though fate keeps intervening. Dylan Horrocks and Andrew Sibar’s Batgirl #41 would be the issue to include—and don’t leave out the gorgeous James Jean cover!

Superboy and Raven: In Teen Titans #26, Geoff Johns teams a considering retirement Superboy with empathic Raven, and together the two explore his soul.

Superboy and Nightwing: In Teen Titans #33, Johns is joined by old Young Justice artist Todd Nauck for one of the last Superboy stories ever told, in which he alone answers Nightwing’s call to take on Alex Luthor’s multiverse-making tower.
Posted by Caleb at 8:45 PM