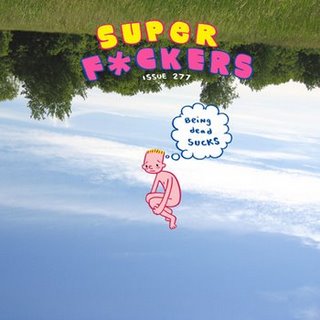 52 #6 (DC Comics) This issue of DC’s all-around best superhero comic introduces us to The Great Ten, China’s all-new superhero team (as seen recently in that font of comic book news, The New York Times). Even more exciting, however, is the conclusion of this week's issue, in which one two-page spread shows Booster Gold stumbling into a time-travelling hero's abandoned lab and discovering two chalkboards full of clues for readers to pore over and think about for weeks to come.

Civil War #2 (Marvel Comics) For months Marvel has been talking about the ending of this issue being one of the biggest events to occur in a Marvel comic in 40 years, an event that will set the Internet on fire. They weren’t kidding. The ramifications of this particular event totally overshadow the rest of the issue, which is really quite excellent—Mark Millar continues to give us a big Marvel Universe story that feels relevant to the real universe and unfolds like a summer blockbuster, and the art team of Steve McNiven and Dexter Vines just draw the hell out of everything. But back to that ending: Wow. No one can accuse Millar or Marvel editorial of lacking balls, and this is one big change that is frigging gigantic, a simple-seeming, human-scaled action that makes everything that occurred in DC’s big, cosmic, universe-shaking Infinite Crisis seem trifling in comparison.

JLA #22 (DC) In the first issue of a new story arc, writer Steve Englehart and artists Tom Derenick and Mark Farmer return to the most maligned Justice League line-up of them all—that of the Detroit years. Steel, Gypsy, Vibe and Vixen are so little seen these days that just about any story revisiting their brief tenure on the Justice League seems fresh and welcome.

Red Sonja/Claw #4 (WildStorm/Dynamite Entertainment) There are about forty-two thousand barbarian comic books on the stands right now, and about half of them feature Red Sonja in them. So it was the presence of Valcan, star of the old Claw, The Unconquered comic that made this an attractive series. Given the choice between Conan-with-boobs and Conan-with-a-cursed-right-hand, the latter seems a tad more interesting and rare, but there was precious little about this series that was interesting or rare. Only two things, actually: The fact that the villain violates the sword and sorcery genre rules deeply ingrained in anyone who’s ever played Dungeons & Dragons by being both a fighter and a magic-user, and how unintentionally funny the last panel of this issue is. I’m still down for next week’s launch of a Claw on-going series, though.

Super F*ckers #277 (Top Shelf Comix) It may say “Issue 277” on the cover, but by my count this is only the third issue of James Kochalka’s Super F*ckers series, about a team of Legion of Super Hero-esque super-teens who spend all of their time swearing rather creatively at each other. In this issue, Jack Krak calls a team meeting to make himself team leader, Vortex and Grotessa make out, Burdock gets high on burning paint chip fumes and then tries to follow Abraham Lincoln’s example, and dozens of new combinations of swear words are invented.

Superman #653 (DC) It’s Lex Luthor versus Superman for the ten millionth time, but this time Luthor has a rather unique weapon, and writers Geoff Johns and Kurt Busiek come up with a pretty sweet cliffhanger. I h onestly have no idea how either Superman or Luthor will survive the predicament they're left in, and yet I have absolute faith they both will.

Marvel Westerns: Two-Gun Kid #1 (Marvel) In the tradition of the recent Marvel monster and romance events, the company heads to the vaults to unearth some old non-superhero genre stories and revisit long-neglected characters. In this issue Dan Slott has the Two-Gun Kid fighting werewolf cattlerustlers in the past (and teaming up with She-Hulk in the present); the weird team of Keith Gifen, Robert Loren Fleming and Mike Allred tell a short tall tale about Hugo, the world’s shortest cowboy; and a Stan Lee/Jack Kirby story about The Rawhide Kid fighting a monster totem pole gets reprinted.
Posted by Caleb at 5:29 PM