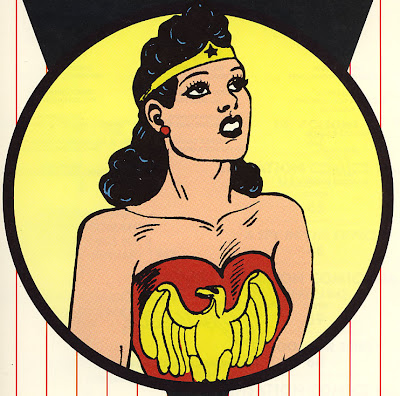 Wonder Woman’s had a rough time of things lately.

She’s the First Lady of Superheroes, a position she’s earned by, um, being the first lady superhero. She’s one of only three Golden Age comic book characters whose adventures have been in continuous publication from the time she was created to the present (You know the other two). She’s one of the most widely recognized comic book characters in the world, even among the “civilian” population.

The lady deserves some respect, you know?

But what does she get instead? I don’t know—what’s the exact opposite of respect?

The rejiggeirng of DC’s fictional universe that occurred in Infinite Crisis drastically changed Wonder Woman’s status quo in the company’s shared setting, so that the decades-old rejiggering of Crisis On Infinite Earths was de-rejiggered, apparently knocking George Perez’s run on her title out of continuity/canon (And here’s a dispiriting thought: This is apparently no longer canon, but this is).

At the same time, her series, which was experiencing one of it’s rare peaks in quality thanks to writer Greg Rucka’s acclaimed run on the title, was cancelled to make room for a brand-new Wonder Woman series, to be written by relative newcomer Allan Heinberg (Whose previous comics credits included maxiseries Young Avengers and co-writing a JLA arc with Geoff Johns).

In relaunching the title, Heinberg took his clues from the 1970s TV show, introducing a new, nostalgic/retro status quo that was more in keeping with the Wonder Woman of the ‘60s and ‘70s then the one readers have followed the last 20 years in comics (and, in the past few years, on the Justice League cartoon).

This Wonder Woman had a Clark Kent-like secret identity (Diana Prince, an Amazonian secret agent who wore her hair up and a pair of shaded glasses) and worked for the U.S. government’s Department of Meta-Human Affairs. She’d stepped down from her role as ambassador, thus leaving the world stage to be a secret agent and fight supervillains. Heinberg delivered the first four-issues of an intended five-issue run over the course of a year before DC removed him from the schedule due to missed deadlines.

Next up was a not-very-good one-issue fill-in story, making way for best-selling author Jodi Picoult. Rather than giving Picoult the sort of carte blanche they’d given best-selling author Brad Meltzer with the Justice League characters in Identity Crisis and Justice League of America or Heinberg on Wonder Woman, Picoult was assigned to write a six-issue arc that built on Heinberg’s new version of the character. (Imagine instead a Picoult-written miniseries or original graphic novel, in or out of continuity).

If Heinberg’s Wonder Woman was mediocre, Picoult’s was actually terrible.

Like Heinberg, she ignored much of the last 20 years or so worth of Wonder Woman stories (Perhaps rightly so, perhaps not, depending on Wondy’s continuity, which no one knows the status of post-Infinite Crisis). In addition to keeping Heinberg’s innovations of a secret identitied-up ex-Goddess of Truth who’s trying to learn what it’s like to be an ordinary human buy hunting superhumans as a secret agent, Picoult played Wonder Woman as a fish out of water character who can’t order coffee, pump gas or work turnstiles, all of which seems…off. (If she’s a founding Justice Leaguer again post-Infinite Crisis, as IC and JLoA have made clear, that means she’s spent at least the last 11 years living in the United States, on more than one occasion living with normal American families and even working in a fast food joint).

It’s hard to say just how much of the title’s current suckiness is Picoult’s fault and how much is editorial’s. At any rate, the results have been a story featuring the dense continuity that keeps new readers from easily getting into a comic (at the least, you'll have to have read about Max Lord's killing and the previous story arc of the title, and Manhunter sure wouldn' hurt) accompanied (ironically) by the sort of continuity errors that keep hardcore fans from supporting the book.

Picoult on Wonder Woman should have been a creative, public relations and sales slam dunk for DC (and were she writing a miniseries or original graphic novel, it probably would have been), but instead it’s simply turned into strike two on their Wonder Woman relaunch.

DC’s already announced the next writer: Gail Simone. Simone is a very good comic book writer (in addition to being a woman), a writer who at her absolute worst is still guaranteed to be able to deliver stories at least as good as Heinberg’s, but on a monthly rather than quarterly schedule. Which is great news.

The bad news? Simone’s Newsarama interview intimates that she’ll be working with the post-Infinite Crisis status quo, and, of course, there’s still four more issues of Picoult’s run, and another two-issue fill-in stint, before Simone takes over.

But not all is bleak for the Amazing Amazon! We at EDILW are planning to do our part to make things a little less grim for our favorite star-spangled shorts rocking heroine, which is why we’re launching a new feature this week—Wonder Woman Wednesdays. Each Wednesday we’ll have a Wondy-centric post, and the plan is to keep ‘em up coming at least until Simone begins her run on Wonder Woman or we run out of funny Golden Age panels to post out of context and make bad jokes about, whichever comes first.
Posted by Caleb at 6:23 PM

She’s one of only three comic book characters whose adventures have been in publication from the time she was created to the present (You know the other two).

You need the qualifier "Golden Age" in there somewhere; Spider-Man, among others, has had adventures in publication from the time he was created to the present.

Hey Jacob, I'm glad you noticed that so quickly. I fixed it. Yeah, those two words make a whole world of a lot of difference, huh?

>or we run out of funny Golden Age panels to post out of context and make bad jokes about, whichever comes first.

From what I've seen of the Golden Age WW, you should have enough to keep you going for a while.