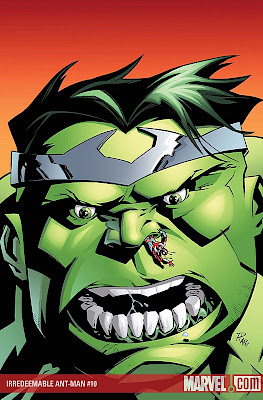 Another great Irredeemable Ant-Man cover, marred only by the fact that the Hulk is wearing a tiara in it.

CIVIL WAR CHRONICLES Written by MARK MILLAR & PAUL JENKINS. Penciled by STEVE MCNIVEN, RAMON BACHS & STEVE LEIBER. Cover by MICHAEL TURNER. Experience CIVIL WAR and it’s major tie-ins from AMAZING SPIDER-MAN, FANTASTIC FOUR, FRONT LINE and more in chronological order! The landscape of the Marvel Universe is changing, and it's time to choose: Whose side are you on? A conflict has been brewing, threatening to pit friend against friend, brother against brother – and all it will take is a single misstep to cost thousands their lives and ignite the fuse! As the war claims its first victims, no one is safe as teams, friendships and families begin to fall apart. The crossover that rewrites the rules, CIVIL WAR stars Spider-Man, the New Avengers, the Fantastic Four, the X-Men and the entirety of the Marvel pantheon! This issue reprints CIVIL WAR #1, and the “Embedded” and “Accused” stories from CIVIL WAR: FRONT LINE #1.

I’m actually pretty fascinated by this whole “Chronicles” scheme. With the singles already out, read, and analyzed and griped about (many of the key ones reprinted in extra-affordable collections), and now all the trades out or coming out, who wants to read it in this particular format, the ordering of the stories determined by Marvel editorial? Are there any potential readers left out there who either didn’t read the singles and and don’t want the trades, but wouldn’t mind reading the entire story in a series of portmanteau books like this?

Additionally, this format will really accentuate the story continuity glitches between the main mini and Amazing Spider-Man and Fantastic Four.

And while a certain amount of bullshit is acceptable in solicitation copy, I think claiming the series “stars” the X-Men is reaaallly pushing it. One scene of Emma Frost talking with Tony Stark and a couple of Bishop and Cable appearances in crowd scenes probably isn’t what a lot of people think of when they here the words “stars” and “the X-Men.” 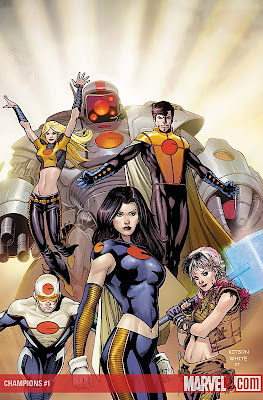 THE CHAMPIONS #1 Written by MATT FRACTION. Pencils and Cover by BARRY KITSON. Variant Cover by STEVE MCNIVEN THE CHAMPIONS introduces the all-new and Los Angeles-based crown jewel in Tony Stark’s FIFTY-STATE INITIATIVE. A team of Stark-branded and created super heroes, these young actors, athletes and models are infused with tremendous powers and even more tremendous fame, reborn as the First Super Hero Team of Tomorrow™ —THE CHAMPIONS. Here the same ol'-same ol' means hooking up at the Standard, drinks at SkyBar and a death-duel on Sunset Blvd. against some villain too stupid to realize that, in Hollywood, the good guys always win. The catch: you can be fired at any point along the way. And every inch of your life will be subjected to intense public scrutiny. And if you survive all that for a whole year, you'll face mandatory retirement. And there's no guarantee you'll live to see that retirement. If you had one year to save the world, what would you do?

I have a lot of resistance to this idea, in part because of Civil War exhaustion, in part because the second sentence sounds word for word like a description of 52’s Everyman Project and in part because it just doesn’t seem right not to have the actual Champions in a Marvel book called The Champions. Also, I’m already reading a dozen super-team titles, and Marvel’s launching 241 more in the next couple months.

But I’ve gotta say, Fraction’s work is more hit than miss, Kitson’s a great artist and I really dig that glowing cinder block thingy. This might be a wait-for-the-trader.


DEVIL DINOSAUR BY JACK KIRBY OMNIBUS HC Written by JACK KIRBY. Penciled by JACK KIRBY. Cover by JACK KIRBY. No gods from outer space could beat THIS Devil! Jack Kirby crossed into a new cosmos with this crimson carnivore and his faithful sidekick Moonboy! Now, for the first time, Marvel collects the King's saga of Devil Dinosaur in his prehistoric prime! Collecting DEVIL DINOSAUR #1-9.

Nooooo! I wanted an Essential volume of this, Marvel! 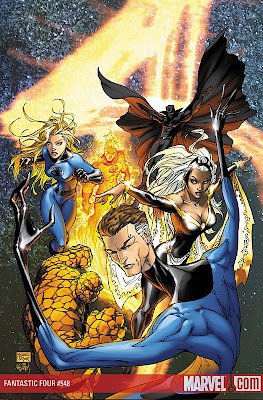 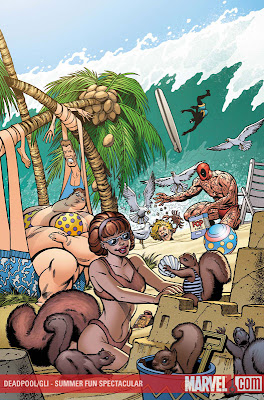 Squirrel in an old-timey bathing suit on the cover, eh? Sold. I’m easy that way.


THE HOOD PREMIERE HC Written by BRIAN K. VAUGHN. Penciled by KYLE HOTZ. Cover by KYLE HOTZ. With great power ...comes great opportunity. Nineteen-year-old Parker Robbins couldn’t afford college, but he was able to buy a ski mask and a Lorcin .380 handgun. After dropping out of high school, he hoped to follow in the footsteps of his late father, a soldier in the Kingpin’s vast criminal empire — but life in the mob isn’t always as glamorous as the movies make it seem. With a pregnant girlfriend, a demanding mistress and an institutionalized mother to care for, Parker can barely make ends meet. So when the small-time crook finds mystical apparel that grants him strange powers, he elects to forgo organized crime ... for the more prestigious and financially rewarding world of costumed villainy. Collecting THE HOOD #1-6.

Wait, can you have a premiere hardcover after you’ve already had a trade paperback collection, which has since gone out of print…?

INVADERS CLASSIC VOL. 1 TPB Written by ROY THOMAS. Penciled by FRANK ROBBINS, RICH BUCKLER, DICK AYERS & DON HECK. Cover by FRANK ROBBINS. The Big Three of Marvel's Golden Age—Captain America, the Human Torch and the Sub-Mariner—entered their first alliance when the U.S. entered World War II! But the Axis had more than bombs to throw at them, as they soon learned in a battle with the Star-Gods! The Red Skull wants the Invaders themselves as Hitler's top hitmen, and only a second gathering of Golden Age greats can stop him! Featuring the first appearances of Spitfire, Union Jack and more!COLLECTING INVADERS #1-9, GIANT-SIZE INVADERS #1 and MARVEL PREMIERE #29-30.

SUPER-VILLAIN TEAM-UP/M.O.D.O.K.'S 11 #1 (OF 5) Written by FRED VAN LENTE. Penciled by FRANCIS PORTELA.
Cover by ERIC POWELL. While the heroes are away fighting World War Hulk, the villains can play...M.O.D.O.K., sick of being hunted and hounded by A.I.M., gathers together an eclectic team of Marvel's Most Wanted to pull off one last, big score. But news travels fast along the grapevine of villainy —and pretty soon every bad guy in the Marvel Universe is gunning for the Big-Headed One's unspeakably powerful prize. Executing their heist may be the easy part, because getting away with their loot alive is going to be the real challenge for M.O.D.O.K.’s 11!

They had me at “M.O.D.O.K.’s 11 by Fred Van Lente.” I wonder what the point of the Super-Villain Team-Up in the title is, as it only buries the joke. 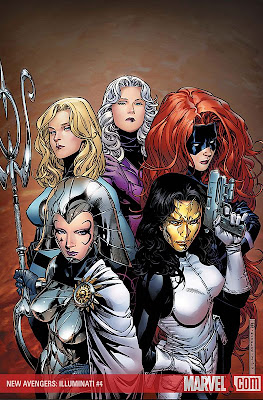 NEW AVENGERS: ILLUMINATI #4 (of 5) Written by BRIAN MICHAEL BENDIS & BRIAN REED. Pencils and Cover by JIM CHEUNG. They have faced the Skrull empire, the Hulk, the Sentry, the Infinity Gems and the Beyonder... but now the secret society of Marvel is faced with the one thing too much for even them... and the cover to this issue says it all. Oh, and there's this guy named Marvel Boy who declared war on the Earth.

Does it? ‘Cause I only recognize three-fifths of the women on the cover. Maybe if I knew the other two then I’d get the whole message.

Seeing how Bendis dealt with Grant Morrison’s Xorn in House of M and New Avengers, I’m deeply afraid of what he’ll do with Marvel Boy, but what the hell, Namor and Doc Strange are on the team, which makes this the closest thing to a Defenders title we have right now. 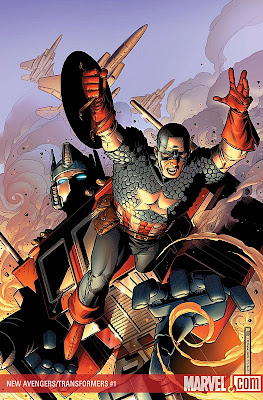 NEW AVENGERS/TRANSFORMERS #1 (of 4) Written by STUART MOORE. Penciled by TYLER KIRKHAM. Cover by JIM CHEUNG_It’s time to Assemble–and Roll Out! What in the world could unite Earth's Mightiest Heroes and the Autobots? Maybe the Decepticons and Dr. Doom know! War is about to break out on the border between Latveria and Symkaria -- unless two unique teams of heroes can unravel a dark mystery… that is, if they don’t destroy each other first! Stuart Moore (WOLVERINE, PUNISHER X-MAS SPECIAL) and Tyler Kirkham (X-MEN: PHOENIX WARSONG) bring together fan-faves like Wolverine, Megatron, Spider-Man and Optimus Prime in this all-new, four-issue, widescreen adventure!

This is such a crazy-ass pair of comics franchises that it’s either going to be completely stupid or completely awesome. I can’t wait to find out which. 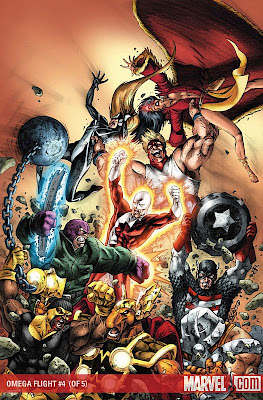 OMEGA FLIGHT #4 (of 5) Written by MICHAEL AVON OEMING . Penciles & Cover by SCOTT KOLINS. OMEGA FLIGHT VS. THE WRECKING CREW! Plus: the TRUE VILLAINS ARE REVEALED!

So Omega Flight is going to be fighting the Wrecking Crew for four months straight?

SHE-HULK #21 Written by DAN SLOTT. Penciled by RICK BURCHETT. Cover by GREG HORN. THE MOST IMPORTANT MARVEL COMIC YOU WILL READ ALL YEAR! "ANOTHER ME, ANOTHER U" Ever notice how in some Marvel comics, characters who are SUPPOSED to be dead show up with NO explanation whatsoever? Or in the wrong costume? Or acting in a way they NEVER have before? Well guess what, True Believer, there was a reason. And that reason is going to have She-Hulk and her friends working on some of their STRANGEST cases yet! Don't miss it—'cause this is the issue that fixes 90% of Marvel's continuity problems—from NOW ON!


I sometimes get the feeling that Dan Slott is the only writer at Marvel who actually reads Marvel comics, so if there’s a way to make sense of the discrepancies big and small, he’s probably the man to do it (Check out last week’s issue, for example, for an explanation as to why Armadillo and all those guys the Punisher “killed” at Stilt-Man’s wake aren’t, you know, actually dead). 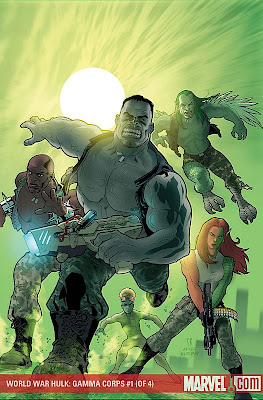 Hmm. The Leader’s look really only works for the Leader, huh? 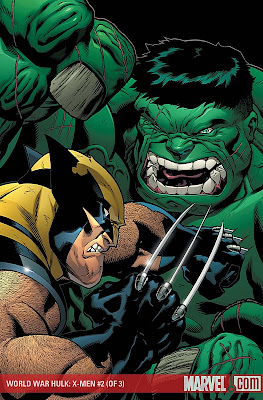 You know what’s great about this World War Hulk: X-Men cover? Hulk’s not wearing a tiara in it.


I’m actually incredibly nervous about this baton-passing. US-M has long been one of my favorite super-series, and probably the best superhero ongoing since it’s launched. (Certainly it’s been the most consistent). I guess I’ll soon find out how much of that was due to Mark Bagley vs. Brian Michael Bendis. Stuart Immonen’s style changes pretty often; I like his early DC work and his Nextwave, but his previous Ultimate work left me pretty cold.

That said, I’m unequivocally stoked for the debut of Ultimate Spot.

“Spinning out of Captain America” may be pushing it, but this was a very solid if shallow action adventure type series, featuring a horde of Marvel’s C-List merc villains. And at eleven bucks, it’s a steal.
Posted by Caleb at 3:00 PM

But ... but ... Thor! And Humbug possibly helping Miek and co take over the Earth, complete with a 'Spider-Man Loves Mary Jane'-style cover! Agents of Atlas in Marvel Adventures!

On the Illuminati cover, I recognize Lilandra, Sue Storm, and Medusa- the wives of three of the Illuminati members. So I'm guessing the other two are Clea and some lover of Tony Stark's. This ought to be interesting.

Madame Masque? Madame Mask? Something like that...I do know she appeared in Iron Man comics.

Also, "premiere" doesn't only mean "debut" - it also means "elite" or "principal", as I'm sure you're aware.