A few weeks ago, DC released the highly anticipated Wonder Woman #6, featuring the comics debut of new WW writer Jodi Picoult. The story featured Department of Metahuman Affairs (DOMA) Agent Diana Prince (Wonder Woman’s newly created secret identity) and her partner Tom “Nemesis” Tresser on assignment at a superhero theme park. Picoult’s portrayal of the character as a fish-out-of-water trrying to come to grips with life in the modern, mortal world was somewhat controversial among Wonder Woman fans, with some loving it, some hating it and some remaining completely ambivalent.

But the part that really stuck with me was this first scene, in which a disguised Wonder Woman tries to order a milkshake named after her: 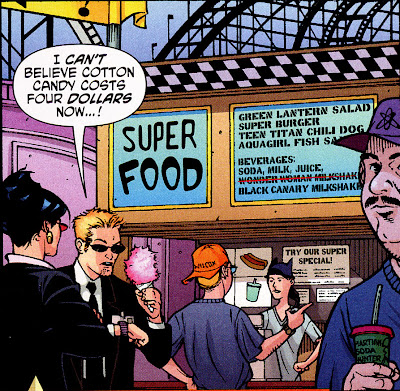 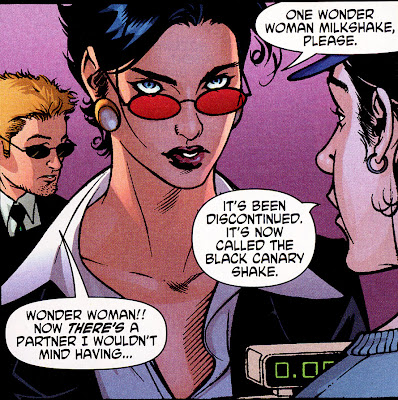 Now, a Green Lantern Salad, an Aquagirl Fish Sandwich and a Teen Titans Chili Dog all sound somewhat self-explanatory. But what exactly was a Wonder Woman milkshake? Was it simply a milkshake that had Wonder Woman's name attached and then, when her popularity dipped, they replaced her name with Black Canary's? Or does the milkshake itself reflect upon Wonder Woman, in the way that, say, Superman ice cream is red, blue and yellow, or Ben and Jerry's brand Phish Food has little fudge fish shapes in it? And if that was the case, what on earth would a Black Canary milkshake be, seeing as how black-colored sweets are rather few and far between, and often involve licorice flavor, not exactly the most popular flavor these days.

After thinking about it off and on for the last few weeks, I've come up with a couple of recipes, but I'm not entirely happy with either of them, so I thought I 'd ask the blogosphere to give the matter some thought and submit some recipes. So welcome to the first-ever Every Day Is Like Wednesday contest! Here's the deal: E-mail me your recipe for a Wonder Woman milkshake and Black Canary milkshake at jcalebmozzocco@gmail.com before May 1st, and I'll post 'em here.

Here's what I came up with, to serve as examples:

Blend 2 scoops of ice cream and soy milk until smooth. Place remaining scoop of ice cream on top serving glass for garnish, with whichever piece of fruit you've chosen on top. Serve with a long spoon for eating the scoop and straw for drinking the shake.

3 scoops of dark chocolate ice cream (as dark as possible)
2-3 cups of chocolate milk, depending on desired thickness

Blend the ice cream and chocolate milk until smooth. Garnish with a yellow Marshmallow Peep impaled festively upon the straw.

That's the best I can come up with. I assume you guys can probably do better.

Now, I know what you're thinking. Why on earth should I waste your time thinking of superheroine-inspired milkshake recipes, typing them out and emailing them to me? What, in other words, is in it for me? Are there prizes involved?

Yes, yes there are. I use the term "prize" rather loosely, though. The winner will receive his or her choice of one of the following pieces of original, Justice League and milkshake-related art, as drawn by me on extra backing boards lying around my apartment (See, there are worse superhero artists than Michael Turner). In addition to the fame and notoriety that comes with having your name and recipe posted on EDILW, the Internet's 7,305th most popular weblog dealing with comic books. 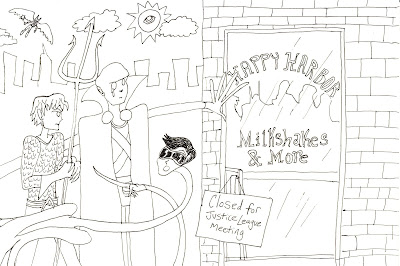 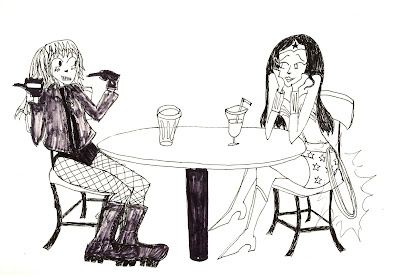 Black Canary and Wonder Woman have an awkward conversation over milkshakes, during which Dinah remembers that she's late for a very important team-up with Green Arrow


(Note: While welcome to participate, Jodi Picoult is inelligible for the prizes as she is the only person who actually knows what would be in a Wonder Woman and Black Canary Milkshake. )
Posted by Caleb at 11:12 AM

I'd teach you, but I'd have to charge.

I can't help but think of that terrible song when I see a sign for Wonder Woman and Black Canary Milkshakes.

You are overthinking the whole thing, worried about looks, and especially about flavor. This is an amusement park, "food" is something that comes out of a machine at the press of a button. The only recipe is "open container, pour in back of machine." And the only way to differentiate which "flavor" you get is by a gimmick. Inspired by your use of Peeps, I am thinking toy straws.

For Wonder Woman, a two sided straw that you spin between your hands. On one side, and image of Wonder Woman. On the other, an image of uh, "Lynda Carter". (You have to wonder what her carrer looks like in the DCU. Well, I have to.)

For Black Canary, a straw that doubles as a whistle. Very loud and prone to misuse, which means that parents will hate it. So of course it will be a kid favorite!

I'd say gimmick straws sound right. But after Wonder Woman's little thing with Max, they briefly made straws that you had to violently snap in order to break an obstruction in the straw and be able to drink it. The Black Canary straw had something lodged in the bottom of it so that you had to blow strongly (sorry...closest to a scream motif, which unfortunately has a sexual undertone).