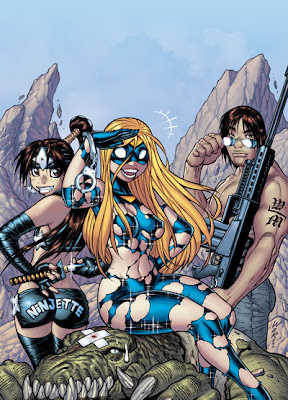 Everything okay in your life?

I'm okay. I'm a little bummed because I just realized I made a huge tactical error in my schedule arrangement tonight. A friend of mine has a film festival here in Columbus, and tonight was its opening night. So I went to take in the prosaically titled but actually quite good Waitress.

Two hours later, it hit me that today is Thursday, April 19th and at the exact same time that Waitress was playing, two miles down the street, the still-in-production Eisner documentary Will Eisner: The Spirit of an Artistic Pioneer was unspooling at the Wexner Center for the Arts.

I probably shoulda been watching that instead, and then posting about it here.

In happier news, Las Vegas Weekly ended up using my lame W. Somerset Maugham joke headline on this week's comics column. To pull the curtain back a bit, each weekend when I submit my column for the following Thursday's issue, I usually include a headline suggestion, which the editors will either choose to use or, if it's too stupid, will choose not to use and instead make up their own, superior headline.

I had a hell of a time thinking of one that would be appropriate for a column that covers both Adam Warren's sublime superhero bondage comic strip-com Empowered and K. Thor Jensen's autobiographical book about his Greyhound journey across America, Red Eye, Black Eye. At least until I realized that not only did W. Somerset Maugham write Of Human Bondage, but also something called The Vagrant Mood, and what is "vagrant" but another word for "drifter" or "hobo," terms Jensen kept applying to himself in his book?

So "Of superhuman bondage and the vagrant cartoonist's mood" it was. And they used it. Woo hoo!

Anyway, click on the words "comics column" above to read reviews of Empowered and Red Eye, Black Eye, which are both pretty excellent books (We'll be taking a closer, scantastic look at the Columbus chapter of Red Eye, Black Eye later this week). While you're at lasvegasweekly.com, you may want to check out the cover story, "The Most Beautiful People in Las Vegas" (Or at least look at the pictures).

And while I'm linking, The Absorbacon has the only piece of DC fan fiction you ever need to read, in which Aquaman busts in on Brad Meltzer's JLoA and sets "Clark," "Bruce" and "Diana" straight, and The Invinicible Super Blog reviews the greatest story entitled "World War III" DC ever published (and it didn't come out yesterday).

Now if you'll excuse me, I'm going to go kick myself for missing that Eisner flick...
Posted by Caleb at 8:13 PM

Dang, I missed the Eisner thing, too. I'm hanging up my geek badge.

The Eisner movie was great. A little on the short side, though.
I was expecting a large crowd (like the one attending the Scott McCloud lecture), but it was maybe half full.

There was a lot going on film-wise that night. In addition to the film fest, I think there were four freen press/word-of-mouth screenings (including one for Hot Fuzz, which I also forgot about)

How was the movie?

The movie combined lots of talking head footage (Michael Chabon, Kurt Vonnagut, Gil Kane, Denis Kitchen,etc. plus Eisner and his wife) with some audio footage from interviews Eisner had conducted in the early 1980's (Kirby, CC Beck, Kubert). There was also some taped material from the 2004 SanDiego Con and Eisner Awrds.

The movie was well done, but I thought it could have dug a little deeper. There wasn't a lot of new information or analysis...just a good, solid bio.