The Dynamic Duo trail Catwoman to her secret island hideout, but she attacks in her fearsome catplane, with real cat-claw action, forcing Batman and Robin to make an emergency crash landing. Our heroes are at the mercy of the Feline Fatale and her bloodthirsty henchmen, who suggest unmasking the heroes and shooting them dead immediately.

But Catwoman has a "better" idea... 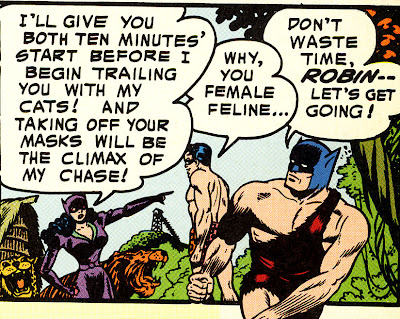 I found this story in a late-'80s editon of The Greatest Batman Stories Ever Told. I think it's pretty clear why.
Posted by Caleb at 7:36 PM

I think Catwoman and I could be best friends.

Freaky, I'm reading that same book right now! Just pointed out the wonderful absurdity of Batman still wearing his cowl while in his Tarzan skins!

pointed out to my girlfriend.

posting on blogs while at work is a bad idea.